Prime Minister Najib Abdul Razak took two and a half hours to unveil the details of Budget 2014 today. 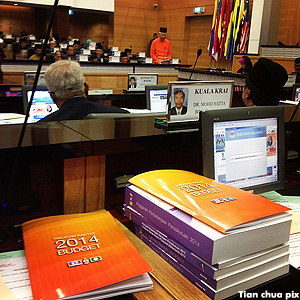 Clad in a bright orange 'baju Melayu', Najib - to the delight of Pakatan Rakyat MPs as they waved their orange alternative budget booklet - started to address Parliament at 4pm.

Malaysiakini brings you the salient points of the budget speech here as it unfolds.

You can also check out the updates on Twitter @malaysiakini and Facebook.com/malaysiakini.

In his speech, Najib takes potshots at Pakatan over allegations there were 40,000 Bangladeshis voting in the 13th general election.

"However, this does not include the 40,000 Bangladeshis who were

brought in as phantom voters in the recent 13th general election as alleged by the opposition. Till today no one has even seen them or their shadow. Enough of lies. Ask for forgiveness from Him."

The theme of Budget 2014 is 'Strengthening economic resilience, accelerating transformation and fulfilling promises'.

Issues of economic concern in 2013

Twitterjaya still has humour after Najib took their sugar

No goodies, but gov't splurges will continue

GDP growth of 5 to 5.5pct forecast