"We are in agreement with the High Court judge," the chairperson of the three-member appellate court, justice Alizatul Khair Othman, said this afternoon.

"Hence, we dismiss the appeal," she said.

Justice Alizatul also allowed costs of RM5,000 to be paid to Mkini Dotcom.

Earlier, Malaysiakini lawyers had applied that costs of RM20,000 be paid in the appeal.

The other Court of Appeal judges are justices Anantham Kasinather and Varghese George Varughese.

Senior federal counsel Norhisham Ismail said he will await instructions on whether to appeal the decision.

If the Home Ministry and government appeal today’s decision, then the appellate court will have to write the written grounds.

Mkini Dotcom named the Home Ministry secretary-general, the home minister and the government as respondents.

Mkini Dotcom applied for the permit under Section 6(1)(a) of the Printing Presses and Publications Act 1984 to publish a daily named ‘Malaysiakini’.

The company had applied to publish 40,000 copies in the Klang Valley to be sold at RM1 a copy, but the Home Ministry rejected this in August 2010. 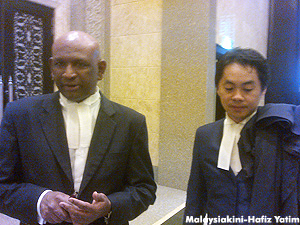 Meanwhile, Malaysiakini lawyer K Shanmuga said with the decision as in the High Court, the independent online daily can re-submit its application for a publication permit.

Fellow lawyer Edmund Bon said the court may have considered that the government should not have restricted competition in not allowing Malaysiakini to be published as a newspaper.

The High Court in Kuala Lumpur had last year quashed the Home Ministry’s decision not to issue a publishing permit to Mkini Dotcom.

Publication a matter of right

Justice Abang Iskandar Abang Hashim, who ascended to the Court of Appeal last month, ruled in the landmark decision that the granting of a publication permit is a matter of right and not privilege under the Article 10 of the federal constitution on freedom of expression.

He also recognised that the news portal had won numerous awards in the past.

Justice Abang Iskandar in his decision also said the minister should have given reasons for rejecting Malaysiakini’s publishing permit application as the government’s decision had implications on fundamental rights as it affected livelihood, equality and freedom of expression.

He said while the federal constitution recognises there can never be absolute freedom, there cannot be wanton limitations placed on the importance of fundamental liberties as recognised under Article 10.

Abang Iskandar noted the Federal Court also recognises the freedom of the press to propagate and disseminate information and circulate views.

The judge disagreed with the home minister that by allowing Malaysiakini to go into print would otherwise result in confusion. He said such an allegation was not supported by facts nor evidence.

The home minister in his affidavit stating reasons for not granting the permit said there are already a lot of newspapers and it would affect their profit margin.

Justice Abang Iskandar rejected this argument, saying there was nothing within the Printing Presses and Publication Act that empowers the minister to regulate the market.

Earlier in the Court of Appeal hearing today, senior federal counsel Norhisham Ismail submitted that the granting of a permit was not a right but a privilege and told the court that the minister in his affidavit had cited that the website had published reports on many controversial issues.

Shanmuga had earlier submitted that the Home Ministry cannot limit the portal’s right to publish a newspaper.

Publishing permit a privilege, not a right, argues gov't