In a statutory declaration (SD) today, Charles Suresh Morais said when he saw the charge sheet that appeared on the website on July 30, he recognised his brother's initials.

“After having looked at the (two-page) draft charge sheet once again, I noticed that one of them was amended and initialled.

“After studying that particular charge sheet in detail, I noticed that the initial next to the amendment made was that of my brother, Kevin. I am familiar with his signature and his initials,” he said in the SD.

Charles, who was accompanied by lawyer Americk Sidhu, revealed the SD in a press conference in Kuala Lumpur. 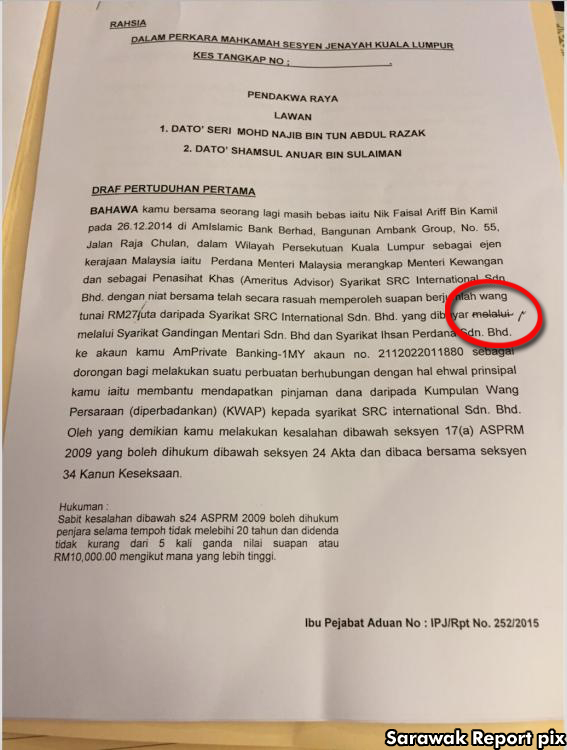 When contacted today on the statutory declaration, he replied: "I am overseas. Thank you."

Charles said in his statutory declaration that he always kept in touch with Kevin, including making two or three phone calls a month and constant e-mail correspondence.

He also claimed that two to three months ago before Kevin's murder in September, he said the deputy public prosecutor told him that he had been working on a case involving Najib and his wife Rosmah Mansor.

In the SD, the younger brother also claimed that Kevin ( photo ), who was seconded to the Malaysian Anti-Corruption Commission (MACC), had described the pair in an unfavourable light.

“He told me his phone might be tapped and to be careful what I said. That is why half our conversations were usually in Malayalam,” he said.

The MACC has been investigating the RM2.6 billion political donation and RM42 million from SRC International which were deposited into the prime minister’s personal accounts.

In the SD, Charles said he later approached Rewcastle-Brown about the charge sheet and it was revealed the document was sent from an e-mail called "[email protected]".

Charles said he was convinced that the e-mail came from Kevin.

He said the name "jibby" refers to the babysitter who had cared for both Kevin and Charles.

"Kevin was working directly under the attorney-general at that time and would have been privy to the type of information as appeared in the draft charge sheets.”

Lies, IGP says of claim he summoned Kevin on links to Najadi murder

Kevin gave me info on probe on powerful individuals: brother

Brother: There was conspiracy to rid of Kevin's body