Every year, without fail, Malaysiakini has named a top newsmaker as we bring the curtain down on the year.

A newsmaker is defined as “someone whose actions make news headlines, who effects the course of public discourse and creates an impact in Malaysian politics, for better or worse”.

Malaysiakini has nominated 10 candidates for the Newsmaker of 2015 award. A total of 1,140 participated in the seven-day poll, opened only to paying subscribers of the news portal.

They voted by indicating their preference for each of the nominees - one vote being the lowest and 10 the highest.

This is the 15th year of Malaysiakini’s Newsmaker of the Year award, and over the past decade and a half, one individual has consistently hogged the headlines. He is none other than former prime minister Dr Mahathir Mohamad - a man loved by some, hated by many.

Mahathir was picked Newsmaker of the Year twice - in 2005 (with Rafidah Aziz) and in 2006. And Malaysiakini readers have voted him, again, as Newsmaker of 2015. 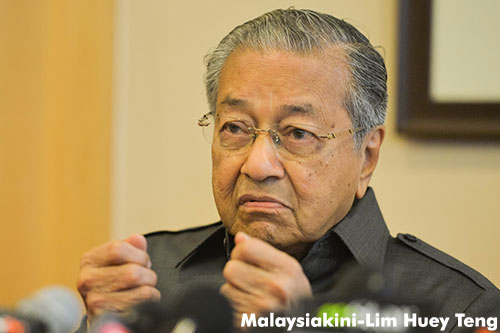 Mahathir has, for most part of this year, led the campaign to oust Prime Minister Najib Abdul Razak but as the year comes to a close, he has yet to dislodge the man he had a hand in ushering into power.

No 2 on the list is another individual who has made headlines over the years, the nemesis of Mahathir – former deputy prime minister Anwar Ibrahim, who is currently serving a five-year jail sentence for sodomy.

Najib, the embattled PM who is being hit by a slew of scandals and yet somehow able to hold on to his job, is No 3. Following him closely behind is the vocal deputy prime minister whom Najib sacked, Muhyiddin Yassin.

No 5 is the late Kevin Morais, the deputy public prosecutor (DPP) who was brutally murdered and his body found in a cement-filled steel drum dumped in a swamp. Next is the 2013 Newsmaker of the Year, Rosmah Mansor – the controversial wife of PM Najib and self-styled First Lady of Malaysia.

Another woman is No 7 on the list - Maria Chin, the Bersih 2.0 leader who organised the unprecedented three-day mass rally in August. She may perhaps step in the shoes of another Bersih leader, Ambiga Sreenevasan, who was Newsmaker of 2012.

Sirul Azhar Umar, the convicted murderer seeking to escape death for the murder of Mongolian woman Altantuya Shaariibuu, is No 8. He is currently held in Sydney and is fighting extradition to Malaysia.

The final two on the list are, respectively, the man who replaced Muhyiddin as deputy prime minister, Home Minister Ahmad Zahid Hamidi, and BN strategic communications director Abdul Rahman Dahlan, who is minister of urban wellbeing, housing and local government.