Among others, critics question why the nation’s self-styled strategic investment firm is selling prime land it obtained from the government for a song, to a foreign entity.

This was compounded when China Railway’s notice to the Hong Kong Stock Exchange showed a price tag lower than what was announced by 1MDB.

Critics also raised concern that the sale will raise China Railway’s chances of winning the bid for the plum High Speed Railway project from Bandar Malaysia to Singapore. 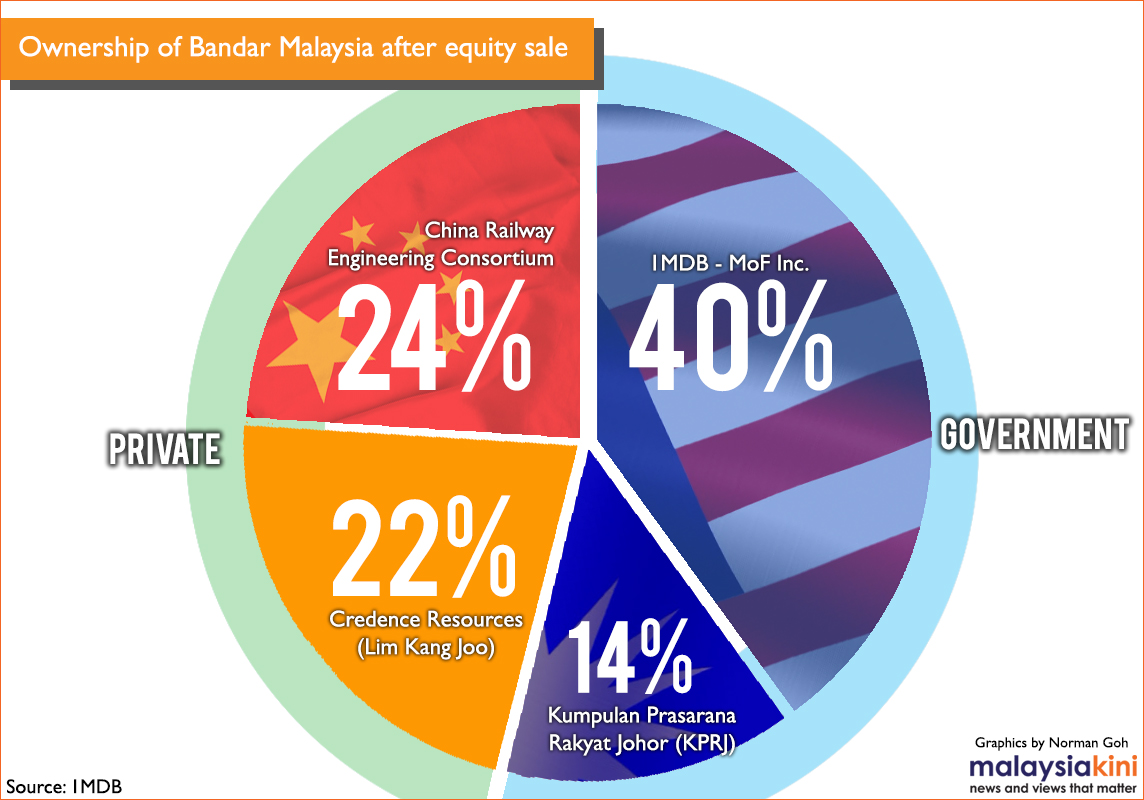 1MDB responds to the concerns below:

The current proposed deal structure, is for a new special purpose vehicle (New SPV 1) to be formed, that will directly purchase the land (or indirectly purchase, for example through a New SPV 2 or through purchase of equity in Bandar Malaysia Sdn Bhd).

New SPV 1 will ultimately own all 16 plots of the Sg Besi land and develop the Bandar Malaysia project.

New SPV 1 will be owned 40 percent by 1MDB or Minister of Finance Incorporated (MoF Inc) and 60 percent by the IWH-CREC Consortium.

The consortium shareholding is 40 percent CREC and 60 percent IWH.

So, given the above shareholdings of the various parties the ultimate New SPV1 ownership can be described in the following ways:

40 percent 1MDB or MOF Inc (should the shares be transferred), 36 percent IWH and 24 percent CREC.

Or, in the alternative:

In essence, 1MDB is selling land, which is what we own. However, there are two liabilities indirectly linked to the land:

As the construction will continue to be carried out by the current approved contractors, there is therefore no question of any impact on national security through the sale by 1MDB of its 60 percent interest in the Bandar Malaysia project.

To determine the final purchase consideration to be received by 1MDB, the starting point, as agreed in the Share Sale and Purchase Agreement (SSA) executed between 1MDB and the consortium, is 100 percent of the land value = RM12.35 billion.

a) determination and agreement between the parties of the final costs for the PUKL Relocation and the sukuk and;

b) all relevant consents, including but not limited to, from the government of Malaysia, the contractor (PPHM) and sukuk investors.

However, if the costs cannot be agreed or the consent cannot be procured, then the purchase consideration of RM7.41 billion will be paid in full to 1MDB, who will still be responsible for the costs.

In either scenario above, the purchase consideration of RM7.41 billion to 1MDB does not change; the only difference is whether 1MDB receives the amount in full, then pays for the costs or whether the consortium pays for its share of the costs and remits the balance of RM5.3 billion to 1MDB.

1MDB and the consortium both confirm that HSR is an entirely separate project, whose award will ultimately be determined jointly by the governments of Malaysia and Singapore, per a separate process, that is, and will not be linked or be contingent on, in any way, to the sale of 1MDB equity in the Bandar Malaysia project.

Bandar M'sia sale - 'Heads will roll on day of reckoning'