Investigators in two countries believe that US$155 million (RM603 million) from 1MDB went to production company Red Granite Pictures to make the 2013 hit movie ‘The Wolf of Wall Street’, according to a Wall Street Journal ( WSJ ) report.

The money from Malaysia’s troubled investment fund was transferred to Red Granite in 2012 through a circuitous route involving offshore shell companies, said WSJ , according to people familiar with the probes, and supported by documents reviewed by the global financial daily.

Prime Minister Najib Razak’s stepson Riza Aziz, 39, is the chairperson of Red Granite, a production movie house set up on 2010.

Despite being virtually unknown, Red Granite raised US$100 million to make ‘The Wolf of Wall Street’, a sex and drug-fuelled story of a penny-stock swindler starring Hollywood actor Leonardo DiCaprio.

“The US Federal Bureau of Investigation (FBI) has issued subpoenas to several current and former employees of Red Granite and to a bank and an accounting firm the company used, according to people familiar with the subpoenas,” said the WSJ report.

A spokesperson for Red Granite said that the company was “responding to all inquiries and cooperating fully” with the investigations. He said the production house had no reason to believe the source of its financing was irregular. 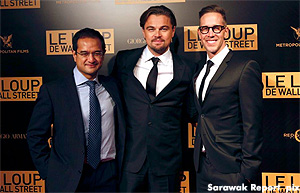 Riza ( far left in photo ) had previously denied that Red Granite was funded by money originating from Malaysia. He said in a 2014 New York Times interview that its main investor was Abu Dhabi businessman Mohamed Ahmed Badawy Al-Husseiny.

“Mr Al-Husseiny is an American who then headed Aabar Investments PJS, which is an arm of an Abu Dhabi sovereign-wealth fund known as IPIC. The state-owned firms did business with 1MDB. For instance, IPIC guaranteed some of the Malaysian fund’s bonds.

“In connection with the IPIC guarantees, 1MDB reported in corporate filings that in 2012, it sent $1.4 billion to Aabar as collateral,” said WSJ .

'Money went to a separate company'

According to investigators, the money did not go to Aabar but to “a separate, almost identically named company that Mr Al-Husseiny had helped set up in the British Virgin Islands, called Aabar Investments PJS Ltd”.

“The investigators believe about US$155 million of this money then flowed to Red Granite Capital, a firm Mr Aziz had formed to fund the film company.”

WSJ said documents show three transfers to Red Granite Capital in 2012 - US$60 million, US$45 million, and US$50 million.

Of this, US$105 million was booked by Red Granite Capital as a loan, while the other US$50 million was moved to the company through intermediaries.

“Among the intermediaries, according to people familiar with investigations and the person familiar with 1MDB: Telina Holdings Inc, a company that had been set up in the British Virgin Islands by Mr Al-Husseiny and his boss, Khadem Al Qubaisi.”

Since the launch of the global investigations, both men were removed from their posts in Abu Dhabi.

According to WSJ , the US$50 million loan from Telina Holdings has been repaid, citing people familiar to the investigations.

While the Red Granite spokesperson told WSJ that the company “has been repaying and will continue to repay all its loans”, it is unclear to whom Red Granite would repay the US$105 million loan.

“Red Granite had no reason to believe at the time that the source of Aabar’s funds was in any way irregular and still believes the loan to be legitimate,” WSJ quoted the film company spokesperson as saying.

‘The Wolf of Wall Street’ went on to make about US$400 million at the box office and was nominated for five Academy Awards, including best picture.

“There is no indication any profits from it flowed to 1MDB or Malaysia,” said WSJ . Those involved did not respond to numerous requests for comment by WSJ .

Both Najib and 1MDB have consistently denied wrongdoing in this matter, with Najib saying that all the controversy plaguing him were part of a conspiracy to topple him.

When Red Granite first came onto the scene in 2011, they had thrown a ‘million-dollar beach extravaganza’ at the Cannes film festival, said WSJ , complete with fireworks and performances by Kanye West and Pharrell Williams.

WSJ also reported that Red Granite’s office on Sunset Boulevard was filled with Hollywood memorabilia, including a rare original poster for the 1927 Fritz Lang science-fiction film ‘Metropolis’ ( image ), which cost US$1 million, according to people familiar with it.

Later, during the filming of ‘The Wolf of Wall Street’, while celebrating DiCaprio’s birthday, WSJ said the filmmakers gifted the star with Marlon Brando’s 1955 Oscar statuette for best actor in 'On the Waterfront'.

The statuette is said to have been acquired for around US$600,000 through a New Jersey memorabilia dealer.

Around the end of the filming, many of those involved were reported to have celebrated New Year’s in Australia and then taking a rented jetliner to Las Vegas in time to celebrate it again.

Then, WSJ said that according to people familiar with the excursion, six months after the debut of the film, controversial businessman Jho Low, along with Riza and DiCaprio, attended the Brazilian World Cup and spent time on a 482-foot yacht owned by Sheikh Mansour Zayed Al Nahyan, chairperson of of IPIC.

“Sheikh Mansour, who is also the deputy prime minister of the United Arab Emirates, did not attend, they said,” reported WSJ .

WSJ said 'The Wolf of Wall Street' helped establish Red Granite as a player in Hollywood.

WSJ reported the firm’s spokesperson saying investigations into 1MDB “will not affect our ability to move forward with the exciting projects Red Granite is developing.”

Malaysiakini has contacted 1MDB and the Prime Minister's Office for their responses to this matter. 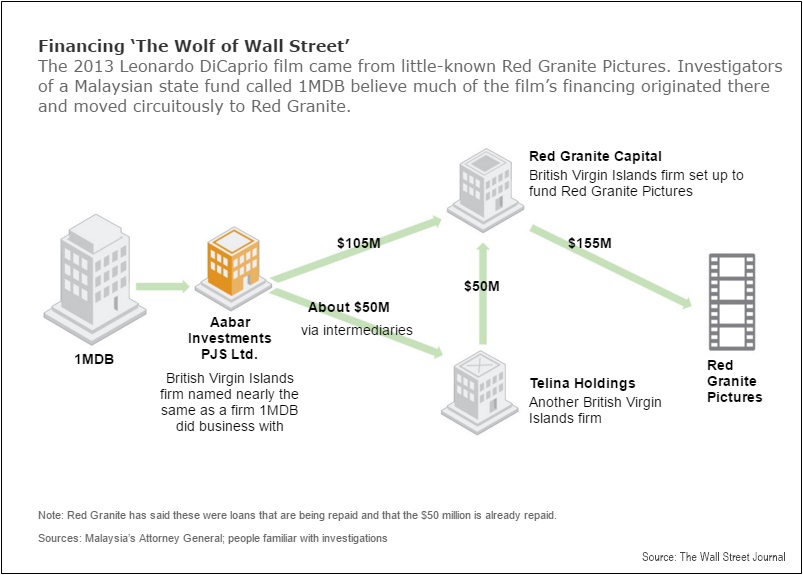