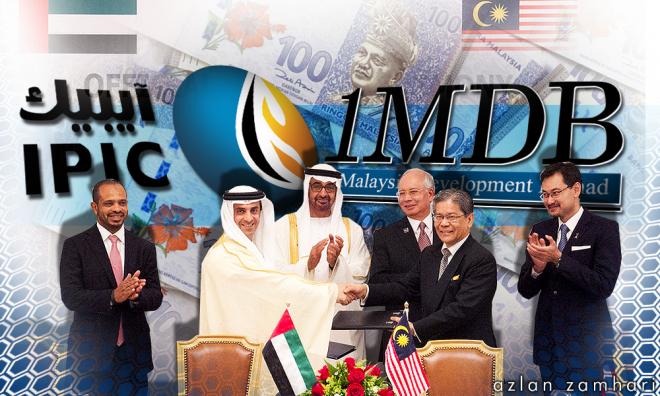 According to the Wall Street Journal ( WSJ ), United Arab Emirate authorities have issued travel bans on and frozen the assets of two former executives the Abu Dhabi sovereign-wealth fund International Petroleum Investment Company (IPIC) in an escalation of its probe into monetary transactions involving 1MDB.

The UAE’s actions indicate authorities have moved ahead in their probe into the dealings of Khadem Al Qubaisi and Mohammed Badawy Al Husseiny, both of whom had close connections to 1MDB.

Al Qubaisi, who is a UAE citizen, was the managing director of the US$80 billion investment fund, while Al Husseiny, an American, was chief executive of Aabar Investments PJS, which is owned by IPIC.

Whistleblower site Sarawak Report had earlier reported that Al Husseiny was being detained by UAE authorities pending extradition to the US for questioning in the American probe into 1MDB by the US Department of Justice.

The UAE probe is focusing on whether Al Qubaisi and Al Husseiny used the British Virgin Islands-based Aabar to funnel money from 1MDB into various accounts and companies around the world.

Citing people ‘familiar on the matter’, WSJ said executives at IPIC have been examining the activity of both men since last summer.

“UAE authorities got more involved in the investigation earlier this year, spurred in part by the Swiss investigation.”

The UAE probe is focusing on Al Qubaisi and Al Husseiny, who, until last year, were two of 1MDB’s most important contacts in Abu Dhabi.

Both men have been replaced in their positions. The men’s names disappeared earlier this week from the website of Bahrain’s First Energy Bank, where they were previously listed as board members.

Meanwhile, in a separate article, the WSJ also reported that the Luxembourg unit of Edmond de Rothschild Group said it is “cooperating” with an official investigation of money that may have flowed from 1MDB.

The news follows an earlier announcement on Thursday by the office of Luxembourg’s state prosecutor that it is investigating whether hundreds of millions of dollars sent to an account at a bank in Luxembourg originated from 1MDB.

This reportedly has ties to investigations into bonds raised for 1MDB being looked into by Swiss authorities.

WSJ said the Luxembourg prosecutor said in a statement last Thursday that its inquiry is focused on the movement of funds through a number of accounts of offshore companies in Singapore, Switzerland and Luxembourg.

The investigation centers on the flow of 1MDB money related to two bonds the fund issued in May and October 2012.

1MDB, however, said it had not been contacted by authorities in Luxembourg.

Although the Luxembourg prosecutor did not give details of the bonds, the prosecutor appears to refer to two bonds that Goldman Sachs Group Inc. sold for 1MDB in May and October 2012, raising a total of US$3.5 billion.

Malaysiakini has contacted 1MDB and the Prime Minister's Office for their responses to this matter.

Is the anti-Najib coalition a united front?