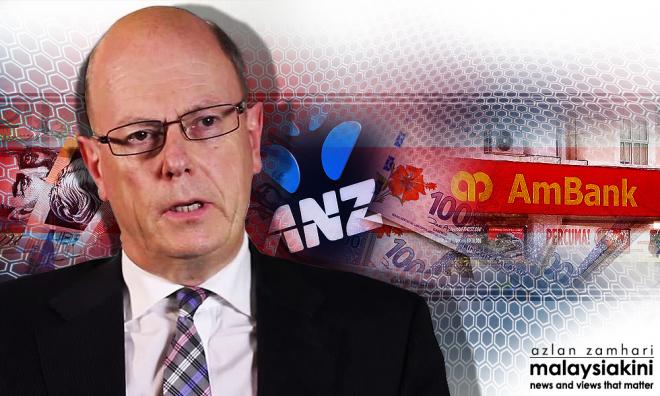 An executive with one of Australia's top banks was grilled by a parliamentary inquiry committee in the country yesterday, over its links to the 1MDB scandal.

ANZ owns 24 per cent of AmBank, and had three of its own on the Malaysian bank's board.

Hodges himself is set to be an AmBank board member.

The Sydney Morning Herald reported him as saying ANZ was limited in what it could do to address the scandal as it was only a minority shareholder.

"It's a more nuanced issue to be honest. Clearly the directors on that board are not allowed to talk about what's going on. We don't control that bank.

"As an ANZ executive and one (who) is about to join the board, are we happy with that? Certainly not.

"But that's different to implying the culture or the integrity of someone is lesser because they sat on that board," Hodges told the parliament committee.

ANZ may sell stake in AmBank

The Australian had previously reported that ANZ may be looking to sell its stake in AmBank because of the scandal.

It is also reported that ANZ, together with another Australian bank, NAB, are currently being probed by Singaporean authorities in regard to the 1MDB scandal.

Last week, Australian Broadcasting Corporation 's 'Four Corners' reported that more than US$1 billion had flowed through Najib's accounts from 2011 to 2013.

It also furnished a letter from a Saudi prince detailing a US$375 million gift to Najib.

Putrajaya later claimed that the letter confirmed Najib’s stand and the findings of the authorities regarding the sum in his bank account.