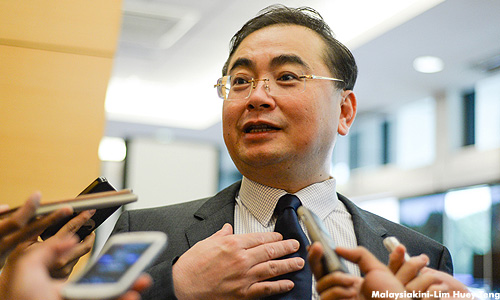 Wee Ka Siong: I too will quit if Hudud Bill passed

MCA deputy deputy president Wee Ka Siong has followed in the footsteps of his BN colleagues to say he will resign from the cabinet should the contentious 'Hudud Bill' be passed in Parliament.

"We have the duty and obligation to express our strongest opposition to the bill.

"Hence, we will relinquish our ministerial positions should the bill be passed in the Dewan Rakyat.

"This is not a threat but a responsible decision of MCA leaders," said Wee, a minister in the Prime Minister's Department, in a statement today.

On Thursday in Parliament Minister in the Prime Minister's Department Azalina Othman Said proposed to move Hadi's bill up the queue on the order paper, and was seconded by Deputy Works Minister Rosnah Abdul Rashid Shirlin.

The bill had been skipped over in the past two parliamentary sessions.

Prime Minister Najib Razak downplayed the bill as having nothing to do with hudud implementation, but merely concerned amendments to enhance punishment under syariah law, and had "nothing to do with non-Muslims".

'Solve it within BN'

Wee, writing from abroad, said the bill would "undermine the basic structure of our federal constitution and pave the way for subversion of our secular governance system".

"Certain parties claim that the bill is not a Hudud Bill as it only seeks to enhance the syariah court's power to dispense punishments.

"However, we must not take any chance by assuming that the bill will have no implications to Malaysians at large," said Wee.

He urged party members to continue to take up the issue "within the BN framework".

"MCA will never compromise on this issue. We will make every effort to oppose it under the BN framework and spirit.

"The BN spirit refers to the consensus decision making process of the component parties.

"Under this mechanism, all component parties have equal footing. At the end, should we fail, it also means the failure of the BN spirit," said Wee.

Gelang Patah MP Lim Kit Siang in a statement however called the threats to quit "meaningless" and lacking in substance.

He said the BN leaders should instead demand that Azalina and Rosnah be repudiated by cabinet and sacked, and steps taken to ensure the bill is not heard in Parliament.

Lim also asked what Liow and Mah had done to stop Azalina from proposing to move Hadi's bill up the queue.

He claimed a Sabah BN party had written to Najib a day earlier expressing objection to any plans to move Hadi's bill up.

More than meets the eye in Hadi's Hudud Bill affair

Hudud will affect all M'sians, not just Muslims

Uproar over Hudud Bill: Much ado over nothing?