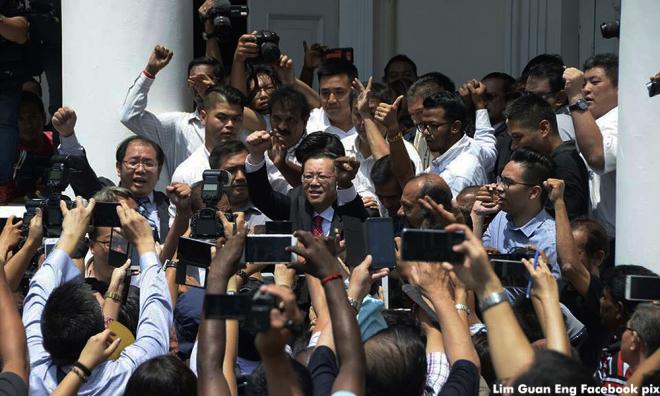 I will die standing than live on my knees, says Guan Eng

COMMENT The two charges against me under the Malaysian Anti-Corruption Commission (MACC) Act and the Penal Code for corrupt practice are a clear act of political persecution motivated solely to destroy me as Penang chief minister.

I had explained to MACC that the purchase of the bungalow from Phang Li Koon is above-board, an arms-length transaction on a willing buyer and  seller basis without any coercion or special favours granted from me or the state government.

Phang is a friend of my wife and has no active business relationship with the state government. She is not a housing developer and the bungalow she sold me for RM2.8 million was built in the 1980s.

There have been attempts to draw similarities between my case and former Selangor menteri besar Mohd Khir Toyo. This is wrong.

Unlike Khir Toyo’s case, Phang did not make a loss of RM5 million but recorded a small profit of RM300,000 from her original purchase price of RM2.5 million.

Unlike Khir Toyo’s case, Phang is not a housing developer that has to be reliant on state government to continue her business.

On the second charge relating to the approval of Magnificent Emblem Sdn Bhd's (MESB) application to re-zone its land from agricultural to residential use, MESB did not succeed in re-zoning its property to residential (purpose). The property still remains an agricultural land.

What benefit is there to MESB when it could not get final re-zoning approval to agricultural (use) from Majlis Bandaraya Pulau Pinang?

Clearly, there is nothing wrong with Taman Manggis land sale and instead I am charged with making a decision for MESB that finally did not gain them any benefit.

Sadly, there is no corruption with huge RM50 billion debts or RM2.6 billion or RM4 billion in your personal bank accounts. But it is now corruption even when the alleged corrupt party did not gain any benefit.

I will not submit to such dirty and vicious political plays to destroy my reputation or Penang’s image as the cleanest and best-run state in Malaysia.

We are proud of our open competitive tenders and proud of our accolades from Transparency International and the annual Auditor-General’s Reports.

We will not allow BN to throw mud to hide its own corruption scandals. We will prove our innocence in court.

We will fight to prove that the Pakatan Harapan government is a people-centric government that upholds its principles of integrity, justice, freedom and democracy.

There is still hope for a Malaysia that is clean and free from corruption, abuse of power and oppression. We must not allow BN to steal our children’s future as they have stolen ours.

What type of country do we want our children to grow up when those who gained benefits and donations amounting to billions of ringgit are not charged with corruption while those who gained no benefit are prosecuted for corruption?

BN can prosecute me but it will not kill my passion to free Malaysia from corruption.

BN can victimise me but will not crush my spirit to free Malaysia from those who steal our children's future.

BN can even humiliate me by unnecessarily detaining me overnight but will not succeed in changing white to black and black to white. Right cannot become wrong and wrong cannot become right.

BN will not break my party's unity – we stand together as leaders and members to battle for reforms towards a better Malaysia with freedom, justice and democracy.

If BN feels that they can bend or break me by arresting me, they are wrong! I will die standing (rather) than live on bended knees. A free Malaysia, a fair Malaysia, a prosperous Malaysia for all is worth fighting for!