Budget airline AirAsia Group chief Tony Fernandes has urged the government to build a proper low-cost carrier terminal if it insists that KL International Airport 2 (KLIA2) is not such a terminal.

Fernandes said KLIA2 in its present state is akin to a ‘Frankenstein terminal’ that is ‘neither premium nor low-cost’.

He said this in response to Malaysia Airports Holdings Bhd (MAHB) managing director Badlisham Ghazali's statement that KLIA2 is not a low-cost terminal.

“I'm not sure whether to cry or laugh when I read this article from MAHB. 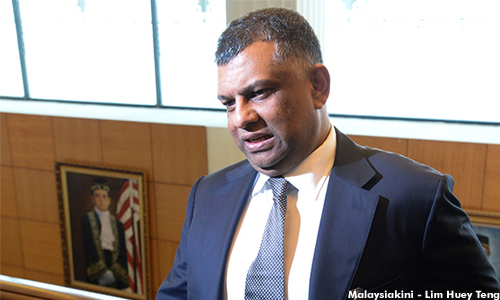 “Yes, our terminal was not a low-cost terminal while it was supposed to be. A Frankenstein terminal was built, neither premium or low cost, where the problems are huge,” Fernandes said in a Facebook post yesterday.

He said AirAsia makes up 98 percent of the passenger traffic at KLIA2, and the other airlines operating there are also low-cost carriers.

“If you don't want to call it ‘low-cost’, then build a proper one so we can create more jobs,” he said.

His posting comes amid a dispute between AirAsia and MAHB.

AirAsia wants to promote KLIA2 as a low-cost carrier hub for the Asia region and it sank US$5 million (RM20 million) into the marketing campaign, while MAHB balked at the idea of having KLIA2 rebranded as Low-Cost Carrier Terminal 2 (LCCT2).

However, after a meeting with AirAsia, MAHB and the Transport Ministry, its minister Liow Tiong Lai said the KLIA2 name will stay, but he also supported the proposal of KLIA2 being used as a low-cost carrier hub.

'It is not a low-cost terminal'

In an interview pubished in this week's edition of The Edge, Badlisham said he did not mind KLIA2 being promoted as a destination for low-cost travel, but insisted that it was not a low-cost terminal.

“If AirAsia wants to rebrand KLIA2 such that when people mention KLIA2, they think of low-cost travel and AirAsia (being the largest tenant there), that’s okay with me. As it is, our aeronautical charges are among the lowest in the region.

“The passenger service charge (PSC) at the Kuala Lumpur International Airport (KLIA1) is lower than those at most other major airports in Asia. So, should I also call KLIA (a) low-cost travel (airport) and KLIA2 (a) lowest-cost travel (terminal)?

“But one thing is for sure - it is not a low-cost terminal,” Badlisham was quoted as saying.

According to the financial weekly, passengers departing Malaysia’s international airports pay a PSC of RM65 for international flights and RM9 for domestic flights.

At KLIA2, the fee is RM32 and RM6 respectively. The average for major Asian airports, not including KLIA1, is RM78.34 per passenger.

Badlisham was also quoted saying that he wanted the gap between the PSC of KLIA2 and other airports closed. He said MAHB had invested RM4 billion in KLIA2, but there had been no corresponding increase in PSC.

Responding to this, Fernandes said raising the fees would stymie his plan of turning Kuala Lumpur and Negri Sembilan into huge tourist attractions.

“And why did you build a RM4 billion airport? Our plans to build a new airport at Labu cost RM2 billion. And we projected only RM1 billion for the new LCCT at KLIA.

“You can't charge passengers for your grandiose schemes,” Fernandes said.