The second finance minister's claim that July's fuel prices were lower than what it should be is an admission that the government does not follow its market price formula, said an MP. 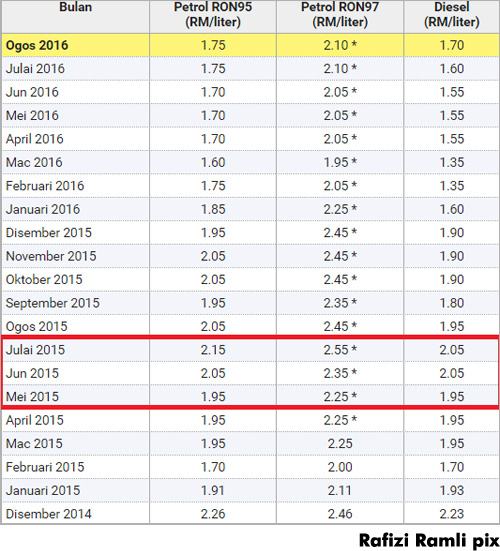 "From the report, we can conclude that the finance minister II admits that previously, the federal government has strayed from its formula to determine the price of fuel for June and July 2016.

"He said by right the July 2016 price should have gone up by 10 to 15 sen, but the federal government only raised the prices by five sen.

"That is an open admission that it has indeed been a practice of the federal government to not follow its formula for determining prices, when it tells the public that it determines the prices according to market average," said Rafizi in a statement today.

In the Awani report, Johari while claiming the government used a formula, then explained that "although crude oil prices on the market were quite high in June and July, the government did not raise the retail oil prices for the two months out of concern and consideration for the people".

"As an example, in June there was no price increase, but for July the petrol price should have been raised [...]," Awani quoted the minister s saying.

On Wednesday, Rafizi called on the government to reveal the daily oil price and conversion rates used to determine fuel pump prices, to prove there are no hidden taxes.

The Pandan MP has repeatedly argued the government is in fact taxing the consumer indirectly when its pump prices are actually higher than the market price.

Rafizi added that manipulating the pump prices not only allows the government to reap huge profits, but is also made for "political gain".

He cited how June 2016 prices did not follow the market rate, arguing it was kept low in view of the twin by-elections in Sungai Besar and Kuala Kangsar that were taking place then.

However, just two weeks after the by-elections, the prices were raised, he said, a move that would surely anger voters had it been announced before the polls.

"Johari's (inadvertent) admission that the fuel prices are determined according to the whims of the Najib administration, according to political needs, means the risk of the people paying hidden taxes is great," said Rafizi.

He said this would lead to the people being "victimised" as they ended up paying taxes to the government without knowing it.

Rafizi therefore repeated his call to Johari to publicise the market rates and relevant exchange rates weekly so that the people can see how the prices are being determined by the government formula.

Failing which, he said, he would publish his own list.

"Instead of the public getting their data from me, it would be far better if the federal government publishes the prices," he said.