Najib had claimed the US$681 million which he received in March 2013, widely referred to as the RM2.6 billion based on the exchange rate when it was first publicised in July last year, was a donation from a member of the Arab royal family.

Muhyiddin said he learnt about the deposits prior to the purported 'Arab donation' from then-attorney-general Abdul Gani Patail, who had shared the information with him.

"The former attorney-general did mention - before he suffered the same fate as me by being sacked - there was already almost RM1 billion in Najib's account before that (RM2.6 billion controversy).

"So in total, it was around RM4 billion in the prime minister's account. Can you believe it?" he told a ceramah in Ketereh, Kelantan yesterday.

A video recording of the ceramah was uploaded on Gerakan Harapan Baru TV and KiniTV.

Muhyiddin said he almost passed out after he looked at the figures in Najib's personal bank account.

"The attorney-general at that time... he showed me - I almost fainted looking at that much money in Najib's account.

"I felt like fainting but luckily I didn't," he said.

Muhyiddin's claim appear to corroborate a report by Australia-based ABC News in March which put the peak figure in Najib's bank account at US$1.051 billion (RM4.202 billion) based on bank statements.

According to the report, prior to RM2.6 billion deposit from Tanore Finance, Najib also received US$120 million from Blackstone Asia Real Estate Partner Ltd (BVI), US$80 million from Saudi Arabia's Ministry of Finance and US$75 million from Prince Faisal bin Turkey bin Bandar Alsaud. 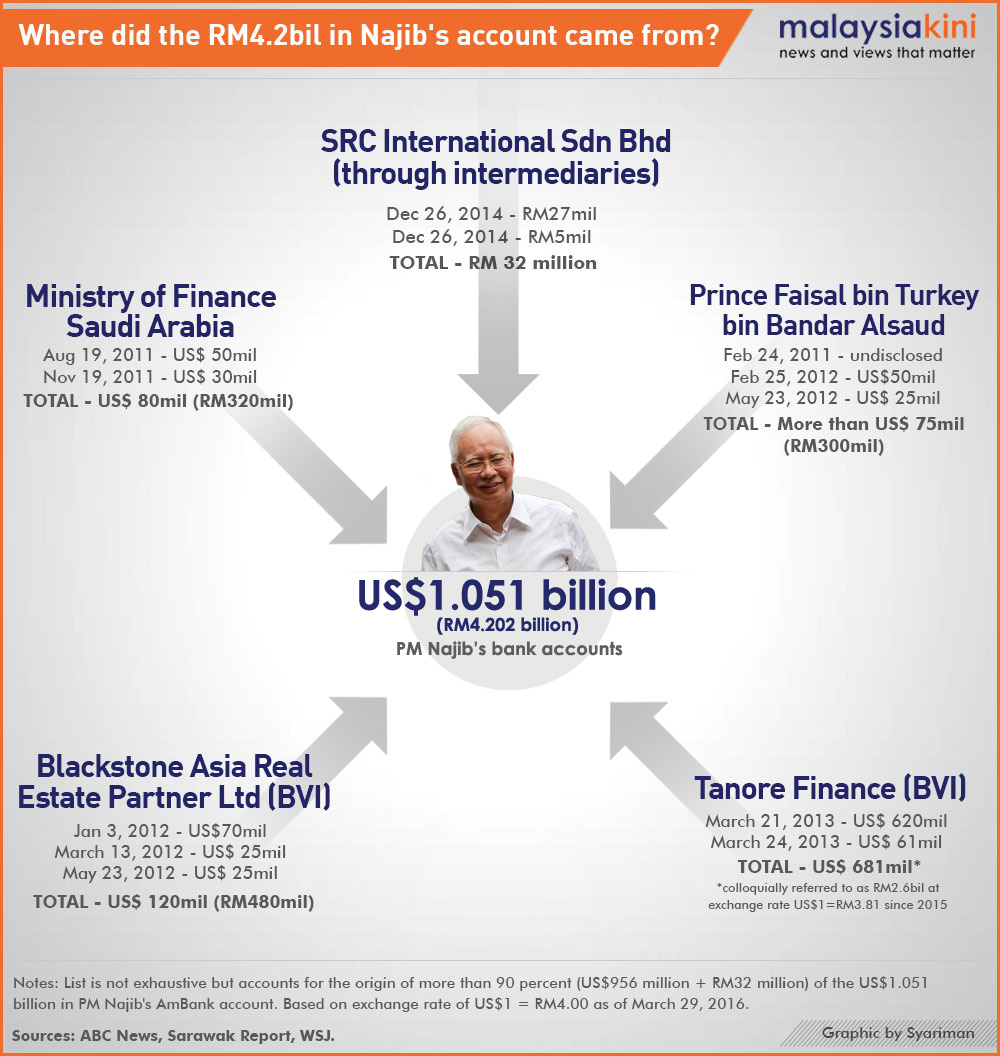 The US Department of Justice (DOJ) also highlighted deposits not mentioned or disclosed in the ABC News report, including an additional US$10 million on Feb 23, 2011 and another US$10 million on June 13, 2011 from Prince Turki Abdullah Al Saud, referred to as "PetroSaudi co-founder".

The DOJ, which claimed more than US$3.5 billion was allegedly misappropriated from 1MDB, largely focused on the money trail that passed through the US financial system.

Najib had denied wrongdoing and said he had never taken public funds for personal gain.

Muhyiddin was removed as deputy prime minister in July last year, the same month when the RM2.6 billion deposit came to light.

Muhyiddin claimed he was removed after confronting Najib about the deposits.

His sacking coincided with the removal of then-attorney-general Abdul Gani Patail.

Malaysiakini has sent a query to the Prime Minister's Office over the matter.