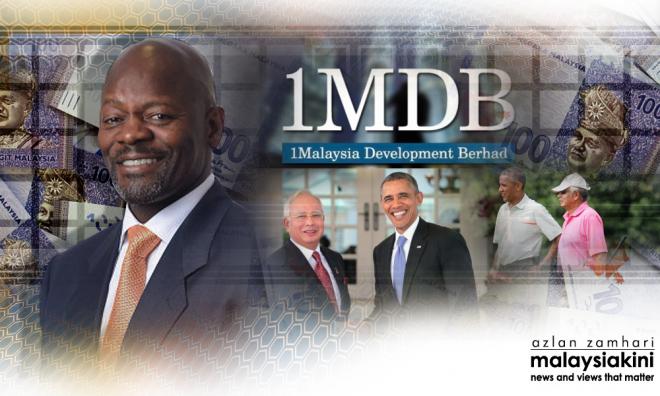 Investigators believe that some of the money allegedly from troubled state fund 1MDB had gone to a US entrepreneur, who had later arranged a White House visit for relatives of Prime Minister Najib Abdul Razak.

According to The Wall Street Journal (WSJ), the entrepreneur is Frank White Jr, one of the founders of investment firm DuSable Capital Management LLC, who has also raised funds for US President Barack Obama and presidential candidate Hillary Clinton.

The US financial daily reported today that according to people familiar with the probe, investigators are looking into this as they believe about US$10 million allegedly misappropriated from 1MDB had flowed indirectly to White in a business deal.

1MDB had also paid US$69 million to buy a DuSable unit out of a deal they had agreed on to build solar power plants, said WSJ.

"White and DuSable have provided information to investigators, said a person familiar with their position.

"The investigation hasn't resulted in any allegations of wrongdoing against White or DuSable," WSJ reported today.

Erik Smith, a spokesperson for White and DuSable, said they were not aware of any allegations that 1MDB was the "victim of theft" when they had dealings with the state fund.

1MDB and DuSable cooperated on a solar-power project, which controversial businessman Jho Low had helped come up with, WSJ reported people familiar with the matter as saying.

"They said Low told others his efforts in arranging it helped Najib get closer to Obama, who golfed with the prime minister in Hawaii at Christmas time in 2014," reported WSJ.

Malaysiakini has contacted 1MDB and the Prime Minister’s Office (PMO) for a response.

WSJ said the PMO declined to comment on the power project and that Low did not respond to requests for comments.

According to people familiar with the payment, in 2012, White was allegedly paid US$10 million by MB Consulting LLC, a company owned by an Abu Dhabi business partner of Low.

In a civil suit filed by the US Department of Justice (DOJ) seeking to seize US$1 billion of assets believed to be purchased with money allegedly stolen from 1MDB, US prosecutors had claimed that part of the money was sent to MB Consulting, without saying where it went next.

White, whose sister is married to a cousin of US First Lady Michelle Obama, was described as a “prominent supporter of the president” by Deputy White House press secretary Eric Schultz, WSJ reported.

White had arranged a White House visit in December 2013 for a delegation that included the son and stepson of Najib, according to visitor records.

Actor Leonardo DiCaprio and director Martin Scorsese also accompanied them to present Obama a copy of “The Wolf of Wall Street”, a film which Najib’s stepson Riza Aziz co-produced, the US daily said.

DiCaprio had declined to comment while Scorsese did not respond to requests for comments, it added.

“There is no indication Obama or the White House were aware of any 1MDB links with White, or of any issue with the movie’s financing,” WSJ said.

The DOJ had also claimed that the film was partly funded by 1MDB money.

Schultz had stressed that US-Malaysia policy has been driven by what is best for the US and not by outside influences.

He also said that Obama has privately discussed with Najib “the importance of transparency, accountability, and rooting out corruption”.

White is supporter of Hillary Clinton

White is also a supporter of presidential hopeful Hillary Clinton, as WSJ reported that he is listed on Clinton’s website as a “Hillblazer” who contributed or raised at least US$100,000.

The website also said that he has donated between US$1 million and US$5 million to the Bill, Hillary and Chelsea Clinton Foundation.

A campaign official told WSJ that White has hosted events for Hillary, but that is the extent of their relationship.

The government has long sought to deepen its ties with the US as a moderate Muslim country, with Obama making the first visit to Malaysia by a US president in over 50 years in 2014.

In May 2013, White formed DuSable Capital with Shomik Dutta, a former White House special assistant and 2012 Obama fundraiser and with Pras Michel, an original member of the hip-hop group the Fugees.

WSJ said Dutta and Michel had declined to comment.

White registered DuSable in 2013 as a lobbyist for 1MDB, calling itself an investment firm focused on renewable energy and infrastructure.

The filing said DuSable would “encourage the US government to provide non-financial support” for a solar project in Malaysia, said the news daily.

In December of the same year, White escorted Najib’s family members on their White House visit, where they met Obama.

A DuSable unit agreed with 1MDB to jointly develop the solar-power project in April 2014, and the deal was done without a public tender, according to 1MDB board minutes reviewed by WSJ.

“The minutes say 1MDB executives presented it to the 1MDB board as a 'government-to-government' deal between Malaysia and the US. Mr White’s spokesman said the US government wasn’t a party to the deal,” WSJ said.

Malaysiakini could not independently verify the claims made in the WSJ report.

Four months later, 1MDB bought the DuSable unit out of the solar-power project, which had seen no construction, to prepare 1MDB’s energy assets for a public offering.

Najib had signed a resolution to pay DuSable US$95 million for its interest in the solar project, but according to a 1MDB/DuSable joint statement last year, the price was renegotiated and 1MDB paid US$69 million.

This investigation on the payments to White is part of the wider probe into 1MDB, Najib’s brainchild that was set up in 2009.

Investigators believe that up to US$6 billion might have been improperly diverted from 1MDB.

Najib and 1MDB have both consistently denied any wrongdoing in the matter and have pledged to cooperate with investigators.