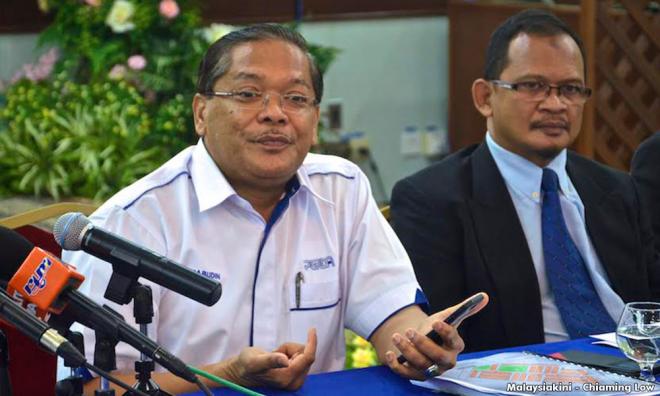 FACT CHECK | Tasek Gelugor MP Shabudin Yahaya is mulling legal action against the media over reports on his remarks about child marriage and rape, which he claims were spun out of context.

Malaysiakini scrutinises media reports and the Parliament Hansard to get a better picture of who is spinning.

The backlash against Shabudin came after he was reported as saying that marriage between a rapist and his victim could serve as a remedy for social problems.

He had also reportedly said that girls who reached puberty as young as 12 years old were "physically and spiritually" ready for marriage.

The Umno lawmaker's remarks were mainly published by the English-language media.

Shabudin has since claimed that he was discussing cases of consensual sex with girls under the age of 16, which the law classifies as statutory rape.

He maintained that statutory rape is still a crime, but that there was no law preventing the girl from marrying the man (who raped her).

What the media reported:

Paragraphs 1-3: Marriage between a rape victim and the rapist was a possible remedy for social problems, a BN lawmaker told the Dewan Rakyat today.

Shabudin Yahya (BN-Tasek Gelugor) said while rape was a crime, the law does not prevent a rape victim from marrying the attacker.

He said marriage may even lead to the rapist repenting and it would be good for the victim to have a husband.

Paragraph 9: Shabudin said that the marriage of Muslim girls under the age of 16 required the permission of the Syariah Court.

Paragraph 1: There is nothing wrong with a rape victim marrying the rapist, according to a Barisan Nasional lawmaker who even suggested that some nine-year-olds were “physically and spiritually” ready for marriage.

Paragraph 5: “So it's not impossible for them to get married,” Shabudin said, adding there was “nothing wrong” with a rape victim marrying the rapist as it could serve as a “remedy” to the increasing number of social problems.

Paragraph 7: He said that although rape is a criminal offence, the rapist and the victim should be “given a second chance to turn a new leaf in life".

Paragraph 1-2: The future of rape victims is “not bleak” if they are married to their rapists, Umno’s Tasek Gelugor MP Shabudin Yahya said today.

Speaking in the Dewan Rakyat while debating the Child Sexual Offences Bill, Shabudin said that marriage between a victim and her rapist can in fact help solve social problems.

Shabudin's remarks according to the Parliament Hansard:

Page 82, Paragraph 6-7: Shabudin: On issues of sexual crime, when there is illicit sex with a girl under the age of 16, that can be classified as rape. Thus, even in Islam, there is no exception.

Thus if there is any law that can punish someone for rape, that law must be carried out. But at the same time, it does not become an obstacle if the couple decides or agrees to be wed, because it is not wrong for a girl under the age of 16 to marry someone who raped her. In terms of marriage laws, there is no offence. What offence occured is that the rapist raped a girl under the age of 16.

Page 85, Paragraph 5-7: Pasir Puteh MP Nik Mazian Nik Mohamad: Tasek Gelugor, Just now, was it rape or 'zina' (illicit sex). If zina, it is consensual. They agree to it, but rape is forced. That is a major crime.

Shabudin: Correct. Ok, I accept. Whether he committed zina or he committed rape, what is most important is that he goes through a process of realisation. A process of repenting. Those who commit 'zina', or rape, the offence is still a criminal offence. But they have a chance. Maybe with the marriage, they can go through a better life that is healthier and better. And the wife who was raped, maybe if she can get married she won't have to go through a bleak future.

At least she has a husband, someone can be her husband at the point of time. This is a remedy to social problems that occur in our society.

Shabudin has since said that Muslim girls below 16 can get married if they get permission from the syariah courts.

He also claimed that his remarks about girls as young as nine years old being ready for marriage was taken out of context, as the girls must have reached puberty first.

What the media reported:

Paragraph 9: Shabudin said the marriage of Muslim girls under the age of 16 required the permission of the Syariah Court.

"When we discuss 12- and 15-year-olds, we don't see their physical bodies, because some children aged 12 or 15, their bodies are like an 18-year-old woman.

"So it's not impossible for them to get married," Shabudin said.

He added that girls who reached puberty as young as nine were physically and spiritually ready for marriage.

“When we discuss 12- and 15-year-olds, we don't see their physical bodies because some children aged 12 or 15, their bodies are like 18-year-old women," Shabudin told the Dewan Rakyat on Tuesday.

The former Syariah court judge added that some girls who reached puberty when they were as young as nine-years-old were “physically and spiritually” ready for marriage.

“So it's not impossible for them to get married,” Shabudin said, adding that there was “nothing wrong” with a rape victim marrying the rapist as it could serve as a “remedy” to the increasing number of social problems.

Paragraph 9-11: He also said that physically and spiritually it is not a problem to marry off girls aged between nine and 12-years-old.

“They reach puberty at the age of nine, or 12. And at that time, the physical state of their body is already akin to them being 18-years-old,” he said.

“So physically and spiritually, it is not a barrier for the girl to marry,” he added

Shabudin's remarks according to the Parliament Hansard:

Page 82, Paragraph 1: Shabudin: .... there is a provision or clause in section 18 which provides that in certain cases, girls under the age of 16, when marriage is necessary, must first get permission from the syariah courts.

Page 84, Paragraph 8-9: Shabudin: Here we have to take note that it is not a problem when we say that those aged under 16, we say that those children are not mature. A girl, their maturity arrives when they reach the age of puberty, the age of nine they have become mature and usually sometimes there is a case. Like just now, when we talk about 12-year-olds, or 15-year-olds, we have not seen their physical bodies yet. Because there are children aged 12 or 15 even, their bodies appear to show as though they are girls who are 18-years-old.

So in this matter, it is not impossible that they get married and they have reached puberty at the age of nine, 12, in the condition that maybe their bodies are like 18-year-olds meaning that physically and spiritually, it does not become an obstacle for them to get married.

This Fact Check was done by ZIKRI KAMARULZAMAN