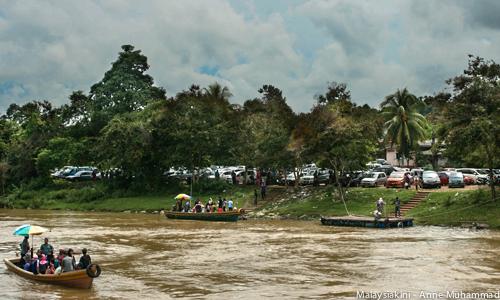 M'sian suspected of links with IS left Thailand on April 21

Thai authorities have confirmed that a Malaysian man who was linked to the Islamic State (IS) terrorist group left the country on April 21.

"Our recent record showed he left Thailand legally through the Sungai Golok immigration checkpoint on April 21. We also have the record when he entered Thailand," Thawip told the media in Bangkok today but declined to elaborate.

Thailand would conduct a search for the wanted man if its Malaysian counterpart shared information regarding his alleged involvement with the terrorist group, said the NSC chief.

His statement was in response to an announcement by Malaysia's inspector-general of police (IGP) Khalid Abu Bakar two days ago on the arrest of six individuals for suspected links with the IS terrorist group.

Thawip also stressed that there was no evidence on the existence of an IS cell in the country but promised the authorities would continue monitoring the group and exchange intelligence information with other countries.

A regular traveller into southern Thailand

"We need to exchange information with other countries and monitor the travelling activities of returning IS members," he said.

A security source in southern Thailand told Bernama that the Kelantanese was a regular traveller into southern Thailand with immigration records showing he entered the border provinces at least nine times recently.

On allegations of arms smuggling from southern Thailand into Malaysia by people suspected of having links with IS, he said Thailand needed more information from its neighbour.

"Information which we obtained now showed it only involved a few weapons," he said, adding that Malaysia and Thailand needed to increase the frequency of their intelligence exchanges, especially when it involved threats posed by the IS terrorist group and its members.