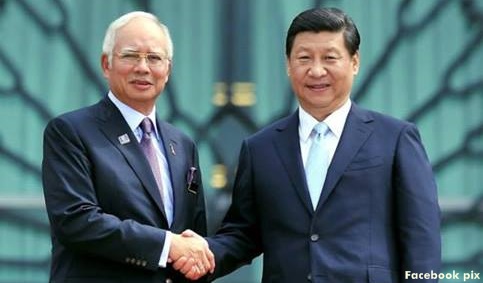 Malaysia-China relations are certainly beginning to look like the relationship between predator and prey; not because of China’s strength but because of our weakness, not because they are better at pursuing their national interests but because we seem to be neglecting our own.

The lure of PRC money

Our culture of corruption and political chicanery has finally caught up with us.

The lure of PRC (People's Republic of China) money and political support has proven too irresistible. We are trading away our sovereignty, one asset at a time, while massively indebting our nation with projects of dubious value.

They keep calling it “investment” but it is mostly PRC government loans, the kind that is extended to clients and cronies to build projects that serve PRC interests with PRC management, PRC technology, PRC products and PRC labour.

A few on both sides will, of course, reap unimaginable profits; while generations of Malaysians will struggle to pay it back. It might be win-win for some but it’s grand larceny for Malaysian taxpayers. It’s a get-rich scheme perpetrated on a national scale.

Fortunately, the nation is waking up to the duplicity that is being foisted upon us. More and more questions are being asked and answers demanded, as it should be.

In their greed to sign off on as many projects as possible while they still can, they might have awoken the ire of a nation long accustomed to corruption, malfeasance and being taken for granted.

Has it come too late? Only time will tell.

In the meantime, the sell-out of national interests, national assets and national sovereignty continues unabated. A high-powered 35-member delegation from China is currently in town hoping to finalise a string of deals in preparation for the visit of President Xi Jinping later this year.

Perhaps they also see the writings on the wall, the rising disquiet of the people, and want to put in concrete as much as possible before the people decide that enough is enough.

Reports suggest that China is exerting pressure (not that it is needed) to secure major contracts and deals that will benefit China but impoverish Malaysia for years to come. Included in the list are the construction of three new ports - the Malacca Gateway port (RM43 billion), Carey Island port (RM200 billion) and the Bagan Datoh port (RM30 billion). The Bagan Datoh port, which was only mooted a few months ago, also includes the construction of a RM30 billion pipeline that will cut across the Peninsular to another new port terminal in Bachok, Kelantan.

Thus far we have seen no feasibility studies, cost-benefit analysis or other data to justify any of these megaprojects.

And this comes on the heels of the RM12.8 billion Kuala Linggi International Port (which will service the oil and gas industry) and the RM6.3 billion Penang Port expansion project, both of which also involve China.

The Kuala Linggi port project was approved despite serious environmental reservations; such is the power of the China lobby.

No other country would contemplate building so many new and expensive ports at the same time, all in close proximity to one another, along a short stretch of coastline that already has more than sufficient port capacity.

How many mega-ports does a small country like ours need? What are China’s longer-term plans for these ports along the strategic Malacca Straits? Will we end up having to lease these ports to China for 99 years as in the days when colonial powers owned concessions and enclaves along China’s coast?

As for the Bagan Datoh-Bachok pipeline, although it is being touted as serving the “mutual security interests” of both countries, it looks geared to ensuring China’s energy security more than anything else.

China has built similar pipelines across Myanmar to Kunming, across Pakistan to Kashgar, and is also discussing with Thai authorities a pipeline across the Kra Isthmus for similar strategic reasons.

It’s one thing if China is paying for all these projects but does it make sense for Malaysia to borrow from China to build projects that would enhance China’s energy security and advance China’s interests in the region?

Are we now to pay for our own subjugation?

The fact that the high-powered Chinese delegation that is currently in town to finalise all these projects is being led by China’s public security minister indicates that these projects are being driven by political rather than purely economic goals, but that appears to be lost on our policy makers in their eagerness for more and more PRC-financed projects.

And if that’s not enough, the Finance Ministry secretary-general will soon be heading to Beijing to plead for yet more PRC money for the RM160 billion (gross development value) Bandar Malaysia project and who knows what else.

Watchmen on the walls

In light of the apparent abdication of responsibility by those charged with protecting the public interest, it falls to the public to become watchmen on the walls, to monitor all publicly-funded projects, to ask questions and demand answers, and to vote accordingly at the next general election.

It is also incumbent on our academic institutions and think-tanks, our economists and financial experts, our foreign policy specialists and the independent media to get involved to a much greater extent than they have thus far in reviewing, analysing and assessing the many aspects of our relations with China.

They owe it to their country, at this critical juncture in its history, to speak truth to power and help citizens make informed judgments about what is going on.

China has undoubtedly a great deal to offer Malaysia and will always figure prominently in all our economic plans; it is, after all, our largest, most important economic partner. Common sense, however, dictates that when dealing with such a behemoth, it is always better to err on the side of caution, particularly when so many vultures are looking to feast at the expense of the nation.

To ensure that our nation’s interests are safeguarded, the public must insist on minimum governance standards for all publicly-funded projects. This includes full transparency, maximum local and minimum foreign participation at all levels of the project, priority for local procurement of equipment and raw materials, and local control and management.

Any project that does not meet the transparency smell test must automatically be deemed suspect and against the best interests of our nation. Any political party or politician that endorses or participates in dubious projects should be deemed to have failed the nation and be denied our vote.

And that also goes for the DAP-run Penang state government which is now reportedly looking to finance projects with PRC loans.

And finally, we must oppose China’s increasing participation in our domestic politics. China’s political involvement and the slush funds that are often derived from megaprojects distort our electoral process and further diminish our already fraying democracy.

Again, any political party or politician that seeks the support of a foreign government to win political office should be deemed to have betrayed their commitment to the nation and should not be supported.

The price of neglect

In the course of writing this four-part series, I have received much feedback from many Malaysians. Some have viewed it as anti-China, even anti-Chinese, while others saw it as anti-government. Still others responded on the basis of ethnic perspectives, seeing the whole issue in the context of the Malay-Chinese divide that sadly exists in our country.

Those are the games that the puppet masters want us to play while they carry out their schemes unhindered.

However, what is necessary for our nation’s survival is for each one of us to carefully consider what is going on in our nation today - the increased borrowing for dubious projects which taxpayers will have to pay for, the massive potential for corruption, the growing control and influence that is being ceded to China - and demand answers as well as transparency and accountability.

Careful scrutiny of important issues cannot hurt; neglect might just cost us our independence and our freedom. And as for dancing with dragons, forget it; it will be a long time before we are ready for that.

Part 1: Pathway to prosperity or slippery slope to subjugation?

Part 2: New Silk Road: Is there a China plan for M’sia?

Part 3: Demons within, dragons without

DENNIS IGNATIUS, a former Malaysian ambassador, firmly believes that we should put our trust not in the leadership of politicians but in the sanctity of great institutions - our secular and democratic constitution, a democratically-elected parliament, an independent judiciary, a free press and a government fully accountable to the people. He blogs here.