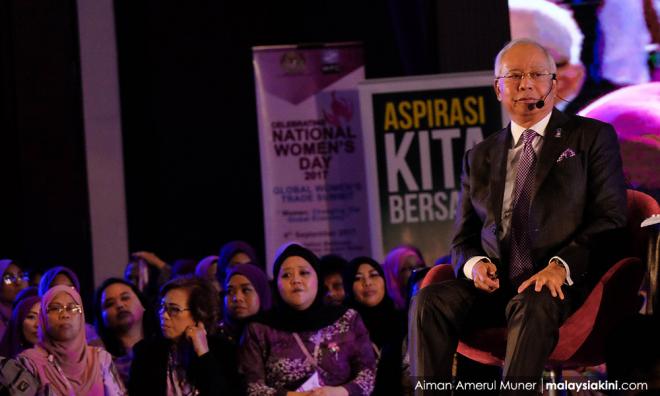 YOURSAY | ‘Didn’t you promise to repeal the Sedition Act some time ago?’

Give us two-thirds to end unilateral conversion, Najib tells women

Commentable: PM Najib Razak, why do you need a two-thirds majority in Parliament to turn the proposed Section 88A into law and end unilateral child conversion?

It's just a simple amendment to the existing Law Reform (Marriage and Divorce) Act (LRA). Even assuming the two-thirds majority is required, I'm sure many in the opposition bloc will gladly lend a hand.

Stop treating our women like naive little girls. You look like the nasty wolf trying to deceive Red Riding Hood. I dread to think what evil laws will be put in place once you have the desired two-thirds majority in your hands.

Malaysian women, I hope you know what to do with wolves like him.

Léon Moch: This is the most illogical line of reasoning ever. BN has 133 seats out of 222 seats in the Parliament. That is more than enough to pass section 88A as it is an ordinary legislation.

Even if he needed two-thirds to pass the amendments, BN needs only another 15 votes to achieve that. DAP alone has 38 members, most, if not all of whom support the insertion of section 88A.

Either way, BN is the one refusing to insert section 88A. So getting two-thirds or even all of the seats in the Parliament will not help in this case.

Not Convinced: Najib, didn’t you promise to repeal the Sedition Act some time ago?

Just before GE13, you announced that you would repeal the Act because it "represents a bygone era." You said this was part of your reforms to develop Malaysia into a progressive democracy.

That was in July 2012. But instead of your promised repeal, scores of political dissidents were arrested under the Act.

P Dev Anand Pillai: How on earth is this administration going to do that (end unilateral conversion), when it didn't do it when it had the chance?

The mullahs and the clergy will never allow such an amendment, we should already know that and this administration has no guts to go against them.

The only way to change the course of this nation for the betterment of all is to continuously deny the BN a two-thirds majority.

Vision2020: Indeed, Malaysian Official 1 (MO1) missed the opportunity to show his leadership during the recent parliamentary session to legislate the LRA Act when he chickened out in order not to offend his PAS buddies.

The voters today are cleverer than MO1, and they do remember his empty promises such as the Hindraf case.

Kubang: The fact that you even consider amending Section 88A is a tacit admission that the government knows that the Act is flawed.

With Umno inching towards and going out of its way to woo PAS, this proposal is a non-starter. We shall call your bluff.

SusahKes: Dear MO1, surely you, of all people, are acutely aware that Malaysia is in this mess in the first place chiefly because BN had two-thirds majority in the past. Indeed, what "wonderful" legacies the coalition has bequeathed to us, courtesy of this two-thirds advantage.

If it wasn't for the practically unbridled domination which this power source provided to the Umno/BN cadre, and one which was used unabashedly by the ruling party, we would have had better checks and balances in the system.

For sure, we wouldn't have had to put up with the shenanigans of 1MDB, among others. No sir, BN doesn't deserve to be allowed the benevolence of the people in letting the coalition have the benefit of near-unmitigated power anymore.

Rupert16: If voters give Umno/BN two-thirds majority in GE14, chances are that they will work hands in gloves with PAS to change the constitution to an Islamic one – so that they can stay in power, if anything.

If Najib is seriously concerned about unilateral conversion, he should have tabled Section 88A, and we have no doubt the opposition, minus PAS, would have supported it wholeheartedly.

Wira: Yes, you don't need to amend the constitution to end unilateral conversion. It's an administrative rule. Just change it using your parliamentary majority.

Anyway, this rule was not changed when BN had the two-thirds majority. When MCA and MIC made noise, they were bullied and shouted down by Umno. So what is different now from then? You are still beholden to the same Umno.

Oldtimer: A PM begging for two-thirds majority to do what he should have done in the first place since that is the right thing to do is just disgraceful.

He has the power to right a wrong but didn’t, and now he asks for more power to do it. This is just rubbish.

Clever Voter: Indeed, Najib doesn't need to wait for two-thirds majority to end the unilateral conversion. He needs it for something else.

We are already ashamed of what he and his BN have done. God forbids if he does get his two-thirds. We will all be doomed.

Katusha: There you go again, "You help me, I help you."

Anonymous #03815719: It’s a great insult to all women, and a big disgrace to hold the poor mothers at ransom to gain two-thirds majority in Parliament.

Think what else he is capable of doing to stay in power.

Anonymous 2251681440225523: So unilateral conversation is this unashamed and unprincipled PM's trump card and a tool to fish for votes by exploiting the suffering of these women.

Your mother should be ashamed of you, Najib. And to all mothers, don't be fooled, again and again.