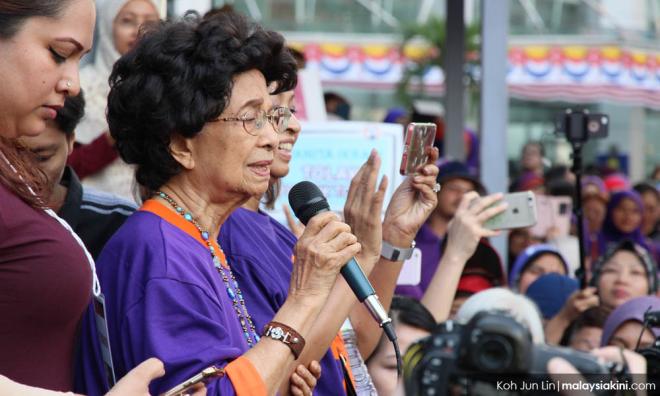 The soft spoken Dr Siti Hasmah Mohd Ali, unlike seasoned activists like Ambiga Sreenevasan and Maria Chin Abdullah, is not someone who is known to rally a crowd at protests.

But this evening, Siti Hasmah, standing before a crowd of some 1,000 people in Kuala Lumpur, many of whom were women and dressed in purple, had a message for them - a message against toxic politics.

Taking the stand as the last speaker before the march to Sogo Shopping Centre, Siti Hasmah impressed upon the crowd on the need to put an end to toxic politics.

Siti Hasmah, 91, said it is worrying, for example, if a person could be slapped for simply voicing an opinion.

“That is why us women strongly oppose toxic politics. Before the toxin enters our body, we better prevent it. Stop it. [...]

“Ladies, let us march,” she said, standing on top of the procession’s lead vehicle, together with other prominent women activists and female politicians.

In May, film producer David Teo was assaulted for asking a question to Prime Minister Najib Abdul Razak, purportedly in a boisterous manner.

The gathering today, dubbed "Women Against Toxic Politics", targeted amongst others, political violence, threats, racism, sexism, hate speech as well as the government's alleged failure to ensure public safety and sanctity of the Federal Constitution, according to the march's promotional material.

Siti Hasmah's 92-year-old husband and former prime minister Dr Mahathir Mohamad was also present but kept to the sidelines except for the crowds seeking him out for photo opportunities.

He followed the procession in a car once the march started.

The group had gathered outside the Maju Junction mall since 4.20pm before marching towards the Sogo Shopping Centre about 400 metres away. They stopped twice along the way for speeches.

A group of at least 30 police personnel were also present to maintain order and direct traffic.

A small drum troupe was present, adding a festive atmosphere to the proceedings and lending more oomph to the demonstrators' songs and chants.

They dispersed peacefully at around 6.30pm, after reading out a three-point declaration stating their stand against toxic politics and any parties condoning them.

Speaking to reporters later, women’s rights group Empower’s former executive director Maria Chin Abdullah said the event was organised by a group of about 30 activists including herself and Marina in their individual capacities.

She accused the government of turning a blind eye to minors being married off as young as 12-years’ old, and to an increasing trend of political violence and repressive laws being used to stifle dissenting voices.

“In this coming election, we have to get rid of candidates who do not believe in upholding integrity, good governance, and democracy,” said Maria, who is best known as the chairperson of the electoral reform group Bersih.