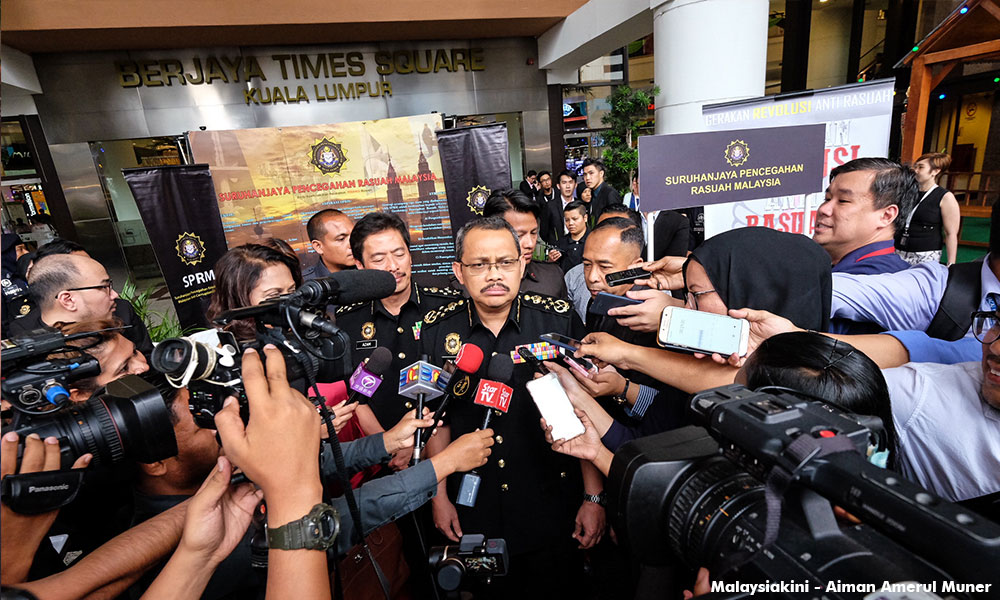 MACC chief, who watches the watchmen?

YOURSAY | ‘The MACC chief, like Caesar’s wife, must be above suspicion.’

Kim Quek: MACC chief Dzulkifli Ahmad is obviously aping his political master who seems to have got away scot-free (so far) despite having been allegedly incriminated in the world’s largest theft of public funds.

Dzulkifli’s virtual admission to committing the offence through this statement, coupled with the woman having owned up to the extramarital affair, have left law enforcers with no alternative but to arrest him for breach of Section 498 of the Penal Code for “enticing or taking away” a married woman.

So, inspector-general of police (IGP) Mohamad Fuzi Harun, what are you waiting for? The heavy burden of upholding the rule of law now rests heavily on your shoulders, for a further relapse in nabbing the nation’s chief graft-buster after the world-renowned failure to bring the prime minister to book on the 1MDB scandal, will precipitate the collapse of public morals and deal a fatal blow to the rule of law in the country.

Vijay47: Dzulkifli, had you been an ordinary man-in-the-street, people may have chosen to view this as one of those mortal indiscretions that occasionally occur, ribbed you a bit about, and moved on. But that is not happening. On the contrary, everybody including me has taken out long knives to take a stab at you.

Your bigger crime is your arrogance where your stand is not of contrition but some mumbo-jumbo about combatting corruption. In your haughtiness, you seem to believe that denial of the allegation is not necessary since you are of a privileged class. Privileged, certainly, but class? Not at all.

That arrogance is also reflected in your pious defence that an attack on you is an attack on MACC. Who do you think you are, Augustus Caesar?

Granted that your friends in Umno have come out to support and defend you, relying on their selective basis of what is condemnable and what is not, adding that these “attacks” are to deter you from carrying out your excellent work. What excellent work?

You are nothing but an Umno tool except that you have refined your act to appear fair and balanced. Need I remind you that as long as you allow allegedly the biggest crook of them all roam free, you will always be seen as the monkey’s paw?

You accused and threatened Penang CM Lim Guan Eng as smearing MACC’s reputation by a comment he made. Using the same yardstick, how would you describe your recent antics? As evidence of MACC’s manly prowess?

I presume the next chapter in the script calls for your cries that Islam is under attack.

It is particularly regrettable that the said accusation should rear its ugly head and if preventive measures had failed to thwart such an occurrence, then stringent and more deterrent measures must be put in place to discourage future sexual gallivanting by the emboldened ones with other people's "marital property".

Anonymous #44199885: Dzulkifli, the campaign has its roots in your alleged actions and is not independently contrived. You have created the scandal that brings into question your morality and values.

Your failure to refute emphatically is reminiscent of MO1 (Malaysian Official 1) after having been caught with RM2.6 billion in his personal account. It is your action that brings disrepute to the MACC, not a third party that exposed the person that you are.

Gerard Lourdesamy: Yes, the alleged affair is your private life but has it not impacted on the image and credibility of the MACC? Have you denied the allegation? The MACC chief, like Caesar’s wife, must be above suspicion.

If one is a public officer holding a public office, it is not acceptable to have extra-marital affairs and be exposed to blackmail and intimidation. It is also about fitness for office. Anwar Ibrahim was removed from office for far less on a mere suspicion before he was charged and prosecuted.

FellowMalaysian: This accusation of Dzulkifli being involved in an extramarital affair with a married woman come at a time when MACC is hot on the heels of their investigation in the RM1.5 billion graft case in Sabah.

The media has been quick to conflate these two unrelated issues together and now barely 15 months into his job as the MACC chief, Dzulkifli has attracted more attention, albeit the notorious kind, than any other of his predecessors.

The police are now investigating but Dzulkifli's reaction is one of nonplussed and has instead placed the blame on malicious and vindictive actions taken by disgruntled parties from Sabah affected by MACC's clampdown out to square against him.

This unexpected event has precipitated PDRM (Royal Malaysian Police) into a twitchy position when its new IGP is still out looking for terra firma to step on.

In a well-run organisation, you will be asked to leave but since your boss himself has similar dishonest and questionable characters, I believe there is no problem for you to stay on until the next general election.

Clever Voter: Such behaviour by any standards is unacceptable. But he is in the inner ring, protected by a government which endorses and practices such unethical acts. There are codes of conduct for public officers, but these are only words if not put into action.

It is obvious that he is not only one who is 'exempted' but we have already double standards being applied elsewhere. How then would you expect the public to respect the office he represents if we have double standards.

Ferdtan: “Who watches the watchmen?” This phrase was found in the work of Roman poet/satirist Juvenal (early 2nd century AD) and said to be in the context of enforcing marital fidelity. Who will guard the guardians whom the husbands have hired to watch their wives while they are away at war?

A person who has immense power, a top man in MACC, not only has to be seen as clean (morally) but must be indisputable morally upright to be able to do his duty honestly without fear of being blackmailed for his sexual impropriety. It was made worse when he was allegedly having an affair with someone’s wife.

The only way for the institution of MACC to salvage its reputation, if any, is to make their boss step down. If not, MACC would be a laughing stock of the whole country.

Warrant Addict: From Malaysiakini, ‘Allah will be my guide, says new MACC chief’.

“Dzulkifli was from the Attorney-General's Chambers and started his new job today, replacing Abu Kassim Mohamed as the MACC number one.

“‘In carrying out this mandate, I am aware and conscious of the word of Allah SWT in the Quran, verse 27, Surah Al-Anfaal, which means – 'O you who believe! be not unfaithful to Allah and His Messenger nor be unfaithful to your trusts while you know.'

“‘This reminder by Allah SWT will perpetually be my light and guidance in performing the heavy task that awaits me,’ Dzulkifli said in a statement.”

Mosquitobrain: An ex-MCA president was caught having a tryst with a woman in a hotel room in Batu Pahat a few years back. He admitted he was the one in the video and later tendered his resignation from the cabinet and the party.

Can Dzulkifli do the same?

Res Ipsa: He has learnt well from his master on the art of putting on a poker face. Both have been caught with their pants down – the master, for alleged mega corruption, and the understudy, for his alleged sexual rendezvous.

It’s just a matter of time before the bluff is called.