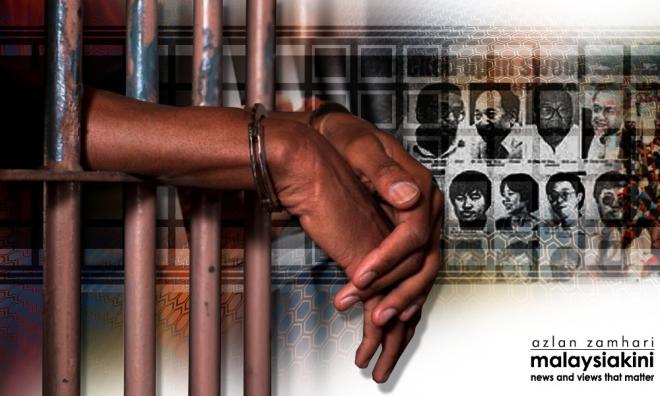 At 18, I was old enough to appreciate Mahathir's autocratic act.

Shell-shocked and in disbelief, I reached for the phone and called Sin Chew's head office in Petaling Jaya. The guy answering my call couldn't tell me what was really going on other than that there would not be any Sin Chew newspapers in circulation the following day and suggested that I wait for further developments.

It was a sleepless night for me. Never a fan of Mahathir and growing angrier at the hawkish rhetoric of Anwar Ibrahim, then education minister who was widely seen as equally responsible for the crackdown, I had vowed never to support Umno/BN for the rest of my life.

Things became worse the next day as the Mahathir regime spread its dragnet far and wide. Soon, I learned that another well respected Chinese educationist, Sim Mok Yu, was also detained. In total, 106 Malaysians of different ethnic backgrounds became the immediate victims of what came to be infamously known as Operasi Lalang.

Sim was already 74 years old at the time; which politician would subject an increasingly frail septuagenarian to arbitrary detention and constant fear, except for one who was heartless and power-hungry?

It was no doubt the nadir of Malaysian politics since May 13, 1969.

Outraged and feeling helpless, few classmates and I paid a visit to the staff at Sin Chew Jit Poh’s office in Jalan Maju Jaya, Johor Bahru and offered our moral support.

One Mr Foo received us and kindly advised us to focus on our studies and leave politics to others.

“The time will come for you to shoulder your responsibility as citizens of Malaysia.” Mr Foo said gently.

The rest is history.

Operasi Lalang indeed marked my political awakening. If more than 100 ordinary citizens who had done nothing more than exercise their civil rights could be detained without trial, what guarantee would there be for me to live in this country with dignity and pride?

Later on, I read from books and articles how the Operasi Lalang detainees and their family members suffered mentally and emotionally - parents, siblings, spouses, children all living in profound fear with no certainty over the future. What a heavy price to pay to speak up for injustices, I thought to myself.

After 30 years, Mahathir finally admitted that Operasi Lalang was meant to win elections, but at whose expense?

When the remnants of Pakatan Rakyat decided to form an alliance with Mahathir more than a year ago, many saw it as a historic opportunity to defeat Umno in the next election, but I was among the very few who actually thought they were going to be beset with a host of challenges and internal feuds.

The reason is simple - Mahathir has too many skeletons in his closet and Harapan leaders just cannot attack Prime Minister Najib Abdul Razak without some of the issues rebounding at them.

For instance, one risks being reminded of the lop-sided deals on Mahathir’s watch when one chastises Najib for toll hikes on highways.

And how can Harapan accuse the judges of being beholden to Najib yet expect the public to not remember how Mahathir sacked six supreme court judges in one go and subjected the judiciary to parliamentary rule?

Which is perhaps why Kluang MP Liew Chin Tong, once critical of Mahathir’s obsession with our national car project, now chooses not so subtly to overlook Mahathir’s role in making Malaysia a car-dependent society with haphazard public transportation systems nationwide.

Lim Kit Siang used to call for Mahathir to own up to Operasi Lalang, and vociferously so, but has since fallen silent. Does he think Malaysians are malleable and stupid to not see it as being opportunistic?

How ironic, that an Operasi Lalang victim like Kua Kia Soong is derided as being ‘naïve’, ‘vengeful’ and 'makan dedak’ whenever he writes of the need for Mahathir to face up to his political sins.

Don’t the detractors know Kua is also the one who untiringly pursued Najib for an answer for the dodgy Scorpene-class submarine deals and the tragic death of Mongolian national Altantuya Shaariibuu?

What is wrong if a former ISA detainee seeks justice from the perpetrator?

Harapan would say the timing is not right because we must all unite and work towards getting rid of Najib.

So when would be the right time for an apology from Mahathir over Operasi Lalang?

Truth be told, every Malaysian has the constitutional right to demand an apology from Mahathir, and when and how this should be done should not be dictated by any partisan considerations. Malaysia does not belong to any political party but to the people.

If a so-called government-in-waiting can procrastinate on the restoration of justice on dubious grounds, how can I not be concerned that there would be myriad of excuses to delay institutional reform upon regime change?

It is truly pathetic that many civil society leaders, mindful of the ‘big picture to save the country’, are now hesitant to endorse the statement that calls for Mahathir’s apology. If we only speak up when it is our material interests that are at stake, how different are we from the powers-that-be?

Perhaps this is why many maintained their elegant silence when Mahathir was clamping down on dissent in a merciless manner. After all, the economy was 'booming' and radical Islam had yet to rear its ugly head.

It does not mean that I hate Mahathir. Far from it.

I merely hold Mahathir responsible for the moral decadence so prevalent in our country today - the haste to get rich and economic growth trumping human rights, to name but two.

Mahathir must, therefore, first repent before we can move on as a nation, following which we would need a real transformation of the country in which we no longer value material achievements more than human rights, for the two are not mutually exclusive to one another as either Mahathir or Najib would have us believe.

True reform cannot come about without the dark legacy of Mahathir being addressed, and a sincere and collective acknowledgement of the injustice of Operasi Lalang is the first step towards national reconciliation and restoration.

Didn’t we often cite the famous quote that “those who cannot remember the past are condemned to repeat it”?

Let’s not prove Mahathir right when he said Melayu, or Malaysians, mudah lupa.

JOSH HONG studied politics at London Metropolitan University and the School of Oriental and African Studies, University of London. A keen watcher of domestic and international politics, he longs for a day when Malaysians will learn and master the art of self-mockery, and enjoy life to the full in spite of politicians.