MALAYSIANS KINI | Ng Seksan is perhaps as well known for his illustrious work in landscape architecture and his string of trendy “Sekeping” guesthouses as he is for his involvement in community-building projects.

Affable and soft-spoken, the 57-year-old was in his element when met recently at the “Kebun-kebun Bangsar” (Bangsar gardens) community garden.

The project, which he helped start with a team of volunteers, is located on a 8.5-acre hill slope in a housing area in the upmarket neighbourhood. The area had previously been vacant as it was positioned under gargantuan electricity pylons.

The garden was merely five weeks old, but was already dotted with purple flowers, mulberry plants, aloe vera, seven large drums of vegetables, and a small but thriving paddy field.

Wooden structures built by architecture students from Taylor’s University for a class project have also been donated to the garden, serving as artistic “sculptures”. 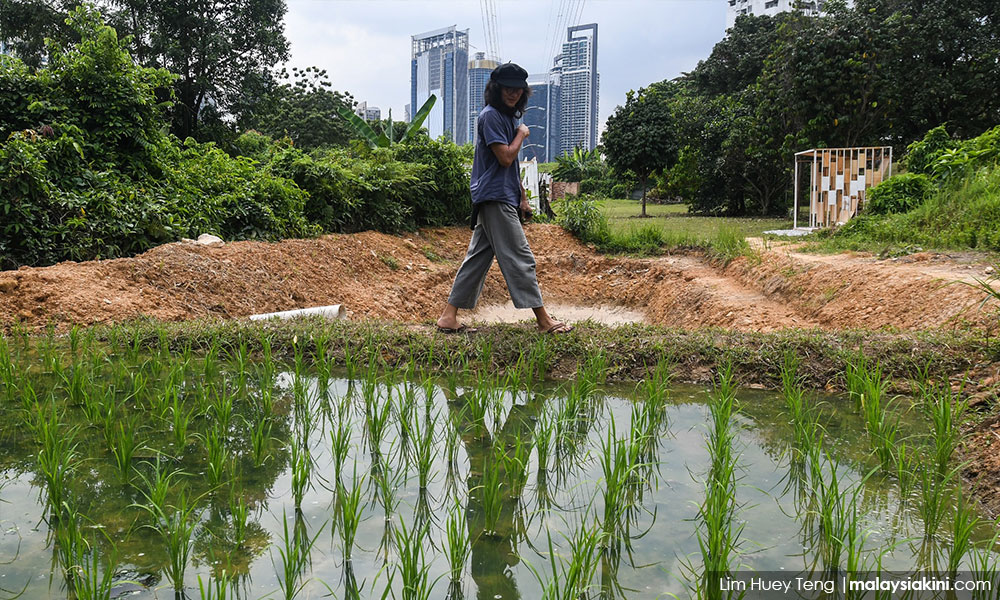 After four years of paperwork and meetings, Ng and his team were finally accorded the swathe of land by Kuala Lumpur City Hall's Local Agenda 21 division (LA21) this year.

Surrounding residents had previously staged protests against the garden, concerned that it would pose risks by endangering the slope’s stability and bringing in outsiders into the neighbourhood.

Ng said many have since warmed up to the project, some even taking part in “gotong-royong” sessions held at the garden every weekend, where members of the public can come and help with weeding, planting and watering plants.

He said it was a “great sense of relief” to finally break ground on a project that had caused him much emotional toil and many sleepless nights over the years.

“We knew when we (eventually) did it, it would be good.

“You see fewer and fewer public spaces for us to run around and meet other people now. As a result, people have become so segregated and self-centred.

“As a social activist, I’m trying to reverse this,” he told Malaysiakini.

Ng’s hunch about the Bangsar gardens came from seeing positive results from previous community projects he had been involved in.

His first community project, as well as his first brush with authorities, was “Malaysian Spring” in 2013. 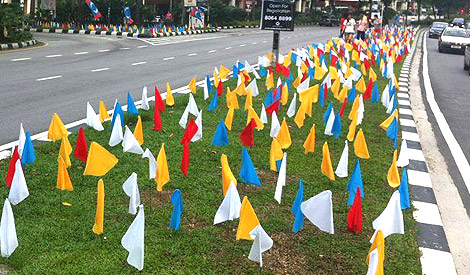 In the initial project, Ng, along with a team of his friends, “planted” some 10,000 flags in PKR colours in a grassland at the centre of a roundabout in Bangsar and uploaded videos online to teach other Malaysians how they could make such flags at home.

It was aimed at increasing the public visibility of PKR’s Nurul Izzah Anwar campaign for the Lembah Pantai parliamentary seat in the general election that year.

“We were totally blown away (by the results), in three weeks more than 300,000 ‘flowers’ were planted in the whole of Malaysia, even overseas.

“The message was to plant hope for a new Malaysia and a new beginning (for the country) thus the ‘spring’ theme.

“It was also to give people a reason to stay in this country, and to say we did not need to depend on politicians (to inspire us), it can come from the people,” he said.

The project was infamously banned by authorities from being re-exhibited at an art festival in the Publika shopping mall.

Next, Ng and some friends embarked on a fundraiser to purchase building materials for an orphanage in Mae Hong Son, Northern Thailand, which he also designed pro bono together with architect Chris Wong.

This endeavour not only saw Malaysians donating large amounts of money, but also villagers in Thailand volunteering to build the orphanage throughout the 15-month construction process, further cementing Ng’s belief in the power of community.

In 2015, Ng helped start an urban garden in Sentul for local charity Dignity Foundation, where he learned many lessons that he later applied when planning the Bangsar garden

They managed to bring together volunteers, including many children, to revitalise the vacant plot by planting vegetables and flowers on it. However, the organisers had not applied for permission from DBKL, who owned the land, and were summoned to then deputy mayor Normah Malik’s office.

"I heard you guys trespassed into my area?” he recalls Normah saying to them...