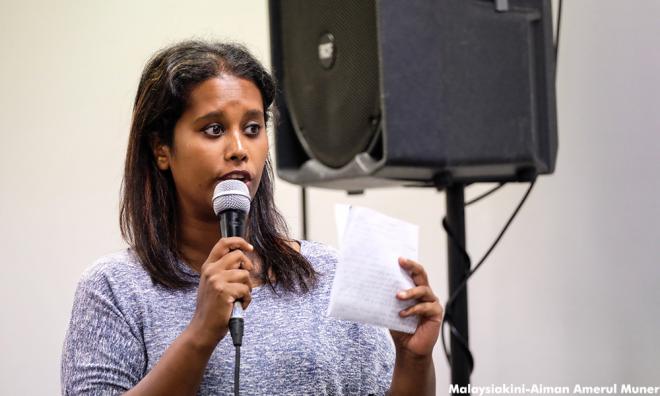 Activist Lena Hendry and the deputy public prosecutor (DPP) have dropped their respective appeals on her conviction for screening a documentary in 2013 without prior approval from the Malaysian Censorship Board.

Hendry was convicted on Feb 21 this year by the Magistrate's Court under Section 6(1)(b) of the Film Censorship Act 2002.

Today, the case was struck out by Justice Mohd Sofian Abdul Razak at the High Court in Kuala Lumpur.

Hendry’s lawyer New Sin Yew said he had sent a letter to the Attorney-General’s Chambers two weeks ago asking to withdraw Hendry’s appeal on condition the prosecution do so as well.

“The prosecution agreed to drop their appeal after studying the whole case.

“This should be the end of it,” he told Malaysiakini.

New had previously filed an appeal to reduce Hendry's sentence and overturn the conviction, while DPP Zalina Awang had appealed for the sentence to be increased in severity.

Hendry, a former programme director for media rights NGO Pusat Komas, later released a statement on the NGO’s Facebook page explaining she had decided to withdraw her appeal in order to focus on “bigger battles”.

She was not present in court today as she is presently pursuing her Masters in the United Kingdom.

“I welcome the DPP’s decision to withdraw the case.

“It has been long drawn (-out battle) and it should not have been brought in the first place.

“I decided to withdraw my appeal as well as I have lost faith in the judiciary and there are bigger battles to be fought outside, without draining my energy in...court proceedings.

“I am currently overseas doing my Masters in human rights and would like to spend more time focusing on that,” she said.

Hendry also criticised the government for “acting in bad faith” in prosecuting her for highlighting a human rights issue. The documentary she was convicted over, titled “No Fire Zone” had been about the Sri Lankan civil war.

“The prosecution of human rights defenders has to stop, and more effort and resource should be put in place for the real criminals out there.

“The fight for arbitrary laws will not stop (because of) this, we will continue to do our work to prevent this law from affecting the lives of Malaysians.

“I would like to thank everyone who has supported me through these past four years,” she added.

On July 3, 2013, Hendry was accused of committing the above-mentioned offence at the Kuala Lumpur and Selangor Chinese Chamber of Commerce Hall (KLSCAH).

At the time, local and international human rights groups had condemned the charge as being allegedly politically motivated and a breach of basic civil liberties.

After Hendry was acquitted on Mar 10, 2016, the prosecution appealed, resulting in her eventual conviction.