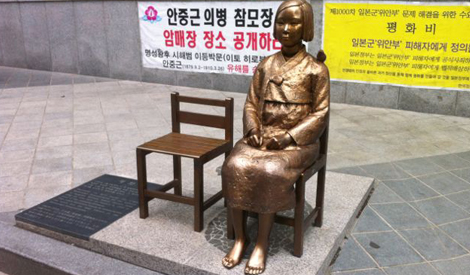 "The steady implementation of this agreement is both countries' duty to the international community," Kono was quoted as telling a press briefing on the matter, following South Korea's announcement of its policy position.

"We cannot accept at all South Korea's demand of further action from Japan despite the fact that, with this 2015 agreement, we affirmed the final and irreversible resolution of the comfort women issue," Kono added.

He went on to say that while Tokyo will "swiftly protest" the new policy through the "appropriate channels" he was confident that South Korea "is aware that this agreement is one of the cornerstones of future-oriented bilateral relations."

Japan's foreign minister said that the government here would like further clarification as to what Seoul means by "matching Japan's contribution."

Seoul has said that it will not seek to renegotiate the deal, but will plan to match the 1 billion yen (US$8.9 million) paid by the Japanese government under the deal, with South Korea's Foreign Minister Kang Kyung Wha saying that it will decide how to use Japan's payoff.