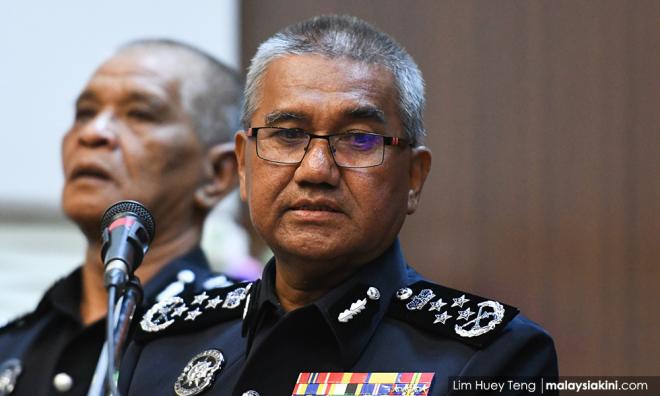 Yoursay: IGP can say what he wants, but DOJ's best is yet to come

YOURSAY | ‘When the top cop can’t connect the dots, we are done for.’

Nothing to link Jho Low with 1MDB, says IGP

Fuzi, do you know how many years the Malaysian police have been probing 1MDB? Three years, since March 2015, when your predecessor, Khalid Abu Bakar, announced the formation of the special task force to probe 1MDB.

Tell us, Fuzi, what is the Malaysian police good for when it can’t even find a trace of relationship between Jho Low and 1MDB after three long years of investigation, while the whole world knows that Jho Low is allegedly the master thief of 1MDB with a dozen jurisdictions around the globe pursuing the case, including the availability of hundreds of pages of court documents establishing the alleged crimes.

Fuzi, if there is any decency left in you, you should resign forthwith for having issued such a shameful statement and made Malaysia the laughing stock of the world.

Quigonbond: Wrong Mr IGP, it’s not that there is no link. There is just no link our agencies are willing to expeditiously, ably and courageously investigate.

In crises of this nature, when certain people in investigative positions are transferred out or retired, all it takes is really a few good men or women to make the difference.

If the current attorney-general, IGP, MACC chief and Bank Negara governor all resign, BN will run out of excuses, or at the very least whatever subsequent excuse that they will give will be so farcical that even the rural/ Felda folks won’t believe them.

All it takes is these four individuals to save Malaysia. How long do they think they will last? Once their usefulness expires, they will also be forced out, for Malaysian Official 1 cannot afford to have someone to stay long enough to see the complete picture and endanger him.

Negarawan: One thing is for certain. MO1 has created such a big mess for proponents of "ketuanan" in Umno and in all institutions aligned to it.

They know that if MO1 finally gets prosecuted for his alleged complicity in the largest money-laundering scandal in world history, it will undoubtedly leave an indelible mark of shame and guilt on their kind and religion, not to mention the country.

The sheer magnitude and extravagance of the corruption involved in 1MDB are the perfect ingredients of a blockbuster Hollywood movie. The continuous denials, and non-cooperative/defensive attitudes of MO1 appointees, such as Fuzi and AG Mohamed Apandi Ali, are indeed very predictable.

The bad news for MO1 and his cronies is that the US Department of Justice and the Federal Bureau of Investigation have never failed in prosecuting their targets, and this includes former US presidents.

There is a high probability that Jho Low is in hiding in Malaysia because here he can get the full protection of MO1's team. With the confiscation of his Bombardier jet and Equanimity yacht, his ability to move around secretly and to elude the US, Singapore, Swiss authorities have been severely impaired.

I am sure his 30-odd crew members in Equanimity will divulge some information about his whereabouts to the FBI/ DOJ. He could be arrested soon, if foreign authorities work together closely.

Wg321: Last week Rais Yatim, who is also a special adviser to the government on sociocultural matters, said that Jho Low was hunted by eight countries in relation to the misappropriation of billions in 1MDB funds.

He added: "The Royal Malaysian Police does not need to wait for instructions... do your jobs." And within 24 hours, the IGP did his job.

The IGP said: "Ongoing police investigations into 1MDB do not link Penang-born businessman Low Taek Jho (Jho Low) to it."

Gaji Buta: IGP, one question – have you contacted DOJ to find out what the hell they are talking about?

Annonymous: Nothing to link Jho Low with 1MDB, says IGP, is simply due to the fact that none of the authorities in Malaysia, including you - the most powerful man in the police force (responsible to protect the country's interest) – refused to act/have any link with the global authorities or made no attempt to contact your counterparts in Singapore, Switzerland and US who are investigating/ prosecuting the 1MDB-linked criminals.

Lest you are not informed, the DOJ had asked the US court to put on hold the civil suits because they are now pursuing criminal investigation against the perpetrators of the alleged theft.

The Equanimity is being seized because it is an important piece of evidence when criminal charges are eventually filed in court. Now do you get it or do you want to keep pretending ignorance?

Anonymous #21828131: Mr IGP, say whatever you want but DOJ's best is yet to come. The truth is that all straight-thinking Malaysians will never ever believe your stories anymore.

Of course, your latest being that sweet story about the nice fella who would not be claiming about RM1 million of his own money from the Australians.

But looking at the overwhelming 113 comments in Malaysiakini in less than 24 hours, it seems like it is going to be an extremely uphill task for you to change public perception.

Sama2 Rojak: There is no way to express myself except to say that the statement by the IGP is shocking. Either we are corrupt, incompetent, liars or just plain stupid.

I am not sure which category to use.

Cogito Ergo Sum: Yes, we have lost the plot. When the top cop can’t connect the dots in an international crime involving the people’s money, we are done for.

Singapore has jailed several people acting for Jho Low in a money-laundering matter involving 1MDB funds. Yet the IGP has the audacity to say that there was no hanky-panky.