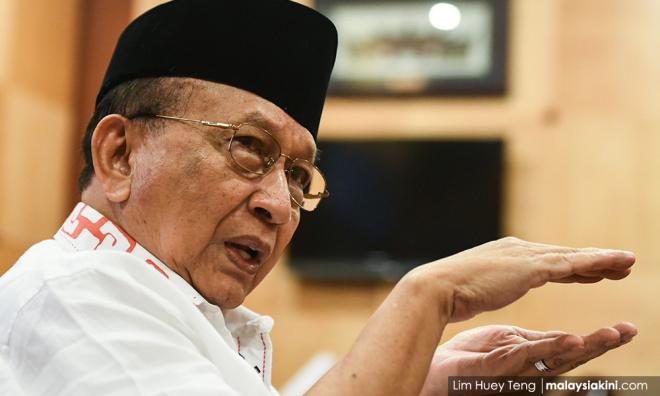 Yoursay: Attacks on Rais show loyalty is fleeting in Umno

Now you know why all the ministers have not uttered a word on 1MDB. In return, they are rewarded handsomely.

Now you know many will come forward and defend him and admonish whoever speaks ill of the Malaysian Official 1 (MO1).

This no-mark Special Affairs Department (Jasa) official Tun Faisal Ismail Aziz is another of these unintelligent poker-faced loyalists, only there to harass the opposition with silly questions.

At least, they are paid well to pawn their souls. Cash is indeed king.

Gerard Lourdesamy: Jasa stands for what now? Was it set up to protect and defend 1MDB-linked individual Jho Low?

So why are ministers jumping up and down to defend Jho Low? Last I checked, he is not a national figure.

If Jho Low is a person of interest to the US Federal Bureau of Investigation (FBI) and the Department of Justice (DOJ) or is the subject of investigation in other foreign jurisdictions, why is the Malaysian government defending him tooth and nail since no wrong was committed by Najib and 1MDB?

I am glad that Pakatan Harapan wants to shut down Jasa if they win GE14. Jasa is increasingly becoming the biggest purveyor of fake news in the country.

Dr Ng SC: It looks like the requirements to be attached to one of these “special” agencies is firstly, have no integrity; second, follow blindly what MO1 says, even if his guilt is beyond apparent; third, have no love, or even have active contempt, for Malaysia, and profess your love only to MO1; and fourth, have very, very thick skin.

LR6SO4BK3: Witness how intolerant and vicious this ruling party had become. Even towards their own.

Former ministers Rais Yatim and Rafidah Aziz are no ordinary members of Umno. But for voicing their fair comments and advice, these two ‘warga emas’ (senior citizens) are being told to get lost.

Remember, when they were first made ministers, Tun Faisal was probably still playing with marbles. So show some respect.

And he accused Rais of not using “proper channels” because the special adviser made his comments on Twitter. But guess where Tun Faisal made his.

Newday: Good on you, Rais, for finally showing in the clear light of day on this smoke and mirrors game that BN is playing.

And what are the “proper channels,” Tun Faisal? The backrooms of MO1’s residence?

Anonymous #19098644: Indeed, those who use the “proper channels” like Muhyiddin Yassin and Mohd Shafie Apdal become ex-ministers.

Is this an admission that Jho Low is the face of 1MDB?

Mosquito Brain: Tun Faisal will be cast out and forgotten as soon as his relevance expires. But even if he isn’t, don’t worry: when the big tree falls, the monkeys will scatter.

To this day, no one dares to. Why keep waiting for “next Tuesday”, MO1? Your name is on the line; your parents' names are on the line.

After all, you are from the party that goes around calling honest and humble men like Robert Kuok “pondan.”

I salute Rais and Rafidah for speaking out. Every nation needs men and women of integrity, like these people.

Our beloved nation cries for leaders of integrity, honesty and humility. We are mortals and we can never carry even a single dime, a single mansion, a single Mercedes, a single diamond to the next world.

The day of reckoning will come.

Rev Dr Sumana Siri: Bravo, Rais! We need leaders like you who would voice out even at the eleventh hour of need.

It is ironic that the least cultured person, Nazri Abdul Aziz, is heading the Culture Ministry.

Negarawan: Hopefully Rais and Rafidah are the much-needed spark to initiate a revolt within Umno. No wonder Najib keeps postponing the Umno elections.

H Basill: The keris that was once used to threaten non-Malays is now slowly but surely being drawn to perform ‘harakiri’ (suicide). This is how it ends.