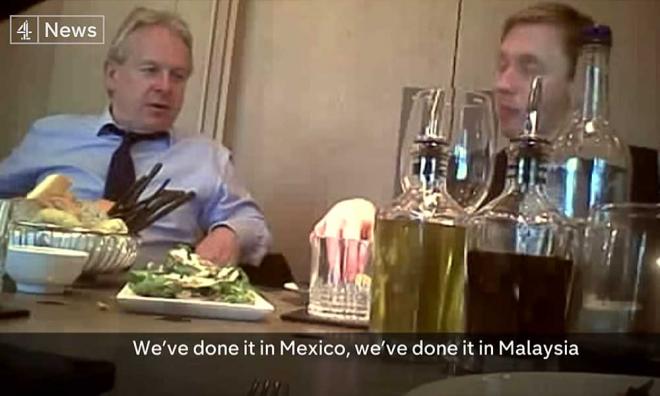 A data company which reportedly played a key role in US President Donald Trump's 2016 election victory has admitted to conducting operations in Malaysia.

An undercover video by UK's Channel 4 has Cambridge Analytica chief data officer Alex Tayler saying the company has used data gathering to profile people to give them targeted messaging for elections in the US and Africa.

The duo revealed this in a series of meetings in London from November 2017 to January 2018 with a Channel 4 fixer posing as a potential client from Sri Lanka who wanted to help politicians there.

At a later meeting between the fixer and Turnbull, the executive revealed that the company at times worked under a different name if a client does not want to be linked to Cambridge Analytica.

On its website, Cambridge Analytica said it had done work for BN in Kedah since 2008.

"CA supported BN in Kedah state with a targeted messaging campaign highlighting their school improvements since 2008.

"BN won Kedah back from Pakatan Rakyat in the 13th general election and walked away from a successful campaign. With wins in 21 out of 36 state seats and 10 out of the 15 parliamentary seats in the state, BN enjoyed a landslide victory," it said.

It is unclear if Cambridge Analytica had engaged in any other operations in Malaysia.

However, Channel 4 has linked the company to a 2017 fake news campaign run in Kenya against opponents of current president Uhuru Kenyatta.

Turnbull, in one of the meetings, said the company's job was to discover the deep-rooted fears of its target audience.

"It's no good fighting an election campaign on the facts, but actually it's all about emotion."

Turnbull, however, denied that the company engaged in deceit.

But at a later meeting where Turnbull is also present, Cambridge Analytica's chief executive Alexander Nix is caught on camera admitting that the company engaged in entrapment strategies such as secretly filming one of its operatives bribing politicians, or sending girls to their homes.

“We’ll offer a large amount of money to the candidate, to finance his campaign in exchange for land, for instance, we’ll have the whole thing recorded, we’ll blank out the face of our guy and we post it on the Internet," Nix said.

He also suggested that women from Ukraine can be used to seduce politicians.

However, he said he is just giving examples of "what can be done and what has been done".

The company has denounced the Channel 4 report and claimed that Nix and Turnbull were only humouring the fixer, who had asked about engaging in illicit activities, to find out his true intentions.