The controversial Anti-Fake News Act 2018 has been included as a part of global press freedom watchdog Reporters Without Borders' (RSF) latest submission on Malaysia to the UN Human Rights Council.

According to the group, Prime Minister Najib Abdul Razak has ignored UNHRC's past recommendations and their latest submission continues to highlight a disturbing decline in Malaysia's press freedom over the last five years.

"Far from taking into account the recommendations made by the Human Rights Council made during Malaysia’s previous Universal Periodic Review in 2013, Najib and his government are stepping up their harassment of independent media outlets in the run-up to the 2018 general elections," said RSF in a statement.

Among others, the group said its submission on Malaysia for the current UPR session highlighted how existing legislation was still as draconian as ever and had driven Malaysian journalists to self-censorship.

"The latest example is a so-called anti-fake news law that the Parliament passed on Monday," said the RSF in noting that the new law provides for sentences of up to six years in prison and/or a fine of up to RM500,000.

"The law also applies to content published abroad and to foreign media," it further noted. 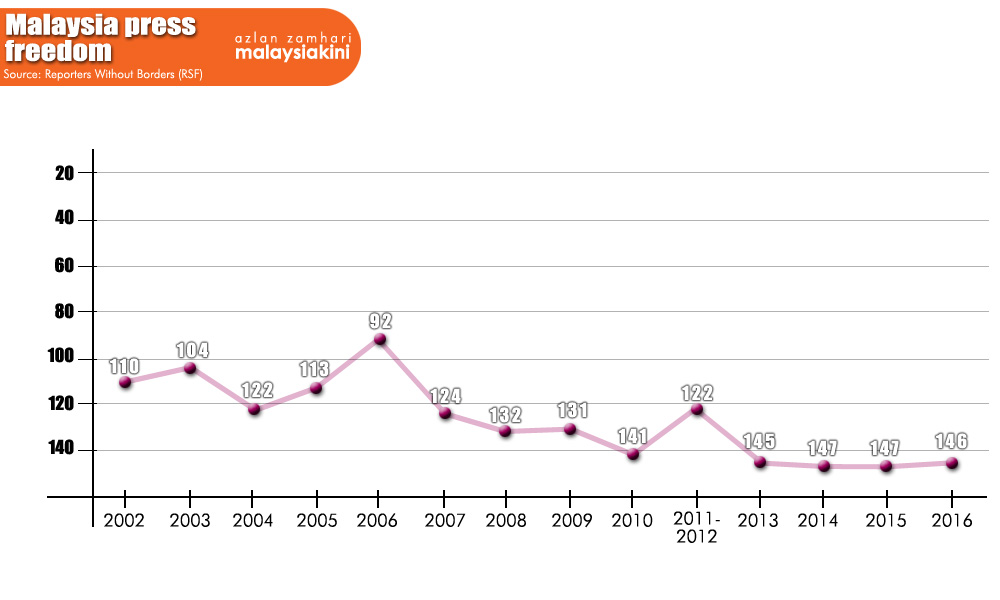 As a part of its submission to the UNHRC, RSF said it has also made 10 recommendations to the Malaysian government including calls to withdraw the newly passed Anti-Fake News Act 2018.

This was on top of urging Malaysia to repeal or amend repressive laws including the Sedition Act 1948, the Printing Presses and Publications Act 1984, the Official Secrets Act 1972, the Prevention of Terrorism Act 2015 and the National Security Council Act of 2015.

It also recommended the government stop blocking independent news websites and guarantee online freedom of the press and freedom of expression.

Aside from recommendations on laws that suppress freedom of the press, RSF said Malaysia should also move towards setting-up an independent media regulatory body to address issues surrounding government control over the media.

Various local media groups in Malaysia have spoken out against the Anti-Fake News Act 2018 as yet another threat to press freedom in the country.

The groups also called for the government to abolish the archaic PPPA and pushed for a move towards self-regulation of the industry.

Read more like this :
#antifakenewslaw
#rsf
View Comments
ADS
Most Read
Most Commented
Most Recent
ADS