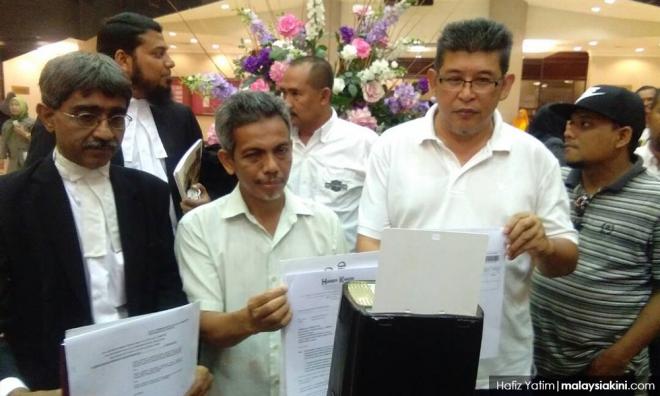 The High Court in Kuala Lumpur today dismissed the leave application on the judicial review application brought by 16 "sacked" Umno members against the Registrar of Societies (ROS).

The review is to seek the ROS to quash its decision last month to allow Umno extend its party elections until April 2019, to investigate the complaints made and reply to them, and also a dissolution of the party.

"Hence the application is dismissed without costs," he said.

He noted that despite the decisions in the Semenyih Jaya Sdn Bhd and Indira Gandhi Federal Court cases, it does not apply to political parties.

Citing Section 18C, as brought up by the Attorney-General's Chambers in its objection, Justice Kamaludin said the decision of a political party or any person authorised by it, or by its constitution or rules or regulations made, shall be final and conclusive, and such decision shall not be challenged, appealed against, reviewed, quashed or called into question and no court shall have jurisdiction to entertain or determine any suit, application, question or proceeding on any ground regarding the validity of such decision.

In the Indira Gandhi and Semenyih Jaya case earlier this year and last year, it was ruled that the High court had the inherent jurisdiction under Article 121 (1) as judicial independence and the separation of powers are recognised as features in the basic structure of the constitution.

"The inherent jurisdiction of the civil courts under Article 121 (1) is inextricably intertwined with their constitutional role as check and balance mechanism.

However, Justice Kamaludin said having considered the Indira Gandhi and Semenyih Jaya cases relied on by Haniff, those cases in his view can be distinguished from the present application.

"The cases are not dealing with decisions of a political party on any matter relating to the affairs of the party within Section 18C of the Societies Act.

"I cannot ignore the decision made in the ROS vs Justin Jinggut, (in 2013) clearly excludes the jurisdiction of the courts from going into merits of any disputes between members of a political party," he said.

"Effect must be given by the Parliament to enact Section 18C, as the words 'no court shall have jurisdiction to entertain or determine any suit, application, question or proceeding on any ground regarding the validity of such decision'. These words clearly show that Parliament intended to exclude the jurisdiction of the courts," he added.

For this reason, Justice Kamaludin dismissed the leave application.

Salihudin, who was present, told reporters that he and the other "sacked" Umno members are disappointed with the decision and said that he has not received any notification from Umno secretary-general Tengku Adnan Tengku Mansor that they were sacked.

"We filed the application on April 20 and the said notice to expel us was dated April 21. Hence, we have the legal standing and will continue with the challenge by appealing today's decision," he said.