GE14 | Hours before Malaysia decides which coalition wins the mandate to rule – incumbent juggernaut BN, or opposition alliance Pakatan Harapan – a small group of Malaysians are working tirelessly to ensure that postal votes make it home.

This year, the Election Commission again granted limited rights to the postal vote for overseas adult Malaysians. But between the short campaign period and allegations of ineffectiveness, many Malaysians were left bereft of their ballots, with reports of the couriered packages arriving as late as today - the same date as the 14th general election.

Some Malaysians received their ballot papers as late as May 7 or 8, leaving precious little leeway for it to be signed, witnessed, and couriered back to their respective electorates’ returning officers.

Finland-based student Hor Ying Jie was still waiting for his ballot on the evening of May 8, and found the timeframe the EC had set “ridiculous.”

“If this was done on purpose, then they’re sabotaging the elections,” Hor said. “If they didn’t foresee that coming, then Malaysia has really incompetent people making important decisions.”

In an attempt to counter the worldwide delays, an organic grassroots movement of Malaysians scattered across the globe has organised to bring votes home, coordinating almost entirely through social media networks.

Australia-based software engineer Jer Min Kok, 39, booked a flight home to vote after his postal vote application was denied on what he says was a mistake.

“My application rejected because the EC said I hadn’t stayed in the country for over 30 days in the last five years, which is incorrect. Nevertheless, I decided to fly home to vote.

"I’d heard about all the voters receiving their ballots too late to courier them back in time, and offered to carry some home for friends. Through word of mouth, I ended up carrying back over 30 ballots and another friend who was flying back collected about 10,” he said. 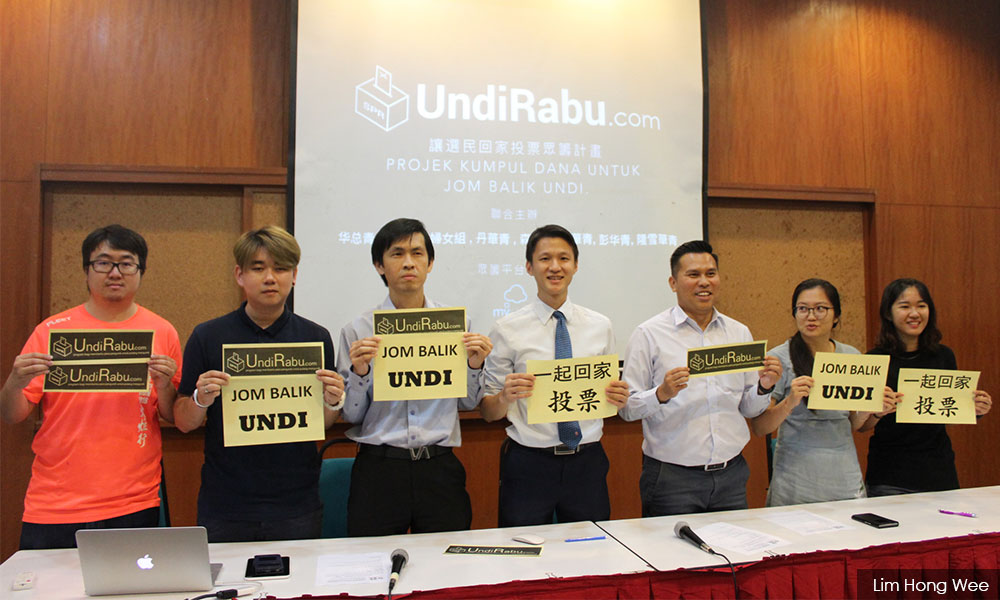 Upon reaching Kuala Lumpur, Kok distributed the ballots slated for return to constituencies near him. He passed the rest to volunteers working with the UndiRabu get-out-the-vote movement gathered at the Kuala Lumpur-Selangor Chinese Assembly Hall, where they were sorted and put on buses headed to various states across Malaysia.

The process of coordinating runners – for both the international and domestic legs – was simultaneously ad hoc and painstakingly planned.

Key to this movement was Facebook group GE14: Postal Voters Discussion, which has over 2,000 members – bearing in mind that there are, according to the EC, only 7,979 postal voters. Helmed by Alex Yap and a few others, the group connects Malaysians across the world and facilitates the baton relay of ballot papers.

“The work was initially quite lightweight, but as the polls date drew closer, the operation got pretty complicated,” said Yap.

“At first it was just voters trying to figure out the process and how soon they got their votes, eventually becoming a process of how to get through the various mechanisms (the EC, PosMalaysia, candidates, DHL) to locate the vote, to figuring out how to mark the vote and seal the vote properly, and finding witnesses.

“Now it’s basically everyone figuring how to match ‘runners’ to bring the votes back home. Some can be as complicated as a runner getting a vote from Melbourne to KL, and passing it to another runner who is transiting from Hong Kong to Penang via KL,” he said, likening it to a 3D game of chess.

The group works with PulangMengundi, a volunteer-run initiative that worked to collect and distribute funds for Malaysians who were having financial troubles getting back to their constituencies to vote.

PulangMengundi co-founder Sue Ling Gan joked that as a result of the work ordinary citizens were putting into ensuring their vote was counted, “Malaysians are getting on-the-job training on how to be the EC themselves.”

Lydia Chai and Pam Wong, members of electoral reform movement Global Bersih’s New Zealand chapter, collected over 100 ballots to be flown back on the eve of GE14. But the hard part, Chai said, came with creating a cohesive chain.

“As soon as our runner touches down, he’s meeting about 50 people. Most of the ballots will be collected from him, but some are not so straightforward – they’ll be going across the country.

"Some have two or three more locations to get through after the airport, and I know there’s one person who is meeting the runner at the airport to take a ballot to Sarawak. We engineered these chains using Facebook, friends of friends, reaching out to strangers. It’s very haphazard.”

The trust that voters were willing to place in virtual strangers, Chai noted, was a sign of how much the EC had failed the ordinary Malaysian. Courier services have received so many phone calls from Malaysians eager to vote that the courier company DHL’s offices in New Zealand began referring them to the Postal Voters Discussion Facebook group.

“When I called up the office to track my own ballot, the guy I spoke to actually was clued in regarding the situation, and asked me about what to tell other Malaysians who called up!”

In Houston, a group of Malaysians decided to really fly by the seat of their pants – they turned up at the airport brandishing placards that asked if anyone was headed to Kuala Lumpur. 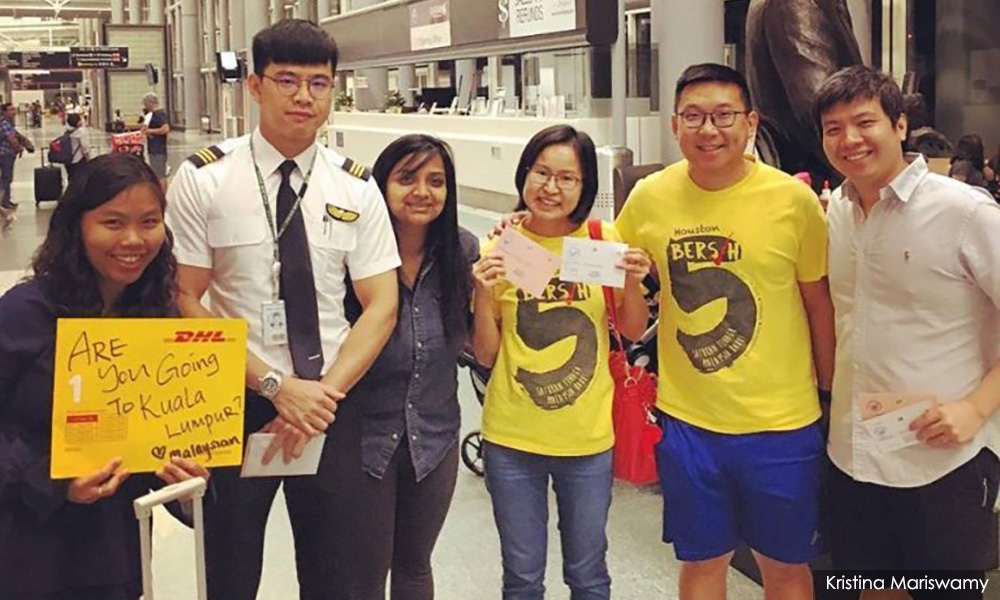 “We showed up, held up signs, and right before the final check-ins were over, lo and behold, one of the pilots was Malaysian, on the way home to vote! We sealed everything in front of him, and he was gracious enough to take our ballots home with him,” said Kristina Mariswamy in a public Facebook post.

Meanwhile, in the United Kingdom, PhD candidate Amira Shaffee and a few others flew down a friend to help them return their votes.

“We anticipated the votes would arrive late and thought it would be good to just get Zarif (Sofian) to take them back for us. We all chipped in for his ticket. By the 6th we still hadn’t received anything and decided rather than send him back empty-handed we’d open it up – we managed to send back more than 10 ballots.”

Global Bersih’s Sydney chapter secretary Jason Goh said that the EC had not done much to improve the perception of its trustworthiness.

“While Malaysians scramble to find out the hows and the whys, and panic over the delivery and returning of their votes, it has remained silent. While the EC’s failure to perform its public duty would’ve disenfranchised many, it’s heartening to see the opposite effect.”

This was echoed by Yap, who noted that Malaysians were determined to express their political decision, defending it fiercely and without compromise.

“Everyone is being really flexible and resourceful. I think it shows how determined we are to make things happen and how much we are willing to go through to support each other in difficult times.”

While this happens, the EC – already contending with public outrage after setting a midweek polling date – has remained conspicuously circumspect about the delayed ballots. 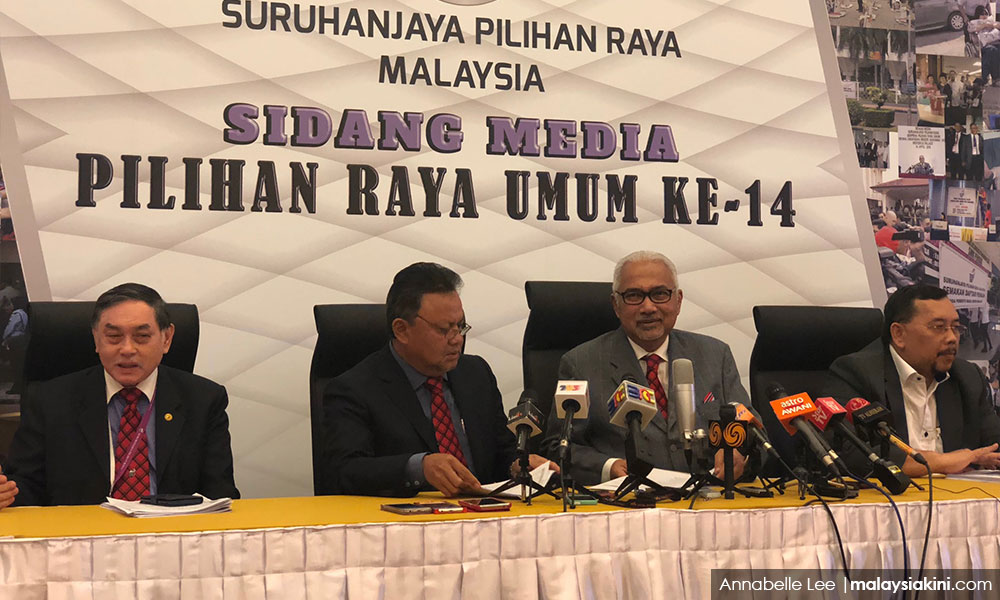 EC chief Mohd Hashim Abdullah claimed at a recent press conference that there were no technical problems, and that people were merely complaining out of excitement to vote.

He also warned Malaysians to not send their ballots at the last minute, saying that the 11-day campaign period was sufficient time to mail back the postal vote if Malaysians did not delay sending it back.

Deputy Home Minister Nur Jazlan Mohamed also weighed in, saying on Twitter: “Number of Malaysians voting overseas is abt 8,000 and not even 0.1% of the population as i thought earlier. Dont get excited abt it”.

This statement earned him irate feedback, with some hoping “May you lose Pulai (his constituency) with about 8,000 votes, Jazlan.”

Meanwhile, Omaha-based voter Eswari Kalugasalam who has no Malaysians living near her and received her ballot paper on May 7, has FedExed back her ballot – to the tune of US$114 – hoping against hope that it will arrive in her home state of Johor before 5pm today.

“Way before the elections, I checked on hotel and flight fares to the Malaysian embassy so that I could vote. Then came news that I could register to be a postal voter. I did. Was excited when I received response from EC,” she said.

“I trusted the process, despite everyone else casting doubt on its efficiency and transparency. I am angry and frustrated. Every vote counts. I am a Malaysian. I am not about political parties. I am about doing the right thing.”

This article was first published in New Mandala.

Sending my vote home, thanks to the kindness of strangers