GE14 | A new government, comprising a coalition of perhaps five parties, is set to be sworn into Putrajaya.

The main part of this coalition is Pakatan Harapan, which comprises PKR, DAP, Bersatu and Amanah, and the Sabah-based Warisan.

In total they make up 121 parliamentary seats, enough to form a stable government. If the PKR-backed Batu MP P Prabakaran is counted, the number climbs to 122.

There are also three other players. One is independent Julau MP Larry Sng, who won due to an informal deal with Harapan which saw the coalition giving way to him for a direct fight against PRS.

The other is independent Lubok Antu MP Tambat @ Jugah Muyang, who pulled off a surprise win against PKR and BN.

The third is Jeffrey Gapari Kitingan, who is part of Star, which may form a coalition government with Harapan and Warisan in Sabah due to a hung assembly.

If these three join forces with Harapan at the federal level, then the coalition's number can be as high as 125 seats.

What does it mean for Harapan?

For one, PKR has emerged as the largest party of Harapan. This would allow the coalition to dispel the often repeated claim by BN that it was "dominated" by DAP.

PKR's big boost in the parliamentary seats it won was largely due to the party contesting in mixed seats.

While Bersatu and Amanah also rode on the Malay wave, they typically contested in seats which have big Malay majorities.

However, with fewer anti-establishment Chinese voters in such constituencies, they could not sufficiently mitigate the PAS factor.

What does it mean for BN?

BN won a total of 79 parliamentary seats in the 14th general election.

The MCA saw its seven parliamentary seats reduced to one.

Meanwhile, the MIC's parliamentary seats were halved from four to two while Gerakan was wiped out.

The two MIC seats were won by M Saravanan in Tapah and C Sivarraajh in Cameron Highlands. 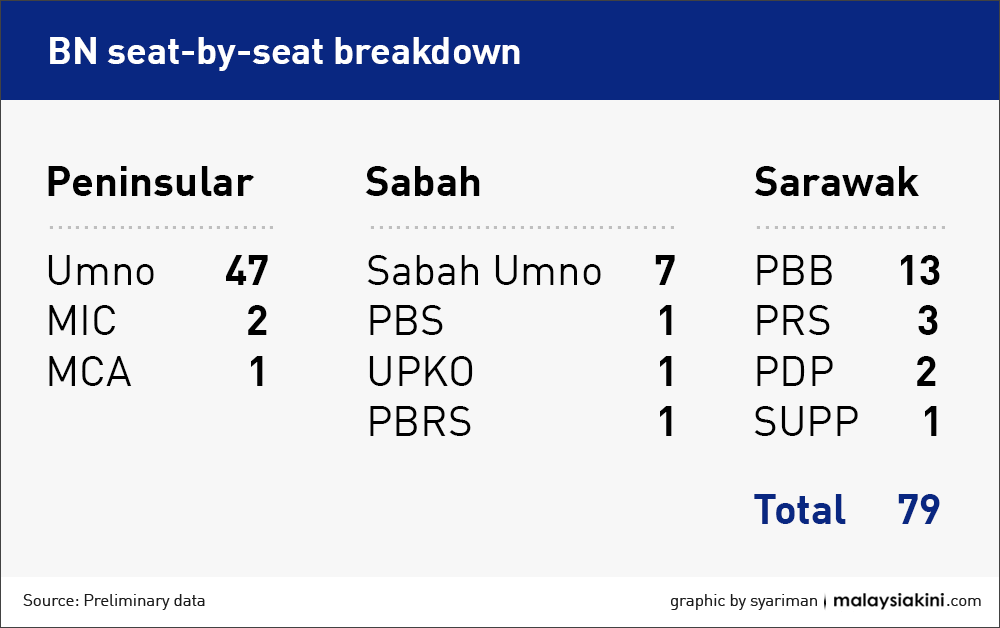 Their defeat will likely see a renewed period of uncertainty in the BN component parties and possible internal transition of power favouring the few who survived the general election.

In Sarawak, Umno does not exist, as BN there is led by PBB.

The breakdown of seats in Sarawak after the 14th general election is PBB 13, SUPP 1, PRS 3 and PDP 2.

In Sabah, Umno has seven seats, however, its partners there have also been severely weakened, with PBS, Upko and PBRS all only winning one seat each.

With BN severely weakened and almost reduced to only Umno, it remains to be seen if its East Malaysian component parties will remain in the coalition.

The formation of a new East Malaysia coalition cannot be ruled out.

The outcome of the general election could see a realignment of parties and possible mergers. 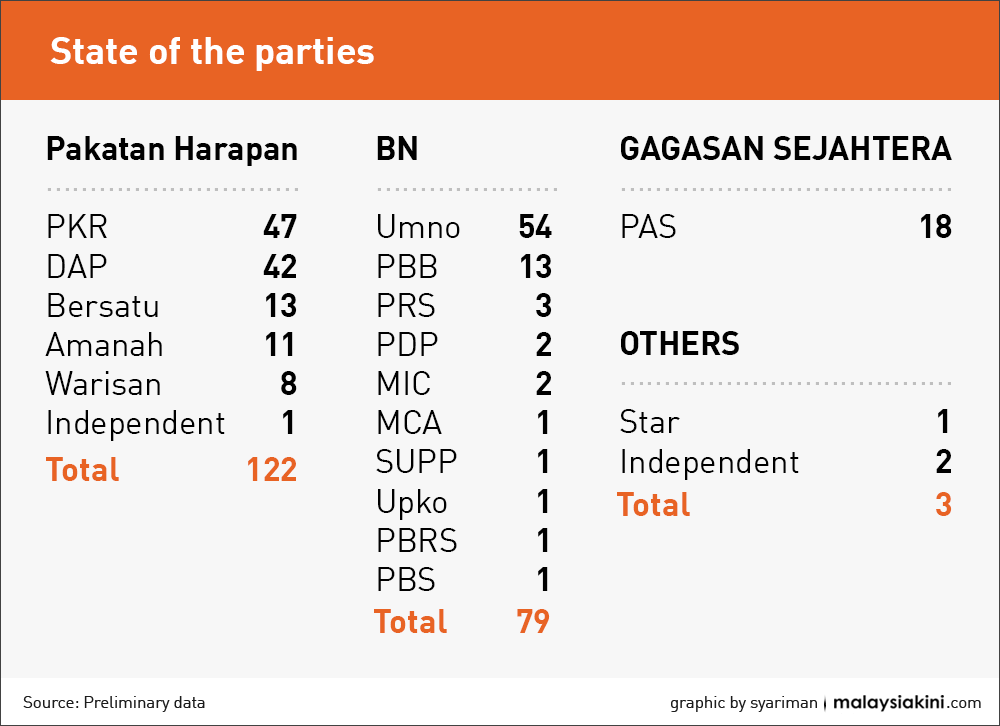 What does it mean for PAS?

In the run-up to the general election, Harapan had been touting a "Malay Tsunami" while PAS touted a "Green Tsunami".

Both sides were to some extent right, as Harapan swept the west coast while PAS swept the east coast of Peninsular Malaysia.

BN lose a substantial number of voters to Harapan and PAS, with one getting more than the other depending on states.

PAS remains a relevant force, having won 18 parliamentary seats and is a kingmaker in Perak where there is a hung assembly.

Prior to the general election, there had been many overtures between PAS and BN with talks of forming a Malay Muslim-only government.

Following the general election, even if BN and PAS were to join forces at the federal level, they will only have 97 seats, which is not enough to form the government.

And even if Bersatu decides to recombine with Umno, which is unlikely as it has already won power, the three parties would have a total of 110 parliamentary seats - two short of a majority.

Furthermore, a mono-ethnic, mono-religious coalition will not be acceptable to East Malaysian parties, which could quit the BN as a result.

What's the popular vote in GE14?

According to preliminary data, no single party garnered more than half of the popular vote due to widespread multi-cornered fight.

The preliminary calculation showed Harapan won around 45 percent of the popular vote followed by BN with 32 percent and PAS by 16 percent.

The remaining was won by other smaller parties or independents.

Read more from this author :
KiniGuide
Read more like this :
#ge14
#kiniguide
View Comments (0)
ADS
Most Read
Most Commented
Most Recent
ADS