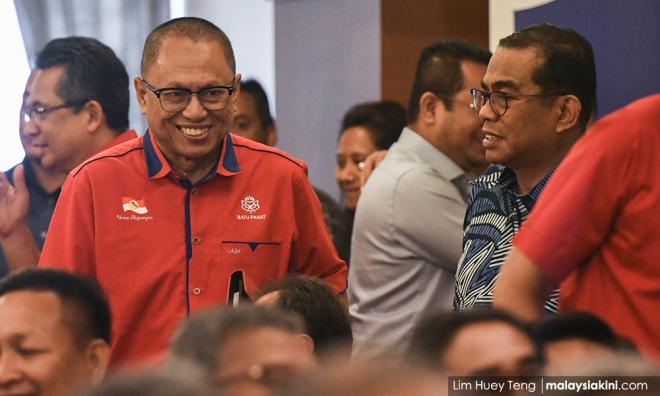 The final results of the Umno supreme council line-up are in and the verdict is clear - Umno wants to stay the course despite its defeat in the 14th general election and disloyalty will not be tolerated.

At face value, more than half of the 25 elected Umno supreme council members are new faces but the line-up was hardly a paradigm shift.

The new faces won not by challenging the status quo but were merely filling up the vacant positions left behind by incumbents who did not contest or were contesting for more senior posts.

Out of the 25 Umno supreme council member positions, 14 incumbents contested to retain their position and Umno delegates who voted yesterday decided to keep almost all of them.

Only three out of the 14 elected Umno supreme council incumbents were voted out, namely Mohd Puad Zarkashi, Shahidan Kassim and Idris Haron.

Both Puad and Shahidan had rebelled against the party and were punished.

Puad threw a tantrum before the May 9 general election for not being allowed to contest the parliamentary seat of Batu Pahat while Shahidan had lashed out at the central leadership for refusing to support him in a very public spat with the Perlis royal household over the appointment of the state menteri besar.

Idris was not known to be a rebel and is the only anomaly, having also been ousted as the Tangga Batu Umno division chief.

As for the remaining 14 positions - three comprising the slots previously held by Puad, Shahidan and Idris and another 11 left vacant - they were mostly filled with new faces but also some of the most prominent defenders of former Umno president Najib Abdul Razak.

Among them are Lokman Noor Adam, Ahmad Maslan and Fathulbari Mat Jahya.

Below is the breakdown of the Umno supreme council election results:

A large number of vacant Umno supreme council member positions were in part contributed by the fact that the topmost Umno leadership - comprising the president, deputy president and three vice-president positions - had disintegrated.

This left Ahmad Zahid Hamidi as the sole incumbent in the top five of the Umno leadership to contest in the party election. He subsequently became the new Umno president.

Below denotes what happened to the other Umno supreme council member incumbents in yesterday's party election.