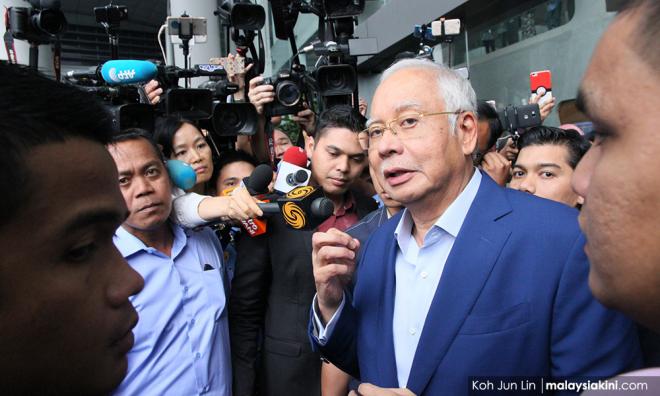 LetTruthAndJusticePrevail: Common sense and logic dictate that the onus is on whoever claims to be the rightful owner of any merchandise to produce the details and descriptions of each and every merchandise/item, together with receipts for payments made.

The onus is certainly not and never should be on the police to show to the claimant/s each of the items complete with images and detailed descriptions for the claimants to then somehow concoct or fabricate or corroborate stories and fairy tales of how they were gifted with these items.

But by the same token, let us assume that all of the said items were gifts, didn’t someone go on record to say that the idea of giving and receiving ‘gifts’ means or connotes the idea that the giver or gifter is expecting ‘something’ in return from the receiver and hence the ‘intended receiver’ takes it upon himself or herself to decline such gifts?

So let’s say there’s no contradiction of principles here. So such an outrageous number of items were, I suppose, accepted or received under extreme duress? Such a predicament! Please accept our utterly sincere sympathies.

Lodestar: Former PM Najib Razak explaining away this gargantuan pile of valuables as the gifts of foreign leaders and personal friends is about as credible as telling us that he materialised them out of thin air with a magic wand.

There is, first of all, the sheer quantity and, secondly, the lack of variety in these supposed "gifts."

There are only a few types of items in the collection, being practically all for female adornment. For instance, there are 567 handbags, 1,400 necklaces, 2,200 rings and 2,100 bangles.

It's very hard to believe that these mythic gifters were so narrow in their choices. It's more likely that someone has a fetish for these objects and unlimited means to satisfy her urges.

So PM Dr Mahathir Mohamad has a museum in Langkawi with 9,000 items. But these are gifts to the nation rather than to him personally and, considering their variety, they are plausibly what foreign dignitaries might bring, not an endless supply of bags, rings and bangles.

Pokok Kelapa: But here's the kicker: The Obamas don't actually get to keep these presents. As per US government protocol, they must accept the gifts in cases where "non-acceptance would cause embarrassment to (the) donor and US government".

The items must be later turned over to the National Archives and Records Administration, or the recipient can pay the market value of the gift and keep it.

Vijay47: Najib, what I discern from your version of Aesop's fairy tales is that everything is relative - that Mahathir did it, Michelle Obama got it, and King Abdullah Abdulaziz Al Saud gave it.

Thus, all the accusations against you about the kings' ransom you casually store at home are pure lies by persons with secret agenda.

I am surprised you did not add that. Since the seizure was ordered by Mahathir, you will respond accordingly when you also are again PM at age 93 years.

Much of your defence seems to be that the gifts were generally from foreign leaders and under the law, it is not illegal if given, say, for your birthday. Really?

Under what law - the Umno constitution? Birthdays? How many birthdays have you had lately? And foreign leaders give you multi-million dollar presents?

But I admire that even in the depths of despair, you have time for humour – you state that as a leader, you know you should not indulge in expensive items. Again, really?

When you and your wife went on your countless international jaunts, did you rely on AirAsia, no doubt with Tony Fernandes faithfully in tow?

Then you resort to the familiar family line of defence, that your collection of jewellery, currency and Hermes, Bijan and Birkin handbags began about 30 years ago. Just about the time Jane Birkin finished the film “La Pirate”.

Abasir: Other than the fact that someone is going to jail, what this revelation does is to put Pakatan Harapan politicians and all those intending to join them on notice. Expectations are being set as to what is reasonable and what is not.

There will from now on be greater public scrutiny about what "New Malaysia's" politicians and their wives wear, who they cavort with, what they and their children drive, where they live and who they invite over for drinks after dinner.

Tolerance for the kind of flashy living we have seen by Umno chieftains and their thieving warlords will be at an all-time low.

Now is that a good thing or will it drive away "talent" from the political stage?

In fact, I am generally misbelieving of all Malaysian politicians. I would not want any of them, including Mahathir, making decisions for my life. I did that with Najib and basically got screwed.

What is also very wrong in Malaysia, as one of the critics of Malaysia wrote recently, is that "the law in Malaysia is an ass". He's right.

Most Western democracies have parliamentary rules and even laws that forbid politicians from receiving gifts of any kind from anybody anywhere in the world.

But Malaysian politicians do not seem to think, even today, that there is anything immoral, unethical, verges on conflict of interest and can be seen as hypocritical and potentially lays the basis of corruption or corrupt influence.

This Harapan regime needs to pass laws that make receiving and giving gifts to and from politicians illegal. And there needs to be a parliamentary protocol or rule that forbids it completely.

If they should breach it, they should be sacked immediately and, given the maniacal scale and depth of Malaysia's corrupt status globally, given mandatory prison sentences.

The question is whether the Harapan regime has the spine and political will to enact such laws and rules, and soon.

Yoursay: Perhaps PDRM can carry out a 'Cinderella' test