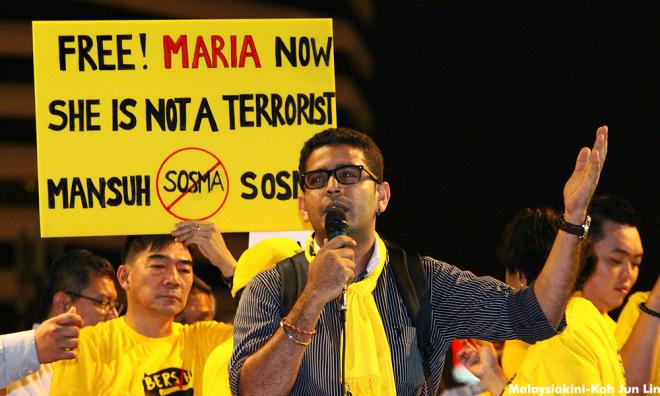 COMMENT | I refer to former premier Najib Razak's statement yesterday claiming that the Security Offences (Special Measures) Act 2012 safeguards lives and property, and calling for the security forces such as the armed forces and police to be consulted on whether to abolish it.

To seek the approval of the security forces to repeal a law creates a dangerous precedent, and is tantamount to endorsing a police state in Malaysia.

The question is whether Sosma 2012 is repugnant to the rule of law and our democratic freedoms. If it is, then it cannot be tolerated. It is not about the expediency of the moment, but about upholding the constitution.

It is shocking that Najib and the BN failed to grasp this important principle. (Prior to this, BN chief Ahmad Zahid Hamidi had also called for Sosma to be maintained.)

The decision whether to abolish or not must be made by the democratically elected government of the day, through debate and decision in Parliament. The security forces must not be dragged into such matters.

This [call by Najib] is typical of the maladministration and lack of principle under the BN. (When in government, they had refused to implement the IPCMC recommended by the royal commission of inquiry, because the police force had raised objections to it.)

Sosma is in blatant contravention of the fundamental rights guaranteed in the constitution; it drastically deprives Malaysians of the right to a fair trial. It belongs in the trash heap of history.

But it is not surprising that Najib and other BN leaders do not want Sosma to be repealed. Oppressive laws such as Sosma were used by the BN to persecute political opponents.

This is the reason Najib and BN cling on to these unjust laws.

During his time in power, Najib illegally used  Sosma in order to protect himself from investigation and prosecution over the 1MDB scandal.

1MDB critics such as Khairuddin Abu Hassan and Mathias Chang were detained and held in prison without bail under Sosma. Their only crime was lodging reports overseas to facilitate investigations into Najib's role in the theft of 1MDB monies.

Activists, civil society leaders and the opposition were also arrested and detained under Sosma-related laws merely for organising peaceful assemblies against the BN government.

In short, Najib had used Sosma to save his own skin. Thus, his claim now that Sosma is necessary to preserve security and save lives, is false and hypocritical.

It is another cynical attempt by the BN to obstruct the new Pakatan Harapan government from carrying out the reforms necessary to create a free and democratic Malaysia.

In any event, Sosma is a procedural law; if it is repealed the offences relating to terrorism and offences against the state in Part VI and VIA of Penal Code will remain valid law.

It is nonsense to say that repeal of Sosma will put at risk "lives and property" as claimed by Najib. This is irresponsible scare-mongering, unsupported by any real facts.

The existing provisions of the Criminal Procedure Code (CPC), which allows arrest and remand in police custody up to 14 days, is more than adequate to deal with terrorism and other serious offences.

Even the United Kingdom, which faces a much higher terrorist threat, only allows pre-trial detention of up to 14 days for terror suspects.

The Harapan manifesto promised that the country would be rid of all oppressive laws; in that spirit, Sosma must be repealed entirely.

N SURENDRAN is adviser for rights group Lawyers for Liberty.