11.55am: Justice Nazlan fixes Friday to hear the submissions on the gag order.

The trial dates are likely to be fixed on the same day after the issue on the gag order is settled.

11.50am: Shafee says the defence should get the documents first.

He adds that the matter should not be rushed and asks for a case management date to fix the trial dates.

Justice Nazlan says he is prepared to hear the issue of gag order today.

However, Shafee replies Friday is appropriate as the submissions between the parties were only exchanged today. DPP Manoj concurs.

11.45am: Shafee tells the court that the defence has yet to receive the documents, including Najib's caution statement.

On the gag order, he requests the court to hear the matter on Friday.

He also informs the judge that the earliest dates he has for the trial are in February next year.

DPP Manoj clarifies that the parties never agreed on the February dates and prefer the trial to be held in November this year.

11.40am: DPP Manoj asks that the bail for today's charges be extended and Shafee thanks the prosecution.

He asks that all related documents be tendered to the defence. 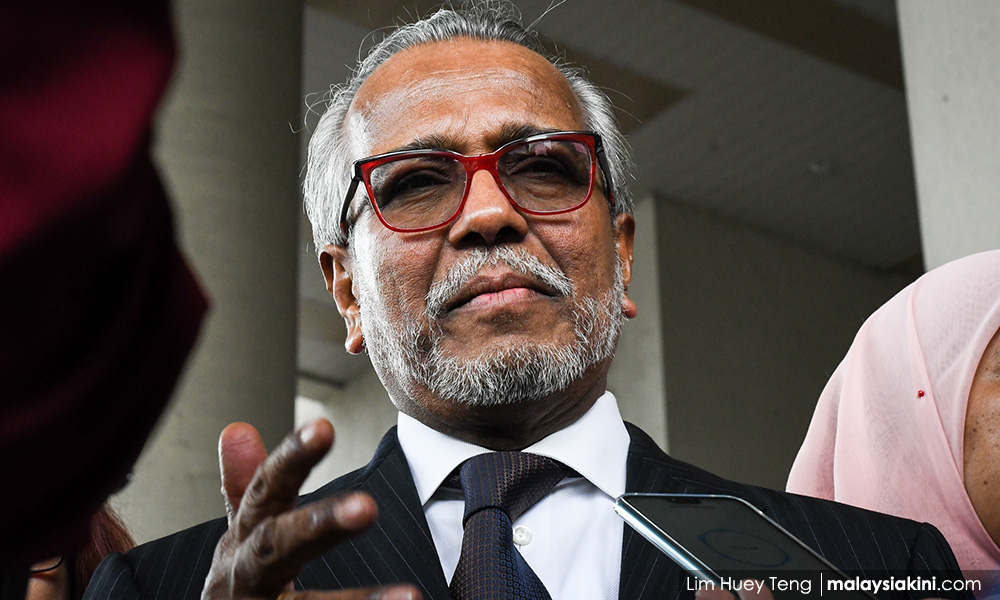 11.33am: Shafee (photo) reminds the court that the judiciary should remain independent.

DPP Manoj says this is an ordinary transfer of a judge.

He questions why Shafee had to raise the issue now when he has no objection.

Shafee and DDP Manoj get into an argument.

The prosecutor asks the court for a speedier trial.

11.25am: Shafee points to a letter he wrote to Chief Judge of Malaya Zaharah Ibrahim.

He says the letter is an observation on the administration of justice in the country in relation to this case.

He says he is not undermining Justice Nazlan's qualification.

Shafee says his client complained about the administration of justice and that this is a highly sensitive case.

"When the transfer (of the judge) happened, the Bar Council kept quiet," he says.

11.18am: DPP Manoj says the prosecution is amending the earlier charges made on July 4.

DPP Manoj applies to the court for the cases to be consolidated.

11.15am: DPP Manoj says the new charges have been mentioned at the High Court 1.

He asks for the charges to be read again and for Najib to make his plea.

All charges are read including the punishments, and Najib nods to indicate he understood the charges proffered.

He claims trial to all the charges.

11.03am: Najib enters the High Court 3 and is seated in the accused dock.

His children are seated on the second row in the public gallery. Also present is Najib's press secretary Tengku Sariffuddin Tengku Ahmad.

Now DPP Manoj Kurup takes over and introduces the parties.

He informs the court that the case has been transferred from the Sessions Court.

10.24am: Najib enters into High Court 1 from the witness room. 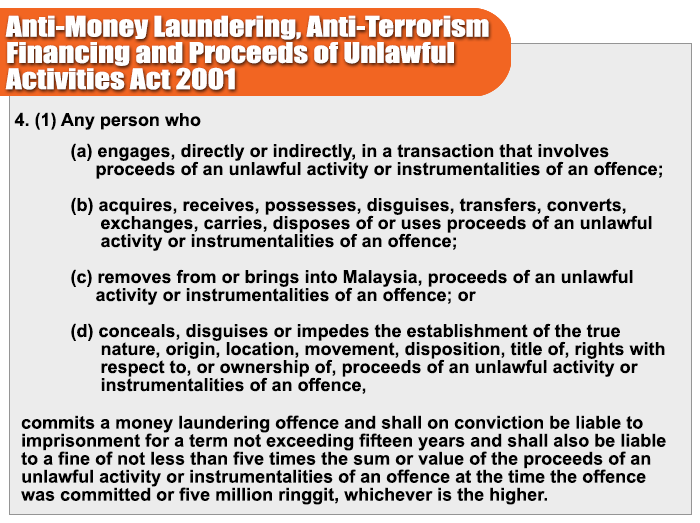 10.08am: Under Section 4 of the Anti-Money Laundering, Anti-Terrorism Financing and Proceeds of Unlawful Activities Act 2001, if convicted, Najib stands to face a jail term of up to 15 years and fine of up to five times the amount for each money laundering charge.

9.40am: A Najib supporter who introduces himself as Daniel Goh insists it was not their "rowdiness" during Najib's first court appearance which had led to the police preventing their entry today.

"We were not harassing the attorney-general. I totally disagree with your use of the word 'rowdiness'," says Goh (photo). 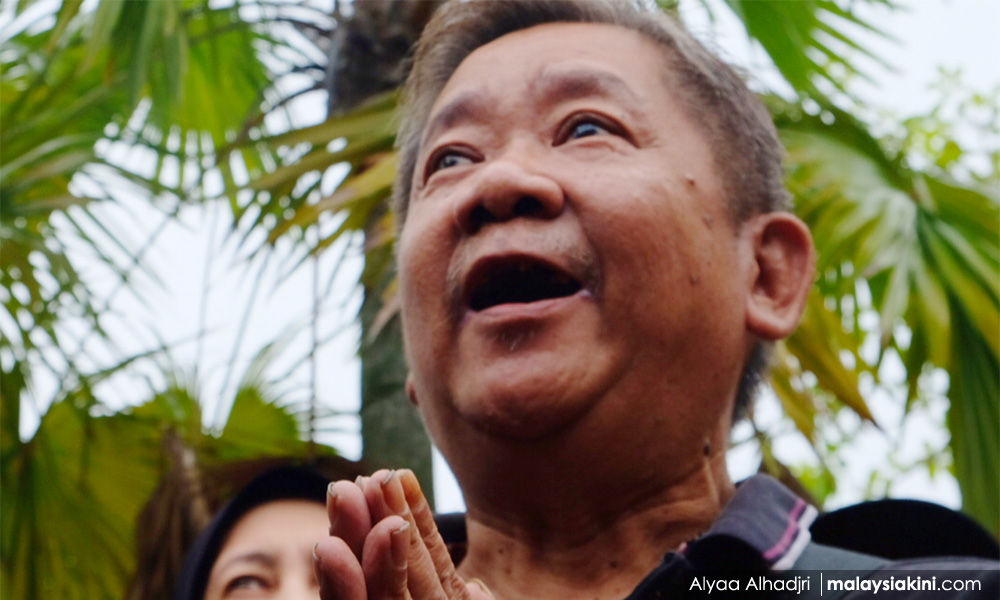 He is responding to a question from a foreign journalist who alludes to the commotion caused by Najib's supporters on July 4 as they insisted that AG Tommy Thomas should conduct his press conference in Bahasa Malaysia instead of English.

Ellie proceeds to explain they were only responding to alleged provocations by DAP leaders, including Finance Minister Lim Guan Eng's press statement issued in Chinese.

Goh further says that Thomas had spent many years in Canada and proceeds to question the journalist who pointed out that Lim's press statement was issued for benefit of the Chinese vernacular media.

"You (the journalist) argued that there are many vernacular speakers in Malaysia.

"Tommy Thomas spent many years in Canada. There are a lot of Chinese speakers in Canada... Would Canada allow (to issue a Chinese press statement)...," says Goh, as the journalist interjects, "Yes they would allow. I am Canadian, I would know." 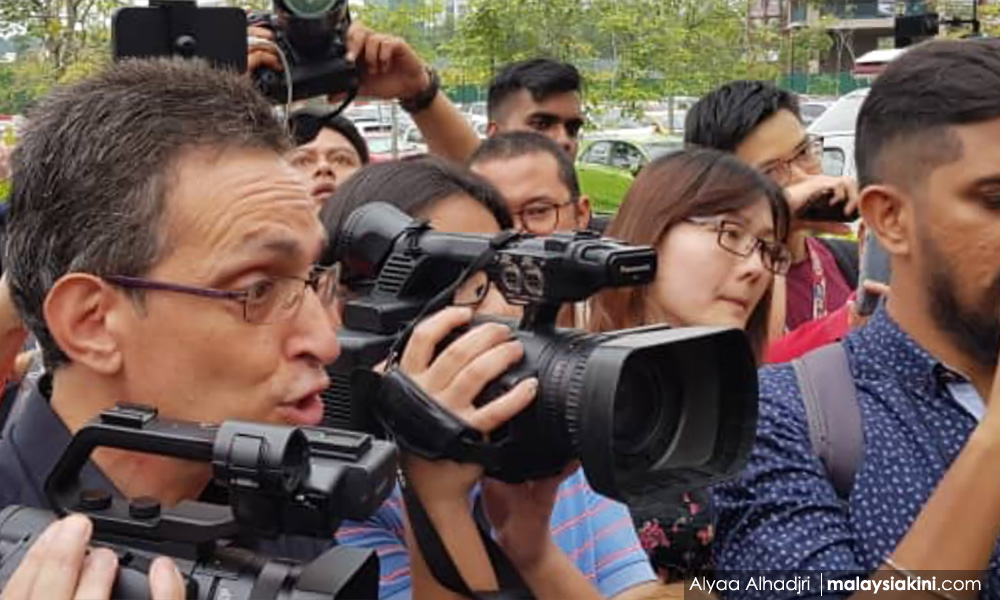 The journalist also points out that a Chinese press statement would only be issued on request, following an official Bahasa Malaysia as well as English versions.

Goh, however, insists that Canada would not appoint an attorney-general who is unable to speak English.

9.26am: Shafee asks whether the prosecution intends to transfer case to the High Court.

DPP Hanafiah requests for all the three charges to be jointly heard in the High Court.

Judge Azura allows the case to be transferred to High Court.

9.20am: DPP Hanafiah says there are three charges against Najib.

They involve Najib receiving a total of RM42 million from SRC International - that between Dec 26, 2014 and Feb 10, 2015, he received RM27 million, RM5 million and RM10 million separately in his AmIslamic Bank account. 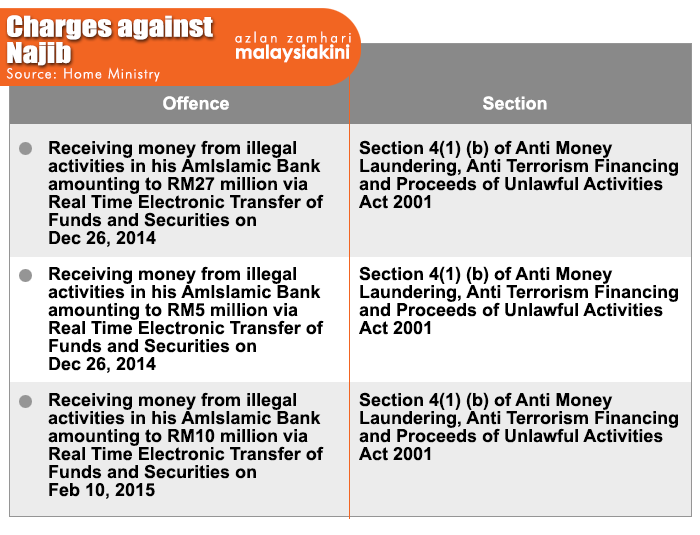 He reads the charges in Bahasa Malaysia. The interpreter appears to stutter when describing the amount and Najib corrects her.

9.17am: Court is called into session with Sessions judge Azura Alwi presiding.

DPP Hanafiah Zakaria introduces his team as well as the defence team.

9.20am: Umno supreme council member Lokman Noor Adam and about 20 of Najib's supporters are prevented from entering the court complex.

Speaking to journalists at the main gate of the complex, Lokman (photo) condemns what he describes as yet another example of Prime Minister Dr Mahathir Mohamad’s “dictatorship”.

He proceeds to present their side of the story in relation to the charges against Najib today.

"The government is desperate to show that they are seen charging Najib.

"This is despite the charges having absolutely no links to their (Harapan's) allegations that Najib had 'stolen' RM2.6 billion...," says Lokman, who also heads the NGO Pemantau Malaysia Baru.

Seen by his side is actress Ellie Suriaty Omar, who has emerged as a staunch Najib supporter.

9.11am: Najib enters the courtroom from the witness room and takes a seat at the accused dock. He wears a grey suit and looks composed.

Also in court are his children, Nooryana Najwa and Noorashman, and son-in-law Daniyar. They are seated at the second row of the public gallery.

The court is about to begin as the interpreter reminds everyone to put phones on silent mode.

9.08am: Najib's defence team is led by Muhammad Shafee Abdullah and his son, Farhan Shafee, and a number of other lawyers, are in the court.

Despite Najib arriving the court complex, he has yet to come into the Sessions Court.

They are here to hold a watching brief for the wife of the former premier.

A number of MACC officials are also present. Lawyer Muhammad Shafee Abdullah and his defence team have yet to arrive.

8.45am: Najib arrives at the Kuala Lumpur court complex in a white Toyota Vellfire.

Seen accompanying him are his children Nooryana Najwa and Noorashman. 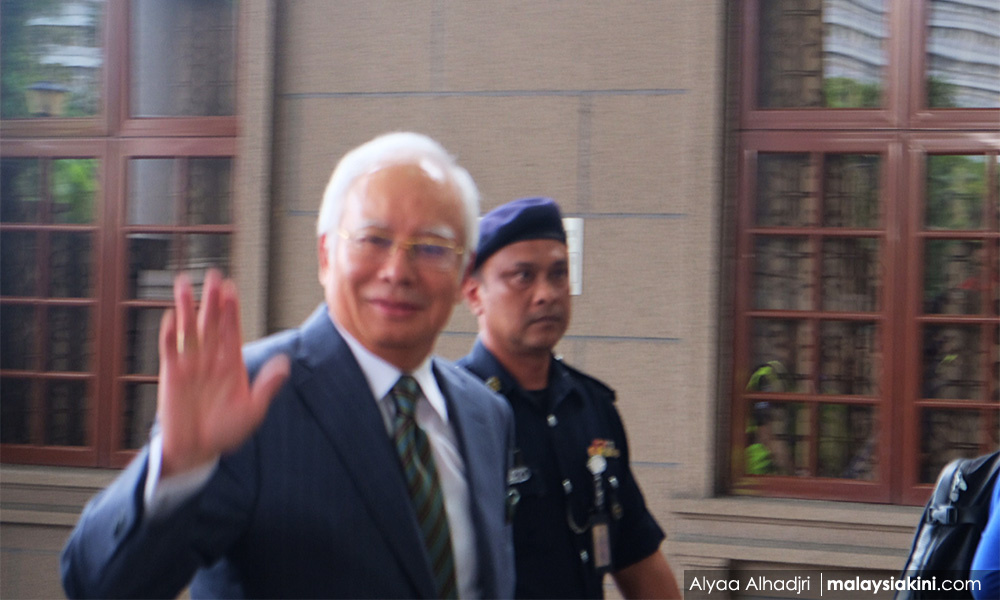 Najib appears calm as he waved to his supporters and media.

He will first go up to the Sessions Court to face additional SRC International-linked charges before taken to the High Court.

8.30am: Outside and around the court complex, the media awaits Najib's arrival.

While Najib's first appearance in court here last month saw the photographers climbing up the pillars to take a better shot, this time, some were seen positioning themselves at a window on the first floor which overlooks the main entrance where Najib will be walking through.

Umno supreme council member Lokman Noor Adam, who lost at the Sungai Kandis by-election on Saturday, is also expected to arrive to hold another solidarity gathering for Najib. 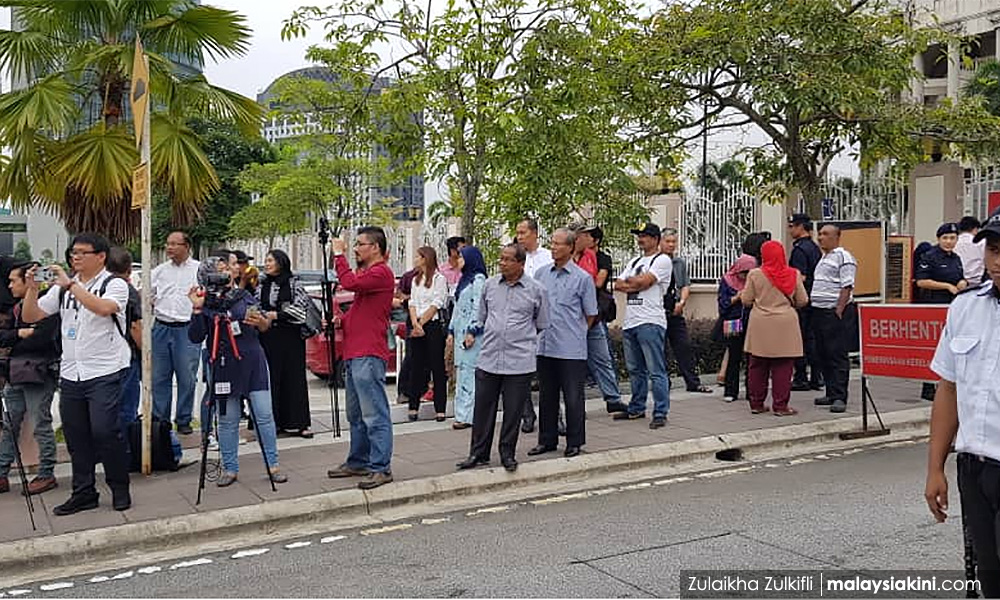 8.05am: Journalists covering the court proceeding are allowed to enter Sessions Court 9.

The judge for Sessions 9 is Azura Alwi.

Reporters and journalists are told to sit at the last two rows of the public gallery in the courtroom.

7.25am: Police begin distributing passes for media personnel. Security is tighter than before as police are giving separate special passes – one to cover the court case and another to cover the press conference.

This is probably to avoid the ruckus in the court complex when Najib was first charged last month.

Najib is expected to be charged at Sessions Court 9 which is located on the second floor of the Kuala Lumpur court complex.

He will then be brought to High Court 3 (criminal).

Najib is expected to be charged at the Sessions Court and it is likely that the prosecution team will ask for the new cases to be transferred to the High Court as in his earlier four charges and for them to be brought before the same presiding judge for a joint trial.

Najib was called to the MACC Academy at Jalan Duta yesterday afternoon where he was informed of the new charges.

Najib had already claimed trial on July 4 at the High Court to three counts for criminal breach of trust and one for abusing his power as finance minister and prime minister in relation to the RM42 million fund under SRC International Sdn Bhd, a former subsidiary of 1MDB.

The three new charges, according to sources, are also in relation to SRC International.

It is also expected that the prosecution team, possibly led by attorney-general Tommy Thomas, will be handing over all related documents on the four charges to Najib's defence team, led by senior lawyer Muhammad Shafee Abdullah.

Following that, the court is expected to fix trial dates for the case.

It is, however, unclear whether the prosecution would address the interim or temporary gag order that was granted by the previous High Court judge.

Najib is the highest ranked Malaysian politician in the country's history to face criminal charges.

Malaysiakini is bringing live the court proceedings inside and outside the court complex.