AG: No conflict of interest if 1MDB gets best shipping lawyers

Attorney-general Tommy Thomas has explained the appointment of a lawyer from his former law firm to the 1MDB legal team to claim the seized superyacht Equanimity.

In a statement today, he described former colleague Sitpah Selvaratnam as one of the country’s leading shipping lawyers with many years of experience chairing the shipping and admiralty law committee of the Bar Council.

“It must be kept in mind that these legal proceedings (on the Equanimity) are brought for the benefit of Malaysia. Accordingly, we are entitled to Malaysia’s best shipping lawyers.

“There is no question of conflict of interest, because we are all on the same side. It is neither right nor sensible for Malaysia to be deprived of the services of Sitpah merely because I was in the firm where she has been a consultant for the past eight years,” Thomas said.

He also said he had personally engaged Sitpah, who in turn will not be paid any fees.

“Her services are rendered to us without any charge to the taxpayer,” he said.

Thomas’ explanation comes after Umno Youth questioned if there was a conflict of interest in how Sitpah, from the firm Tommy Thomas Advocates and Solicitors, was representing 1MDB in its claim on the Equanimity.

Besides Sitpah, the government has also engaged lawyers Jeremy Joseph and Ong Chee Kwan as well as senior federal counsel Alice Loke to represent it in this case. Joseph and Ong will be paid commercial rates,
Thomas said.

The superyacht is presently docked at Port Klang, after it arrived two days ago. 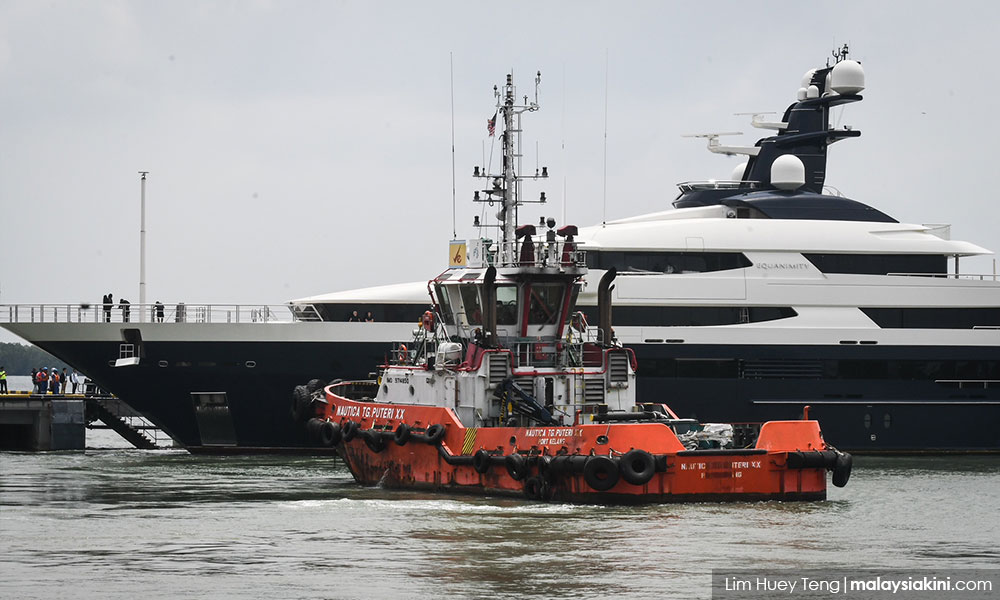 Fugitive businessperson Low Taek Jho is alleged to have purchased the Equanimity for US$250 million (approximately RM1 billion) using funds which US authorities claim was misappropriated from 1MDB.

Aside 1MDB's claim on the yacht, Equanimity (Cayman) Limited has also laid claim to it while the US Department of Justice’s (DoJ) civil forfeiture suit to seize the vessel is still pending.

The DOJ has since moved to suspend its own attempt to seize the Equanimity pending formal inquiries on Malaysia's intentions with the vessel.

Below is Thomas’ statement in full:

When I was informed about two weeks ago that there was a real possibility that the yacht Equanimity would be released by Indonesia to Malaysia, research had to be done quickly to establish Malaysia’s jurisdiction over the yacht when it arrived in our waters. The most effective basis of invoking the court’s jurisdiction is admiralty law or the law of shipping.

A consultant in my former firm, Ms Sitpah Selvaratnam is the acknowledged leader of the Admiralty Bar with regard to litigation matters, having been involved in numerous arrests of ships and vessels in our courts, and also opposing arrests in more than 25 years of specialised practice. She has been the chairperson of the Shipping and Admiralty Law Committee of the Bar Council for many years and is the founding president of the International Malaysian Society of Maritime Law. She is, therefore, the obvious choice to advise chambers and myself on the matter.

As the transactions were intricate and layered corporate deals carried out by Jho Low and advisors to hide the true source of funds used to purchase the yacht, drafting the legal papers required skill and expertise in shipping law and corporate law.

Likewise appearing as counsel before the Admiralty Judge in the Kuala Lumpur High Court where arguments on an ex parte basis lasted almost two hours. Serving the warrant of arrest with the sheriff on the yacht required experience and expertise by lawyers who have actually conducted admiralty arrests.

It must be recalled that the claimants in these court proceedings are the government of Malaysia and its fully owned subsidiary 1MDB, together with two subsidiaries of 1MDB.

Chambers do not have a specialist shipping unit. Accordingly, I decided to turn to the Bar, and chose three of Malaysia’s leading shipping lawyers, Ms Selvaratnam, Mr Jeremy Joseph and Mr Ong Chee Kwan to represent the claimants, along with Ms Alice Loke, senior federal counsel. The solicitors on record are Mr Joseph’s firm, Joseph & Partners.

Because this is a complex litigation, where the stakes are as high as RM1 billion, the law firm of Joseph & Partners, Mr Joseph and Mr Ong will be paid normal commercial rates. Ms Selvaratnam, on the other hand, will not be paid any fees. Her services are rendered to us without any charge to the taxpayer.

It must be kept in mind that these legal proceedings are brought for the benefit of Malaysia. Accordingly, we are entitled to Malaysia’s best shipping lawyers. There is no question of conflict of interest because we are all on the same side. It is neither right nor sensible for Malaysia to be deprived of the services of Ms Selvaratnam merely because I was in the firm where she has been a consultant for the past eight years.

The decision to appoint Ms Selvaratnam was mine, and mine alone, because I have trust and confidence in her ability and integrity. Last weekend, both Ms Selvaratnam and Mr Joseph were approached by foreign parties to act for them in this matter, and they declined.

The real test of Ms Selvaratnam’s experience and expertise would come into play, if and when, Jho Low or any other party applies to set aside the warrant of arrest. The arguments would then be vigorously put forward by all sides when the court hears the matter on its merits, and it is critical that Malaysia has the best barristers.

Litigation is dynamic: unpredictable events occur in court, and Malaysia’s case must be in safe hands.