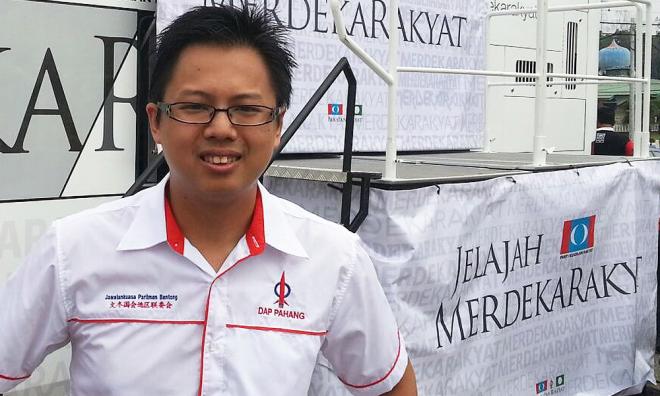 Water, Land and Natural Resources Minister Xavier Jayakumar's recent statement that the controversial Raub gold mine poses no health risks contradicts the very stand Pakatan Harapan once held on the matter, a Pahang assemblyperson has said.

Tras assemblyperson Chow Yu Hui took his fellow Harapan lawmaker to task for the latter's claim made in Dewan Rakyat on Thursday, that there was no scientific evidence to indicate the use of cyanide in gold mining activities at Bukit Koman in Raub, Pahang, was hazardous to nearby residents and the environment.

In a statement today, Chow questioned Xavier's claim on the lack of evidence, saying the experiences detailed by the residents should hold sway with the new government.

"Worse still, there was no buffer zone between the plant and the residential area, apart from a singular road.

"If the gold mining project was not hazardous to the residents' health, then why was there an uneasy smell and some 300 reports from those who felt uneasy, in just a month upon the mining operations beginning. Surely the experiences of the residents are more convincing then official government 'scientific data'," his said.

The mine has been a source of contention for adjacent Kampung Baru Bukit Koman residents since mining company Raub Australia Gold Mining Sdn Bhd (RAGM) began operations in 2007.

The residents claimed that the use of cyanide had badly affected their health causing them to suffer skin rashes, red and watery eyes, throat irritation, shortness of breath, nausea and vomiting, dizziness and others signs of health problems.

The previous government and RAGM, however, have refuted the claims. RAGM had even taken several cases against the Ban Cyanide Action Group (BCAC), and another against Malaysiakini for defamation.

Chow, meanwhile, stated that the residents and BCAC, which was formed to look after the welfare of the residents, had been fighting their cause for over a decade and had supported Pakatan Harapan in the general election.

He added: "However, when the RAGM had finally ceased operations, their comrades in battle, who have now formed the new government, are denying their (the residents') efforts all this while. This is sure heartbreaking for the residents and the committee there.

"I appeal to the Water, Land and Natural Resources Ministry to reinvestigate the case in Bukit Koman and work with the Health Ministry and the Ministry of Energy, Technology, Science, Climate Change and Environment to re-evaluate the data base of the former government on this issue.

"If there is any information which has been hidden or are invalid, it must be immediately corrected for the sake of the Bukit Koman residents."

Chow further requested for officers to be sent to scour the mine site for any toxic waste left behind when the plant ceased operating and to commence immediate clean up if any are found.

Xavier had made the claim when responding to environmentalist-turned-politician Wong Tack (Harapan-Bentong) and Abdul Rahman Mohamad (BN-Lipis) on the health impact of the use of cyanide in gold mining.

The minister, citing a report which he did not name, stated that there was no link to cyanide and skin cancer and that cyanide would evaporate and turn into carbon dioxide, which had no odour.

He further pointed out that the mine has ceased operating, even though the operator still had a valid mining lease for the next three years.

The project, he reportedly said, provided employment opportunities to over a hundred people and contributed an annual RM8 million in royalty to the Pahang government.

Malaysiakini was last month granted leave by the Federal Court to challenge an earlier Court of Appeal decision that its reports on RAGM was defamatory. The appellate court had reversed a High Court decision which had been in favour of the news portal.