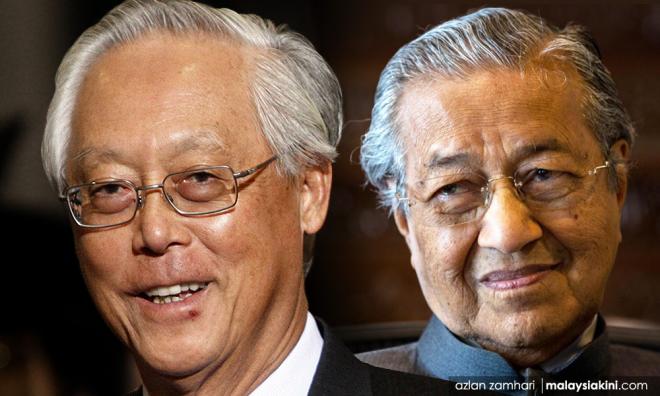 Singapore former Prime Minister Goh Chok Tong says that unlike Malaysia, the island nation is in no need for any former premier to return to its rescue.

According to Singapore's The Straits Times, he said that while it was an "occupational habit" for former premiers to be concerned about the country they held built, he said there that there was no immediate need for him to return to the helm.

Goh, who was Singapore second prime minister and currently holds the post of emeritus senior minister, was referring to Dr Mahathir Mohamad's return to the premiership after leading Pakatan Harapan to electoral victory in the May 9 general election.

He reportedly said many quarters has urged him to attempt the same in Singapore, adding: "They even proposed (former People's Action Party MP) Tan Cheng Bock to be my Anwar Ibrahim."

"(Mahathir) made his comeback at the age of 92. I am only 77. I can wait 15 years," he was quoted saying to laughter from the audience at the annual Marine Parade National Day dinner in Singapore yesterday.

Goh is a member of the ruling People's Action Party. He succeeded Lee Kuan Yew as Prime Minister in 1990 and served to 2014 before being succeeded by Lee's son Hsien Loong.

"It is difficult to let go of the country which you have helped to build.

"If the 5G leaders do not do a good job, I'll be watching," he said, referring to the next generation of Singapore leaders. In his speech, he stated that the country was in the midst of transiting to a fourth generation (4G) leadership.

He was previously reported to have said that Mahathir reminded him Singapore founding father Lee and noted that "whatever happens on one side of the Causeway affects the other".