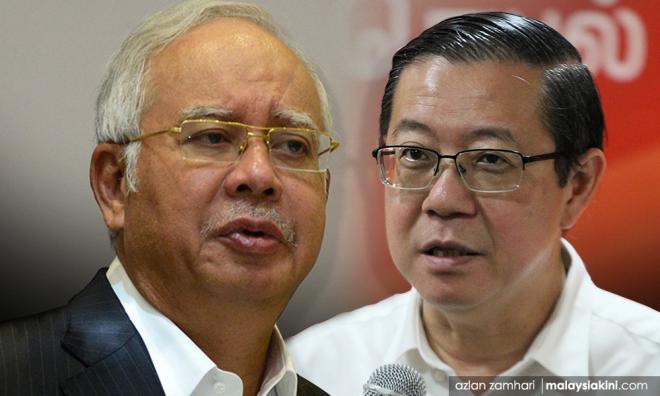 Najib Abdul Razak has questioned the lack of "evidence" supplied by the Pakatan Harapan government over several accusations it levied against the former prime minister relating to the country's finances.

Among them, he said that Finance Minister Lim Guan Eng has yet to revisit an earlier claim that the previous Najib-led administration had left only RM450 million in the unaudited Consolidated Revenue Account as of the end of April.

"I had answered Lim's accusation by providing many reasons why that allegation is impossible.

"Unfortunately, to date, Lim has yet to mention this matter again or respond with more detailed information," Najib said in a Facebook post today.

Two weeks ago, Lim had accused Najib of being "dishonest" for accusing the government of misusing RM42.2 billion in the Consolidated Fund, while leaving it with only RM450 million in the unaudited Consolidated Revenue Account.

The finance minister alleged that his predecessor had failed to explain that of the RM42.2 billion, only RM11.86 billion was in the Consolidated Revenue Account, which in turn could have been transferred to the GST and Tax Refund Trust Account.

Instead of making the transfer, however, Lim said the amount in the Consolidated Revenue Account was found to have "deteriorated" to just RM450 million by April 30, 2018.

Najib previously said this was "impossible", as he claimed the monthly Consolidated Revenue Account balance was never permitted to stray from a sum ranging between RM18 billion and RM20 billion.

He said cash flow management would always ensure there would be enough funds to serve as a two-month "buffer" so as to pay civil servants' salaries and pensions.

In his posting today, Najib said he was also awaiting Lim's response on why no Royal Commission of Inquiry was called to prove the "missing" RM35 billion in GST and tax refunds.

"Furthermore, I am also waiting for him and the Harapan government to furnish proof over repeated claims that the true cost of the East Coast Rail Link project was just RM30 billion.

"Which proposal paper and from which year was this RM30 billion cost stated in?

"Don't simply accuse me to tarnish my name and the former BN government, without any proof," he said.