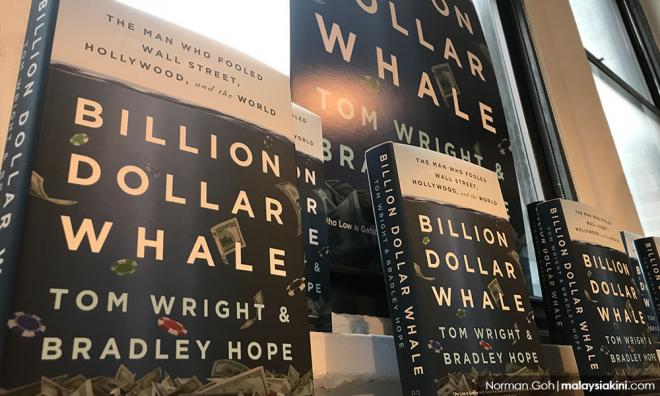 Despite his penchant for surrounding himself with beautiful and famous women, Jho Low craved recognition of his "power and prestige" more than sex, it is claimed in the newly launched book on the fugitive billionaire.

Billion Dollar Whale: The Man Who Fooled Wall Street, Hollywood, and the World, which was launched on Tuesday, fleshes out the details of Low's big spending and lavish partying ways prior to him being wanted in relation to allegedly siphoning off billions of dollars via Malaysia's 1MDB sovereign wealth fund.

The 400-page book, co-authored by The Wall Street Journal reporters Tom Wright and Bradley Hope, claims that Low spent millions of dollars on parties and champagnes, often with celebrities such as hotel heiress Paris Hilton, in tow – he once bought €2 million worth of Cristal champagne in a bidding war at an exclusive club in Saint-Tropez on the French Riviera.

It even details how the financier – wanted in several countries including Malaysia for alleged money-laundering – spent close to US$1 million on just one date with a Taiwanese pop star Elva Hsiao in 2010.

During the date at a luxury Dubai hotel, Atlantis, The Palm, the authors allege Low treated Hsiao to a private beach-side dinner and later presented her with a Chopard gold necklace and pendant with diamonds, purportedly delivered by tuxedo-clad men who parachuted from a hovering helicopter.

"It was a gaudy, laughably clichéd exhibition of love, and as the ostentation piled up, Hsiao wiped a tear from her eye. The event had reportedly cost more than US$1 million to stage, and it was a date, not even a marriage proposal."

All this took place, the authors allege, while Low was in a relationship with Jesselynn Chuan Teik Yin from Penang, whom he would later marry.

"Low often flew her (Chuan) out to the United States... she would be sequestered in a hotel or one of Low’s apartments, accompanied by the other females in his inner circle, women like Catherine Tan, a former Vegas croupier who organised Low’s schedule, and Jasmine Loo, 1MDB’s legal counsel.

"While Low treated her respectfully in public, he was also in the habit of making gifts of luxury cars and jewellery to other women, and paying for models to mill around at parties in hotel suites, clubs, and on yachts," the book details.

Even so, the book further states that the businessperson, whose real name is Low Taek Jho, was "torn by the duplicity in his life", between his then-girlfriend and other women.

It states: "But he wasn’t a typical playboy. Some of the models whom Low regaled with Cartier jewellery or gambling chips were astonished he never hit on them. Far more than sex, it seemed, he craved recognition, whether from women or Hollywood stars, and he sought to create spectacles that reinforced his power and prestige."

The authors also allege that as of February 2017, once becoming the subject of multiple investigations, Low kept his family, comprising Chuan and their young son, bound to the Equanimity superyacht as well as apartments and hotels in Thailand and China in order to evade possible arrest.

It states: "Fearing arrest if he set foot in any Western country, he was living on the boat and in service apartments at St Regis in Bangkok and Pacific Place in Hong Kong.

"Thailand, ruled by a military junta, was a safe harbour for Low. China, meanwhile, saw him as a strategic asset – a pawn who gave Beijing influence over (former Malaysian prime minister) Najib. He still had access to copious amounts of cash. It was a comfortable existence, if isolated.

"Now married to Jesselynn Chuan Teik Ying and with a two-month-old baby boy, Low kept his new family hidden. He forced Chuan to remain for days on the boat or at the apartments, leaving only for shopping trips or endless Chinese meals in malls."

Low, who has constantly denied all allegations levied against him, has reportedly tried to block the distribution of the Billion Dollar Whale by sending threatening letters to bookshops around the world.

During the launch of the book in New York, authors Wright and Hope had quipped that they should be "thanking" Low, as his attempt to stifle the coverage only served to publicise the book further.

For WSJ writers, 'Save Malaysia' was no mere opposition slogan