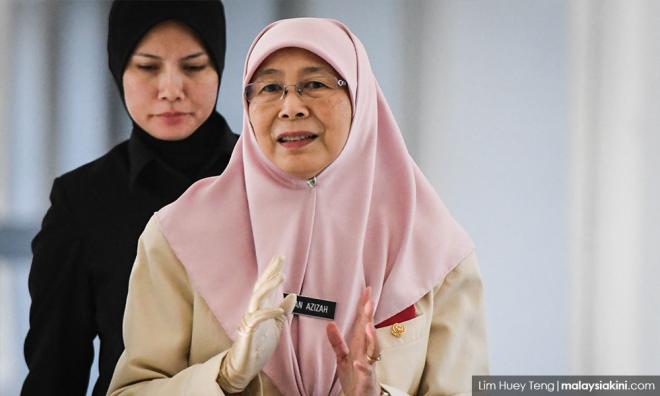 Yoursay: If Wan Azizah can't get rid of child marriage, forget about 'reformasi'

YOURSAY | ‘The DPM is waffling over this issue. A child cannot be made to marry. Full stop.’

No decent parent would or should ever agree to a 15-year-old daughter’s request for marriage. A 15-year-old child should be in school. Lawyers for Liberty (LFL) director Latheefa Koya is right.

The Penal Code is clear on statutory rape: “Consent is irrelevant in statutory rape”. Such a lame excuse by Wan Azizah is unacceptable. As a minister responsible for community welfare, Wan Azizah has proven more than once that she is unfit to lead, let alone do something.

There is nothing religious about this. We are in the era of information technology. Such thinking and decisions are incompatible with what we aspire for.

Anonymous_3e12: Wasn't it reported that the 15-year-old bride possibly ran away from her husband at some point? She might have "consented," but it could have been under duress.

This child bride came from a poor family of 13 children. Has Malaysia not done any family planning, and since we are the producer of rubber condoms, why are the parents still having so many children and falling into the poverty trap?

It is absolutely disgusting that PAS and Umno in their war cry of protecting their race and religion did not do enough to eradicate poverty so that young girls need not be sold off to leery old men, in other words, paedophiles.

I seriously doubt the deputy prime minister is capable of holding any position requiring rational thought.

Apa Fasal?: Wan Azizah, you have verbally violated the inherent rights of a child to remain a child, and not a bride. Seriously, I'm most ashamed of your ministry on this issue.

RZee: Indeed, Latheefa is absolutely right. The deputy prime minister is waffling over this issue. A child cannot be made to marry. Full stop.

Only in Islam does this happen and is allowed to happen. And then PAS and other Muslims express shock and pretend surprise as to why there is Islamophobia around the world. And it's for reasons like this.

Anonymous: Why are all of you barking up the wrong tree? The sultan is the head of Islam in his own state.

If he agrees to the legislation on child marriage, which needs the approval of the Syariah Court, then blame the sultan, not the deputy prime minister.

Anon: The Syariah Court has jurisdiction over marriage, divorce, inheritance, etc, of Muslims. If the marriage complies with the rules set by the Syariah Court, then it is legal.

Please note the groom asked for permission and it was granted. If the law is disagreeable, then by all means amend the law – the Kelantan sultan can do it, as the Selangor sultan has done so and raised the age of marriage to 18.

Probably the state mufti, religious department, state and federal government can give their input. As of today, the law stands. And the marriage is valid.

TC Chan: All we need is for all the sultans do what Selangor has done, raise the marriage age to 18. The question is, why don't they do it?

You have Johor warning people to stay out of Islamic matters as it is a state matter. The state's respective MBs should advise their rulers that child marriage is paedophilia and statutory rape, and gives the religion a bad name.

Anonymous #20099632: Wan Azizah, if you can’t resolve this issue, don’t ever mention Reformasi in public. I don’t know about you, but I feel ashamed as I am a Pakatan Harapan supporter.

Underage Muslim girls deserve to be protected by the law, too

RakyatBiasa: I wonder if Wan Azizah would allow her 15-year-old granddaughter to marry a 44-year-old man if both were mutually in love.

She is neither fit to be deputy prime minister nor minister for women affairs when she can't even speak up and protect the rights of children.

She should step down as minister if her focus is to get her husband to be MP and PM.

Patathewoonie: 'RakyatBiasa', don't just read one part of the report and not the other part. Don't you know the current syariah law condones underage marriage?

Didn't Wan Azizah say she is pressing to increase the legal marriage age to 18? She is against underage marriage, didn't you read?

Fairplayer: Yes, children deserve to be protected by the law. Selangor Wanita DAP deputy chairperson Sangeet Kaur Deo has hit the nail on its head.

Fair Play: The sultan is the head of Islam of his respective state. So far, only the Selangor sultan had decreed that the minimum age of marriage for Muslim women is 18, and directed the state religious department to amend the law accordingly.

Wan Azizah as a cabinet minister has no jurisdiction over Islamic matters. I don’t understand why the Anwar family is blamed for all wrongs. I live in Johor, and have never heard of underage Muslim girls getting married by force.

Now we should ask ourselves, why is it happening only in Kelantan and Terengganu? We should try to engage our brain once in a while.