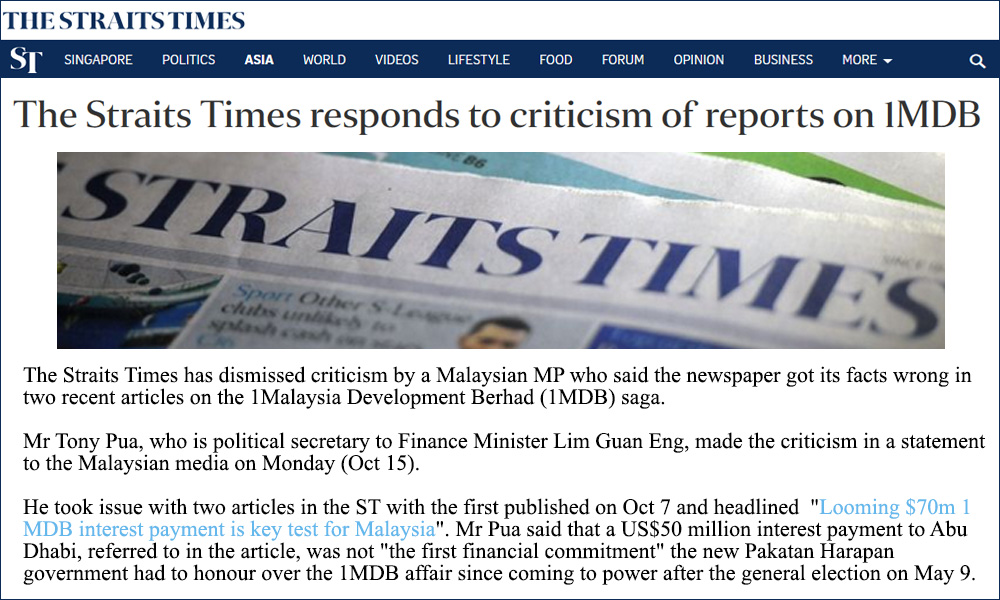 Singapore's The Straits Times has defended its reports on 1MDB against criticism thrown by Tony Pua.

In a statement published last night, it dismissed the criticism, where the political secretary to Finance Minister Lim Guan Eng had accused the daily of getting its facts wrong in two recent articles published on Oct 7 and Oct 14.

Pua had on Monday chided the daily for what he described as its "persistent misreporting” on 1MDB matters, over the articles titled "Looming $70m 1MDB interest payment is key test for Malaysia" and "Malaysia's 1MDB Debt to Abu Dhabi may have ballooned".

He disputed Straits Times' claim in the Oct 7 article that the Pakatan Harapan government had set a “dangerous precedent” by paying 1MDB financial obligations inherited by the previous BN government, saying that the government did not have a choice "but to fulfil our commitments for the bonds".

To this, the daily said its regional correspondent Leslie Lopez, who wrote both the reports, noted that the October payment was the first to be paid out under the 1MDB settlement agreement the previous government had signed with Abu Dhabi to avoid a potentially damaging arbitration process.

"The settlement agreement, which required Malaysia to make payments amounting to US$1.2 billion in two separate instalments in the second half of 2017, also called for milestone payments between April 2017 and October 2022.

"Mr Lopez said the payment schedule seen by Straits Times showed that the last charge of US$52.41 million fell due on May 7, two days before the country's historic general election. The Oct 15 payment thus represents the first obligation of the new government under the settlement agreement," said the statement.

On the Oct 14 article, Pua had said that he disagreed to the daily's reading of an Oct 1 filing at the London Stock Exchange, in which International Petroleum Investment Company (IPIC) announced a move to transfer 1MDB-related liabilities and commitments to its parent company, Mubadala Development Co PJSC (Mubadala).

Lopez said the Malaysian government lawyers remain in the dark about the settlement agreement between 1MDB and Abu Dhabi because they are unable to source documentation related to the deal.

"The London lawyers appointed by the Malaysian government have been instructed to look into the possibility that the notes cited in the IPIC announcement could be tied to 1MDB," Lopez said.

Straits Times editor Warren Fernandez was also quoted in the statement, as saying that the daily stood by its reporter and the reports filed "as these were based on documents and information from highly placed and reliable sources".