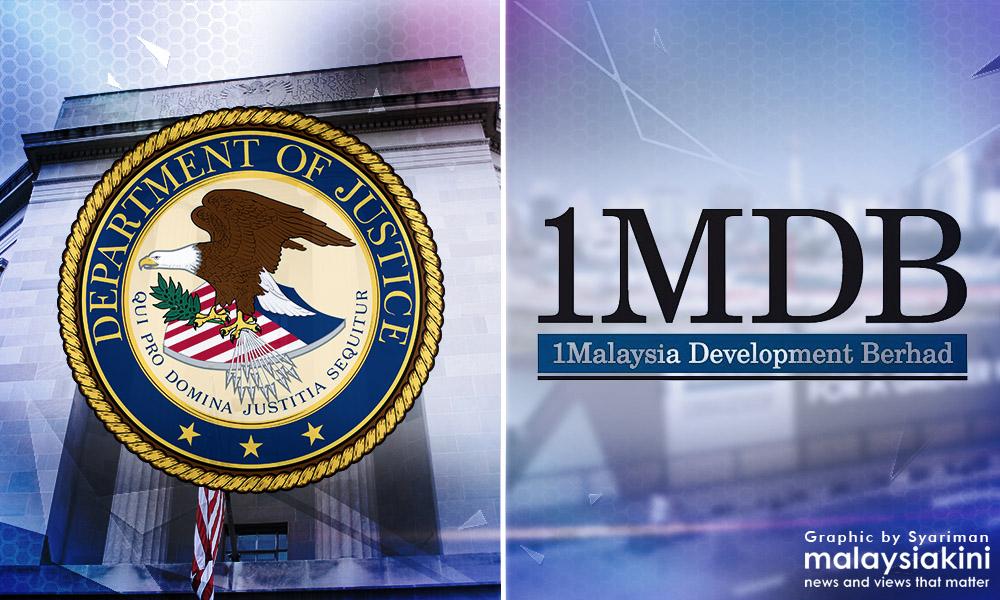 Below is their statement in full:

As part of the three-count indictment, Ng is also charged with conspiring to violate the FCPA by circumventing the internal accounting controls of a major New York-headquartered financial institution (Financial Institution), which underwrote more than $6 billion in bonds issued by 1MDB in three separate bond offerings in 2012 and 2013, while Ng was employed at the Financial Institution as a managing director.

Ng was arrested earlier today in Malaysia, pursuant to a provisional arrest warrant issued at the request of the United States. Low remains at large.

Also unsealed today in federal court in the Eastern District of New York was the guilty plea of Tim Leissner, 48, the former Southeast Asia Chairman and participating managing director of the Financial Institution, to a two-count criminal information charging Leissner with conspiring to launder money and conspiring to violate the FCPA by both paying bribes to various Malaysian and Abu Dhabi officials and circumventing the internal accounting controls of the Financial Institution while he was employed by it. According to court filings, Leissner has been ordered to forfeit $43.7 million as a result of his crimes.

1MDB is a Malaysian state-owned and controlled fund created to pursue investment and development projects for the economic benefit of Malaysia and its people. As alleged in court filings, between approximately 2009 and 2014, as 1MDB raised money to fund its projects, billions of dollars were misappropriated and fraudulently diverted from 1MDB, including funds 1MDB raised in 2012 and 2013 through three bond transactions that it executed with the Financial Institution.

As part of the scheme, and as alleged in court filings, Low, Ng, Leissner, and others conspired to bribe government officials in Malaysia, including at 1MDB, and Abu Dhabi to obtain and retain lucrative business for the Financial Institution, including the 2012 and 2013 bond deals. They also allegedly conspired to launder the proceeds of their criminal conduct through the US financial system by purchasing, among other things, luxury residential real estate in New York City and elsewhere, and artwork from a New York-based auction house, and by funding major Hollywood films.

At the same time, Ng, Leissner and others allegedly received large bonuses and enhanced their own reputations at the Financial Institution. In total, according to allegations in court filings, more than US$2.7 billion was misappropriated from 1MDB and Low, Ng, Leissner and others conspired to launder this money through the U.S. financial system to pay bribes to foreign officials and for the personal benefit of themselves and their relatives.

In early 2012, according to allegations in court filings, following a series of meetings in Malaysia and the UK, Low, Leissner, Ng and the co-conspirators agreed that, with the assistance of the Financial Institution, 1MDB would issue $1.75 billion in bonds guaranteed by an entity wholly-owned and controlled by the government of Abu Dhabi. Low allegedly explained to Ng, Leissner, and others at the time that, to complete the transaction, bribes would need to be paid to officials in Malaysia and Abu Dhabi and hundreds of millions of dollars were allegedly paid to officials in these countries.

Court filings also allege that Low, Ng, Leissner, and other co-conspirators knew that Low intended to use funds misappropriated from the bond transaction to bribe and influence the officials to obtain the necessary approvals and any additional assistance to execute Project Magnolia for the Financial Institution and to pay kickbacks to Ng, Leissner, and others.

In or around March 2012, 1MDB allegedly selected the Financial Institution to be the sole bookrunner and arranger for Project Magnolia. As part of the scheme, Low and other co-conspirators allegedly enlisted the assistance of 1MDB officials, promising to pay them bribes and kickbacks. In one instance, as alleged in court filings, in connection with Project Magnolia, Low told one 1MDB official that he would “[g]ive [the official a] big present” when the transaction closed. According to allegations in court documents, the fact that bribes and kickbacks were being paid in connection with Project Magnolia was known to Ng, Leissner, and other employees of the Financial Institution.

After Project Magnolia closed on or about May 21, 2012, more than $500 million of the bond proceeds were allegedly misappropriated and diverted from 1MDB through numerous wire transfers to bank accounts in the name of shell companies beneficially owned and controlled by Low, Leissner, Ng, and other co-conspirators, including a high-level official at the Abu Dhabi entity that guaranteed the Project Magnolia bonds and a close relative of Malaysian Official #1. As alleged, the bond proceeds transferred to Malaysian Official #1’s close relative were later used by the relative’s U.S. motion picture company to assist in the production of the film “The Wolf of Wall Street.”

Court filings further allege that from May 2012 and continuing through 2013, Low, Ng, Leissner, and their co-conspirators continued to work to ensure that the Financial Institution obtained and retained additional 1MDB business, including the bond transactions known as “Project Maximus” and “Project Catalyse,” which transactions generated substantial fees and revenues for the Financial Institution.

As alleged, although both transactions were designed to raise more than US$4 billion for 1MDB’s investment and development projects, Low, Ng, Leissner, and other co-conspirators used the transactions to further the criminal scheme, ultimately laundering hundreds of millions of dollars of diverted funds from these transactions into bank accounts beneficially owned and controlled by, among others, the co-conspirators, including Low, Leissner and officials in Malaysia and Abu Dhabi. As alleged in court filings, throughout this time, Ng, Leissner, and at least one other employee of the Financial Institution knew that Low would and did pay bribes to influence officials in Malaysia and Abu Dhabi to obtain the necessary approvals to execute Project Maximus and Project Catalyse.

Low, Ng, Leissner, and others also allegedly knew that large portions of the bond proceeds would be illegally diverted to themselves and others, including to foreign government officials.

As part of the scheme alleged in court filings, Low, Ng, Leissner and other co-conspirators again used a series of wire transfers to launder billions of dollars of misappropriated and fraudulently diverted funds from Project Maximus and Project Catalyse. Following the close of Project Maximus, approximately US$790 million of the bond proceeds was allegedly transferred through a series of shell company accounts beneficially owned and controlled by Low, Leissner and others, including accounts of officials in Malaysia and Abu Dhabi.

In particular, Leissner and Ng allegedly caused millions of dollars of these funds to be transferred to accounts of 1MDB officials or relatives of such officials in exchange for their assistance in obtaining and retaining business for the Financial Institution.Over US$35 million of the bond proceeds also allegedly was used by a co-conspirator to help acquire a condominium in New York, New York beneficially owned by Low.

Similarly, according to allegations in court filings, after Project Catalyse closed in March 2013, more than US$1 billion of diverted funds, traceable to the transaction, were laundered, at Low’s direction, to bank accounts in the name of entities beneficially owned and controlled by Low, Leissner, and others, including 1MDB officials. As alleged, more than US$4 million of the funds were transferred to a bank account beneficially owned by a relative of Ng.

Additionally, as part of the scheme, Low allegedly used a shell company account to receive more than US$1 billion of the Project Catalyze bond proceeds and spent approximately US$137 million of these funds to purchase works of art at a high-end art auction house in New York, New York.

For example, as alleged, in an online chat between Low and Leissner in June 2014, Low and Leissner discussed the need to “suck up to” a 1MDB official and to send “cakes” to a person believed to be the wife of Malaysian Official #1. A few months after this chat, a bank account owned and controlled by Leissner and his relative was used to transfer approximately US$4.1 million to a high-end New York jeweller, in part, to pay for gold jewellery for the wife of Malaysian Official #1.

The charges in the indictment as to Low and Ng are merely allegations, and those defendants are presumed innocent until proven guilty beyond a reasonable doubt in a court of law.

The investigation was jointly conducted by the FBI’s International Corruption Unit and IRS-CI. The government’s criminal case is being handled by the Criminal Division’s Money Laundering and Asset Recovery Section (MLARS) and Fraud Section and the Business and Securities Fraud Section of the US Attorney’s Office for the Eastern District of New York. MLARS Trial Attorneys Jennifer . Ambuehl, Woo S Lee, and Mary Ann McCarthy, Fraud Section Trial Attorneys Katherine A Nielsen and Nikhila Raj, and Assistant U.S. Attorneys Jacquelyn M Kasulis and Drew Rolle of the Eastern District of New York are prosecuting the case.

Additional Criminal Division Trial Attorneys and Assistant US Attorneys within US Attorney’s Offices for the Eastern District of New York and Central District of California have provided valuable assistance with various aspects of this investigation, including with civil and criminal forfeitures.

The Criminal Division’s Office of International Affairs provided critical assistance in this case. The Department also appreciates the significant cooperation and assistance provided by the US Securities and Exchange Commission and the Board of Governors of the Federal Reserve System along with the Federal Reserve Bank of New York.

The International Unit of the Criminal Division’s MLARS is home to the Kleptocracy Asset Recovery Initiative - a team of dedicated prosecutors working to prosecute individuals and forfeit the proceeds of foreign official corruption that has affected the US financial system and, where appropriate, return those proceeds to benefit the people harmed by these acts of corruption and abuse of office. MLARS’s Bank Integrity Unit investigates and prosecutes banks and other financial institutions, including their officers, managers, and employees, whose actions threaten the integrity of the individual institution or the wider financial system.

The Criminal Division’s Fraud Section is responsible for investigating and prosecuting all FCPA matters. Additional information about the Justice Department’s FCPA enforcement efforts can be found here.