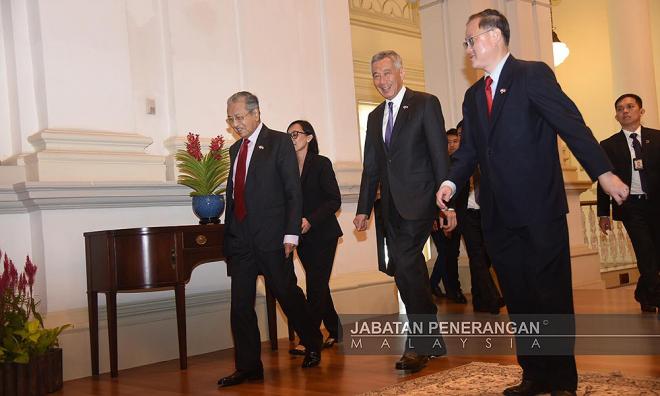 Singapore and Malaysia have expressed their willingness to have further discussions to better understand each other’s position on the 1962 Water Agreement, according to the republic’s Ministry of Foreign Affairs (MFA).

The Ministry said this in response to media queries on discussions between Singapore Prime Minister Lee Hsien Loong and his Malaysian counterpart Dr Mahathir Mohamad yesterday.

“Both sides expressed their differing views on the right to review the price of water under the 1962 Water Agreement,” the Ministry’s spokesperson said in a statement late Monday.

Earlier Monday, Mahathir revealed that the 1962 Water Agreement was one of the matters that was raised during the bilateral meeting between him and Lee.

“We raised some of the issues in the past which were regarded as controversial,” Dr Mahathir said to a group of Malaysian media on Monday.

“I thought I have to state our stand on it. I think by and large, he (Lee) was quite accommodating. He listened to my views and I think he is much open to discuss these things than before… before they just rejected all efforts at renegotiating,” he said.

When asked further whether Singapore agreed to revise the current price, Mahathir said: “They didn’t say they agree but at least they appear to be willing to state their case and for us to state our case.”

As to what will be the next step, Mahathir said that some officials (from both countries) will meet and discuss (the matter).

The bilateral talks were the first between the two leaders. It was held at The Istana in Singapore on Monday.

Singapore’s MFA noted that both leaders had a wide-ranging discussion on bilateral and regional issues during their meeting.