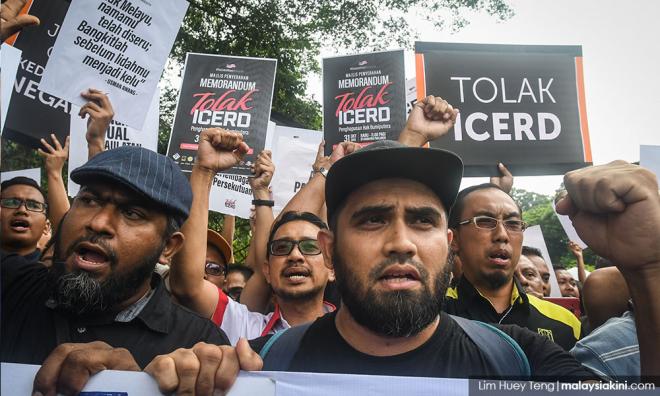 Anti-Icerd drive is about defending Malay ‘privileges’, not rights

YOURSAY | The ‘privileges’ have since evolved into ‘rights’.

BuatApa: I think the debate on Icerd (International Convention on the Elimination of All Forms of Racial Discrimination), Pakatan Harapan's wild claim about creating a new Malaysia whilst straddling old Malaysia for obvious reasons (look at who's in charge) would have made things abundantly clear that both Harapan and Dr Mahathir Mohamad are makeovers of Umno-BN who will hold on to Malay supremacy elements of the racist regimes dating back to 1957, especially 1969, and the 22 years of which Mahathir engineered.

The Malays have already claimed Malaysia is for Malays and see everybody else as “pendatang” and nothing more. Mahathir, and I am certain Anwar, too, will cement the Malay rights agenda to the hilt lest they want their rumps kicked from here to Saudi Arabia.

Please, let's stop deceiving ourselves. Let's stop the stupid pretence that Malaysia can and will undergo fundamental reforms and attitudinal change in respect of race and religion.

The old order is firmly rooted in place, and Mahathir is the last of the Malays who will lift his little finger to change the status quo. But feel free to continue to hallucinate and deceive yourselves about the false dawn since May 9, 2018.

I think we should quit being politically correct and stand up to what we believe should be the guiding light for all Malaysians: Article 8 of the Federal Constitution which screams "equality".

Article 153 and Article 136 are at loggerheads with Article 8. Yet nobody is seeing the pink elephant in the room.

Race, religion, region and language will always assume the leading edge, while others not included in the "special position" category are tethered to the bleeding edge.

Anonymous_9465aabe: With all due respect, Malaysiakini columnist S Thayaparan, the correct word to use should be “privileges”, not rights.

No one can take away one’s rights, but a special privilege is to be granted (by a magnanimous party, no less) and can be withdrawn.

Save our currency: Put privileges of Malays together with legitimate rights of other races – Icerd will be no issue. It doesn’t mean where there are privileges, others won’t get any. The non-privileged are no threat at all, so why threaten them?

The beauty of Icerd is, there will be no hoodwinking and hijacking of privileges by a select few. The transparency will help to ensure that privileges are accorded where they belong, irrespective of race.

This is where the rakyat comes in to check leaders who mislead and threaten for self-enrichment.

Existential: I was never more disappointed and disheartened than when Umno-BN was in power. Emigrating is now constantly on my mind.

People had to figuratively move mountains to elect this Harapan government. Yet, the leaders have proven that they are either unwilling or too scared to even move a pebble.

For all the lionisation heaped on them before GE14, they are collectively cowards compared to Minister of National Unity and Social Wellbeing P Waythamoorthy. You never see hesitation from PAS or Umno leaders even when they spew moronic or racist statements.

Pro-Justice: As someone said, Finance Minister Lim Guan Eng and the majority in DAP won't even lift a finger to help another in DAP (for example, in Penang DCM Prof P Ramasamy's feud with the radical Perlis mufti, Mohd Asri Zainul Abidin). So it is not strange when Lim distances himself from Icerd and says it’s Waythamoorthy's problem.

Anyway, the PKR, DAP and Amanah MPs and ministers could not care less for the electorate who voted for change and a new Malaysia.

Keep exposing the filth and hidden agenda of Harapan and hope they realise they could be one-term wonders if they do not heed the sentiments of the voters.

VP Biden: Very disappointing indeed. Understandably, Harapan leaders do not want to spook their vote bank but at the same time, they need to advocate what is right and beneficial to the country in the long run and have a plan in place to implement this gradually.

The Commander (Thayaparan) is right: No Malay politician wants to touch this for obvious reasons. Where is the politician who will show a roadmap on how this can be implemented?

The politician who spells out the policies needed and the outcomes it will achieve will have more respect across the board from the Malaysian populace except from the 3R (race, religion, royalty) proponents who possibly form 20 percent.

That politician unfortunately and possibly can only come from the next echelon of Harapan leaders who are in their 30s and 40s.

The Wakandan: I believe this is a Malay issue and therefore it’s not Waythamoorthy or Lim Guan Eng who should answer this question. Why them? They have no problem with Icerd.

The people who should articulate this should be Mahathir, Anwar, Azmin Ali, Dr Wan Azizah Wan Ismail, Muhyiddin Yassin, Syed Saddiq Syed Abdul Rahman, Maszlee Malik and the rest of the Malay leaders in Harapan.

Apparently, they had said their piece and none wanted to categorically ratify Icerd. Mahathir was flip-flopping. So, why is there no political courage from Harapan’s Malay leaders on this issue?

Thayaparan said it diplomatically – they have no scrotal fortitude. When our leaders become spineless on this test, we cannot really expect much. Going back to the square one is a big possibility. Again.

Kutan: This alone is enough to tell any thinking citizen that this is no "new Malaysia". Such a shame, such a betrayal of the hopes of millions.