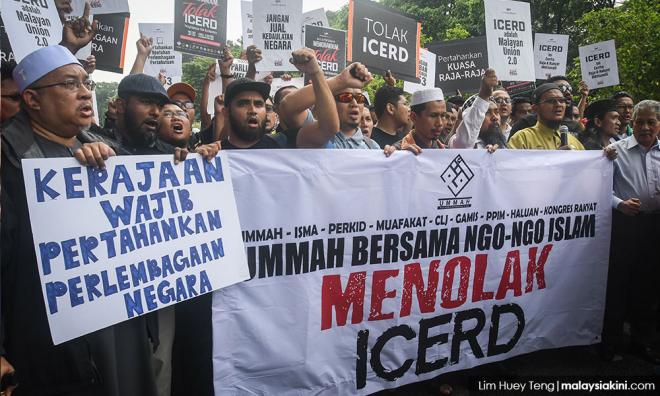 Not ratifying Icerd: A step backwards for New Malaysia

COMMENT | We, the undersigned civil society organisations, are disappointed by the escalation of the reactions that have led to Pakatan Harapan’s announcement to call off the accession to the International Convention on the Elimination of All Forms of Racial Discrimination (Icerd).

Harapan’s mismanagement of the issue and the lack of a unified front to counter the myths and misconceptions made by the opposers of Icerd have led to the rise and the escalation of the issue.

The announcement by the Prime Minister’s Office to not ratify the Icerd is a step backwards for the new Malaysia.

After promising the people and international audiences at the United Nations General Assembly and the recent Universal Periodic Review to create a Malaysia that is inclusive, moderate and respected globally, the Pakatan Harapan government has fallen to the call of Icerd dissenters.

We hope that this is only a step back to reflect on the way forward that will bring all parties to the table to move forward with the eventual ratification of Icerd.

We reiterate that the ratification of Icerd brings many benefits to the nation and the people. It is essential for the promotion of an inclusive, harmonious, progressive, prosperous, just and equitable nation, free from any forms of racial discrimination. This is in line with Pillar Five of Pakatan Harapan’s manifesto which is aimed at creating a Malaysia that is inclusive, moderate and respected globally.

Icerd not only helps a government enact policies against racism but also promotes understanding and empathy among races. In our context, it is the aspirational vision of Bangsa Malaysia.

Myths and misconceptions about Icerd

Unfortunately, myths and misconceptions overshadowed the benefits of this human rights instrument.

Firstly, Icerd is in congruence with not only Islam but many religions and teachings. Many were led to believe that ratifying Icerd would undermine the position of Islam.

In fact, the Prophet Muhammad denounced racism. The prophet’s last sermon (Khutbatul Wada’) at Mount Arafat emphasised that Islam is fundamentally against any forms of racial discrimination, regardless of whether people are Muslims or not.

This is also reflected by the fact that most of the Muslim-majority countries of the world, including Organisation of Islamic Cooperation (OIC) countries such as Jordan, Palestine and Saudi Arabia have ratified the Icerd. The primary institutional objective of Icerd as stated in Article 11 (a) of the OIC Charter 1972 is to eliminate “racial segregation and discrimination”.

Secondly, Icerd and the Malaysian Federal Constitution are compatible with one another. Many are under the misconception that if Malaysia were to ratify Icerd, Article 153 would have to be removed once it has achieved its intended objectives. In fact, Article 153 is not inconsistent with the aims of Icerd as Articles 1(4) and 2(2) of Icerd seek to bring about effective or substantive equality, and not merely formal or superficial equality.

Temporary special measures of this nature, in which Article 153 was drafted, are not in direct conflict with the provisions of Icerd. It is only when the provisions of Article 153 are (mis)interpreted as permanently entrenching “Malay rights” or “bumiputera rights” would it be inconsistent with the aims of Icerd. Only once the communities which have been left behind enjoy their equal rights, would Article 153 have been considered to have met its intended objectives.

Thirdly, Icerd does not undermine the power of the Yang di-Pertuan Agong and the Sultans. People have been led to believe that Icerd would undermine the powers of the monarchs. In fact, Icerd recognises the concept of ‘substantive equality’ in Article 2(2) where, in appropriate situations, the government can take special and concrete measures to ensure adequate development and protection of certain racial groups or individuals; hence the integrity of the Federal Constitution, the Yang di-Pertuan Agong and the Sultans are protected.

As everyday people, we must push back against racism and extremism. We must not let the voices of bigots and extremists to continue to dominate, instigate and propagate fear.

Icerd strives to eliminate racial discrimination. The accession to Icerd is in line with the spirit and the fundamental principles enshrined in the Malaysian Federal Constitution. It is essential for us to step up and counter the misinformation spread by the dissenters of Icerd.

We urge the Pakatan Harapan government to stay true to the course of its reform agenda and deliver its promises of a New Malaysia, as stated in its manifesto.

In line with the Sustainable Development Goals of leaving no one behind, it is imperative for the Harapan government not to be overpowered by dissidents and stick to its commitments to ensuring equality, non-discrimination and justice for all.

It is now time for the New Malaysia to commit itself to the promises of its manifesto to build a nation that is inclusive, moderate and respected globally.

This statement is endorsed by the following organisations:

Government's U-turn on Icerd 'appalling', says Surendran
23 Nov 2018
Prove that Malaysia is not racist by signing Icerd
23 Nov 2018
Is the anti-Icerd protest a catalyst to stage riots in the country?
23 Nov 2018
Anti-Icerd drive is about defending Malay ‘privileges’, not rights
23 Nov 2018