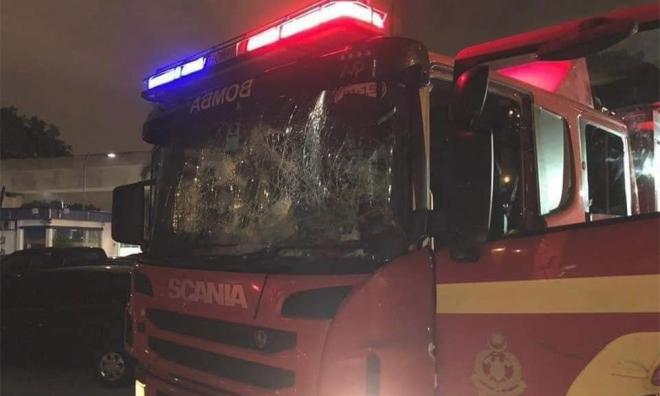 A Fire and Rescue Services Department personnel was critically injured after being attacked by the mob who gathered near the Sri Maha Mariamman temple in USJ25, Subang Jaya, early this morning.

Muhammad Adib Mohd Kassim, 24, is currently warded at the intensive care unit of a private hospital in Subang Jaya.

It is understood that his family members and fiancée are currently at the hospital with him.

Later, the department’s director-general Mohammad Hamdan Wahid paid Adib a visit and told the media about the latter’s condition.

“He has bruises all over, on his abdomen and his chest. We suspect that (the blows he sustained) fractured ribs, punctured his lungs and affected his intestines.

“He is still on life support,” he said.

Adib had been in a van when a mob began to throw stones at the vehicle, breaking the windows, side mirrors and doors.

It was during the melee that he was dragged out of the vehicle and assaulted.

In the midst of the chaos, Adib's partner drove off without realising that he was not in the vehicle with him.

Five specialist doctors are currently attending to Adib, who is now in the intensive care unit.

Fire and Rescue Department personnel were seen reciting Yasin prayers for Adib at the hospital.

The 24-year-old Adib is from Kedah and was supposed to be married next month.

Meanwhile, Selangor Menteri Besar Amirudin Shari, who was also at the hospital, said he was very saddened by the incident.

He said the state government will be taking care of Adib's medical bills.

Last night, Malaysiakini witnessed rescuers being attacked while they were approaching a vehicle that had been set on fire near the temple.

Rioters set fire to vehicles near the temple last night before attacking the MCT Bhd office nearby.

MCT is the construction company that formerly owned One City Sdn Bhd, the current owner of the land on which the temple is located.

'Adib was dragged out of van, beaten by temple riot mob'

You're strong, wake up – fiancée's message to assaulted fireman