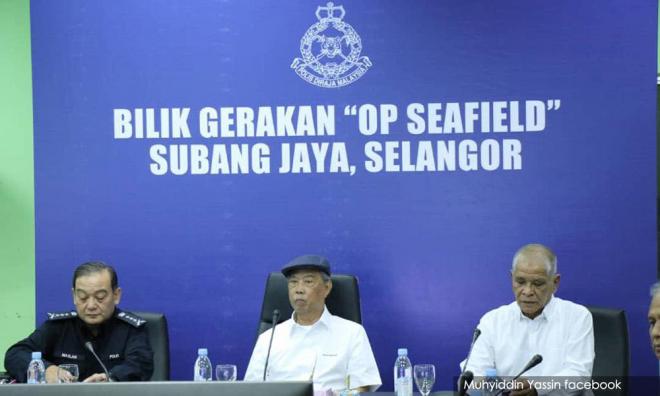 Home Minister Muhyiddin Yassin today said the cabinet has granted an exemption in the use of the Sedition Act 1948 in relation to the Sri Maha Mariamman Temple riots in Seafield, Subang Jaya.

He noted that the cabinet had previously imposed a moratorium on the use of the law pending a review, but decided to grant the exemption on Friday to deal with the current situation.

Apart from the Sedition Act, Muhyiddin said the exemption was also granted for the use of Section 233 of the Communications and Multimedia Act 1998 (CMA).

"The cabinet agreed with my view, as well as that of Communications and Multimedia Minister Gobind Singh Deo on the moratorium in relation to the two laws - the Sedition Act and CMA.

"The moratorium meant that they cannot be enforced pending the review on whether to amend or repeal.

"But owing to the current situation, particularly in relation to the temple matter, the cabinet agreed that the police can act based on the provisions of the existing laws," he said.

Muhyiddin said this after paying a visit to the temple in Subang Jaya this evening.

Early Monday morning, the temple was the scene of rioting after devotees and a group of men hired to guard the area clashed.

The temple was earmarked for relocation on Nov 22, following a consent judgment in court, but could not proceed due to disagreements.

Muhyiddin previously said the developer which owned the land on which the temple sits had hired the group of men, but One City Development Sdn Bhd denied the claim.

The riots spilled over to Tuesday, when thousands of supporters gathered near the temple in the wee hours. Fresh rioting broke out, and some attacked Fire and Rescue Department personnel, gravely injuring a firefighter.

The moratorium on several laws was implemented in October after Gobind raised the matter in the cabinet.

The several laws in question are being reviewed by Putrajaya, including Section 233 of the CMA, Sedition Act, Security Offences (Special Measures) Act 2016 (Sosma), Prevention of Crime Act 1959 and other laws that were claimed to be open to abuse.

Section 233 of the CMA concerns the misuse of network facilities of services. It has been criticised for its vague wording, which allegedly allows it to be arbitrarily enforced.

Following the temple riots, Gobind had indicated that he was prepared to enforce Section 233 of the CMA in relation to the incident.