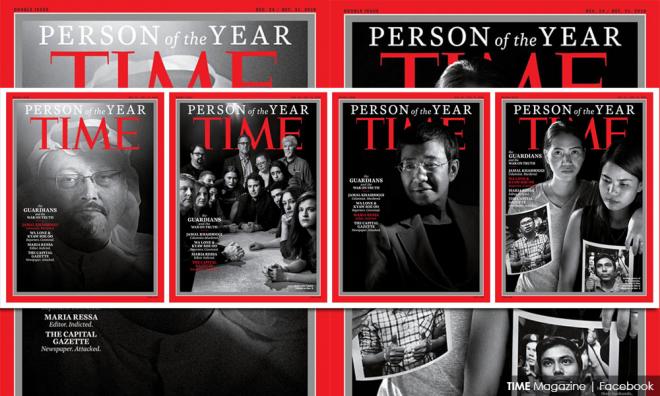 Time's 'Person of Year' goes to journalists, including Myanmar pair

Time magazine on Tuesday presented its “Person of the Year” honour to a group of journalists, including a slain Saudi Arabian writer and a pair of Reuters reporters imprisoned by Myanmar’s government, as the magazine warned the ideal of truth as critical to democracy is under assault.

The publication also honoured the founder of a Philippines news website critical of that country’s authoritarian government and a Maryland newspaper that was the target of a mass shooting, marking the first occasion in the magazine’s 95-year history that Time has bestowed the distinction on its own profession.

A cover story in the issue highlighted the role of journalists, including Reuters’ Wa Lone and Kyaw Soe Oo, who Myanmar imprisoned for violating a state secrets act and Jamal Khashoggi, a Saudi writer and critic of the nation’s de facto ruler Crown Prince Mohammed bin Salman, who was slain two months ago inside the Saudi Arabian consulate in Turkey.

“I hope that this is received by the public at large, far, far beyond the United States, as a reminder of the importance of defending free expression and the pursuit of truth and facts,” Ben Goldberger, Time magazine’s assistant managing editor, said during an interview. “That is the baseline for all free societies. Democracy certainly cannot function without a shared understanding of the facts.”

The annual distinction is intended to recognise the person, group, thing or idea that had the greatest influence on world events that year. It has been given to a wide range of influencers over the decades, from US civil rights activist Martin Luther King Jr and Queen Elizabeth II to Adolf Hitler, the leader of Nazi Germany, who was honoured before the start of World War Two.

Wednesday will mark one year since Reuters journalists Wa Lone, 32, and Kyaw Soe Oo, 28, were imprisoned for their work investigating the killing of villagers from the Muslim Rohingya minority by Myanmar’s security forces and civilian mobs. They were convicted on Sept 3 under the colonial-era Official Secrets Act in a case seen as a test of democratic freedoms in Myanmar.

Khashoggi was killed two months ago at the Saudi consulate in Istanbul when he went there to collect documents for his forthcoming marriage. He was the first person to be named a Time Person of the Year after his death.

US senators briefed by the Central Intelligence Agency have said they are certain that the Saudi crown prince was responsible for Khashoggi’s killing, a view US President Donald Trump has said he is sceptical of. The crown prince has denied knowledge of the operation that killed Khashoggi.

Time also honoured Maria Ressa, the founder of the Philippine news site Rappler that has been a frequent critic of Philippines President Rodrigo Duterte, and the staff of the Capital Gazette newspaper in Annapolis, Maryland, where a gunman shot and killed five people in June.

Ressa and her site were charged with tax evasion by the Philippines’ Justice Department in November.

The four groups were highlighted on four separate covers of the magazine, one of which features the wives of the imprisoned Reuters reporters embracing one another as they hold photos of their husbands.

“We couldn’t be happier with @TIME’s choice for Person of the Year,” the Society of Professional Journalists said on Twitter. “In 2018, journalists gave their lives and freedom in pursuit of telling the truth. Their sacrifices deserve to be recognised.”

Goldberger emphasised journalism’s vital role in providing the information needed for democracies to function: “These guardians are the ones fighting the war on truth and the war against misinformation. It is one of the most essential jobs in the world.”