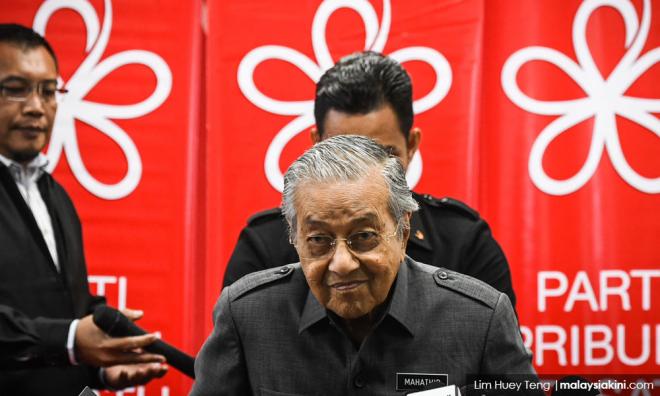 Mahathir's resignation is not an option

COMMENT | After waves of defections in Sabah, potentially across the country, Kim Quek, an independent writer, affirmed that Prime Minister Dr Mahathir Mahathir must resign to "save Reformasi."

Kim's embedded argument seems to be this: Mahathir, by extension Bersatu, is trying to 'sleep with the enemy', Umno.

There are five powerful reasons why Mahathir and Bersatu need not be apologetic over the waves of defections. Kim should get a pen and a paper to note them down, precisely because these arguments will only be made once, and they are final.

First of all, defections do not automatically mean that all these MPs, assemblypersons and senators will join Bersatu, as Mukhriz Mahathir explained to the media yesterday.

If anything, one joined Amanah in Sabah last week. Many remain independents, as they would be subject to further scrutiny to verify if they have truly repented.

As things stand, Bersatu has not become the most powerful party in Parliament, contrary to what some press reports have said.

With 19 MPs, Bersatu remains a minority party. In contrast, DAP alone has 42 MPs, while Anwar Ibrahim's PKR a fraction more at 50 MPs. Such numbers are telling. Bersatu remains well behind.

Secondly, not unless all 47 remaining MPs in Umno do join Bersatu (but no one else) can one claim that Bersatu has become the most powerful party in Malaysia. This is by absorbing the ranks of Umno that continue to rankle under the leadership of party president Ahmad Zahid Hamidi.

However, as can be demonstrated by the statements of Mahathir and Muhyddin Yassin, only Umno members who have not got themselves enmeshed with the grand corruption of the previous administration would be entertained as aspiring members of Bersatu.

Even these statements were made with the caveat that the presidential council of Pakatan Harapan will be kept informed of each of these "movements.”

Thirdly, counterparts like DAP and PKR in Harapan have repeated time and again that they will not work with former Umno members with suspicious motives.

PKR vice-president Xavier Jayakumar has gone as far as insisting that these former Umno members can only be accepted if they are willing to serve as the whistleblowers against their old party. He said they must also pledge their loyalty to the incoming prime minister, Anwar Ibrahim.

DAP deputy chairperson Gobind Singh Deo did not go as far, but he did register his vehement comment that DAP won't work with rotten apples from Umno.

Fourth, when Harapan component parties are dead set against the derelict members of Umno, Bersatu cannot disrespect their views. Bersatu won't. Besides, it boggles the mind that the rise and fall of Reformasi is now contingent on removing Mahathir as Kim asserted.

Was it not Mahathir who was the first to be brought into the fray to face down Umno and PAS on May 9? He did his job, and Umno and PAS are still reeling, precisely due to the larger-than-life role he played in their defeat.

Fifth, the level of support of Malays after May 9, while encouraging, remains low at 25 to 30 percent. To create a new Malaysia, where 60 to 65 percent of the population are Malays, it goes without saying that Harapan must not be too quick to spurn their Malay representatives.

Anwar would have no problem in accepting the MPs and state assemblypersons, too, as and when they decide to pledge their loyalty to him.

In all, Umno is difficult to digest as an entity. This is why Harapan must be alert and vigilant in accepting some and not all.

Besides, there is nothing sinister about interacting with the defecting MPs if they haven't been charged or convicted by the rule of law.